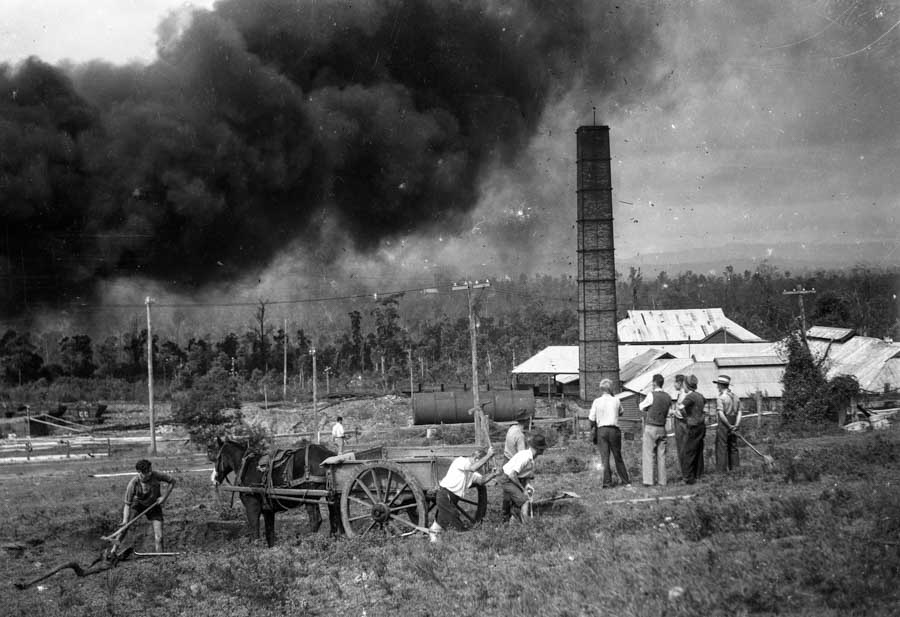 On April 22, 1946, some residents of Cessnock were told by police to evacuate their homes and remove their children to safety. A Catalina flying boat from Rathmines RAAF base was going to drop bombs nearby, and authorities wanted to make sure there were no accidental casualties.

The unexpected evacuation order had nothing to do with the widespread severe flooding across the Lower Hunter at the time. Instead, it was fire that prompted the demand. Earlier that week a disused portion of Cessnock No. 2 colliery had caved in and caught fire, with the ferocious underground blaze spreading rapidly and causing severe subsidence across a wide and growing area. The golf course lost a green and a pall of dense black smoke covered West Cessnock as mining experts exchanged views on how to solve the problem.

It has been suggested that the superb 10m coal seam at Cessnock No. 2 should have been mined using open-cut methods, since it had little more than 12m of overburden above it. But during World War II, it appears, the government pushed for the coal to be worked from underground.

At Easter, 1946, previous predictions of possible collapse, heating and fires if the rich seams were worked from underground were proved correct. As the seam caught fire and fiercely burned, flames burst to the surface and shot 10m into the air. As fires tore through the coal seam, great sink-holes appeared in the ground around the district and pungent fumes troubled residents.

Explosives were used to blow in the sides of the craters and soil was dumped in. Rescue teams, at risk to their own safety, went into the mine workings to build brick seals and isolate the doomed pit. Miners from all over the district joined in the huge job of controlling the blaze. Two men – Dave Hartcher and Bert Kemp – were injured while shovelling earth into the mine tunnel. An explosion blew the pair towards the tunnel mouth and they would have been sucked into the pit if other workers had not leaped in to haul them out.

Meanwhile, firefighters pumped huge quantities of water into craters on the western edge of the burning area.

The idea of bombing the mine from the air came from colliery manager Wilson Barrett, who contacted the Minister for Air, Mr Drakeford, insisting that only aerial bombing could contain the fire and stop it spreading into nearby Aberdare Extended colliery. A RAAF Catalina was assigned to the job, with pilot Squadron Leader R.H.S. Gray, DFC, briefed to fly at 2000 feet and drop 500lb and 250lb bombs on a strip measuring about 500m by 200m.

A furious reaction came from worried residents and senior mining officials, including District Check Inspector W.H. May, who doubted the bombing would do much good, and feared it might do a great deal of harm. In this case, the wishes of the Cessnock locals prevailed over the demands of the mine manager and the bombing was called off at the last minute. More conventional means were used to starve the fires of oxygen, and teams of men worked around the clock, bringing the blaze under control by the end of the month.

The Minister for Mines, Mr Baddeley, said he planned to introduce new laws to force mine owners to take responsibility for similar occurrences in future. “They exploit the wealth in the soil and must shoulder the responsibility,” he said. “In the past they looked to the Government, but that has to cease.” It is not known whether these proposed laws were ever enacted.

The Coffee Pot, at Toronto and Merewether