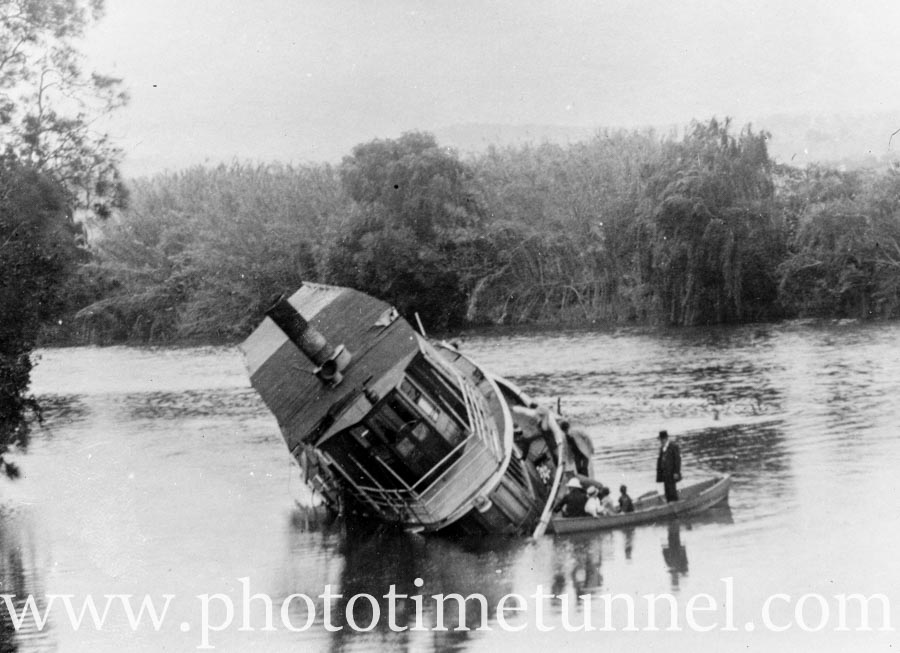 For a number of years early last century, riverboat excursions from Newcastle Harbour to destinations such as Hinton, Seaham and Paterson were popular. Steamboats of various shapes and sizes (including at least one retired Sydney Harbour ferry) took hundreds of passengers at a time on picnics, hikes and cruises. One of the boats was the Guthrey, (referred to as a “funny” vessel in this post:

The day after Christmas, 1912, the Guthrey suffered an embarrassing incident, as reported by The Sydney Mail in its issue of January 8, 1913:

On Boxing morning the Guthrey, with flags flying and between three and four hundred happy people on board, left Newcastle in true picnic style with the intention of sailing up the beautiful willow-bordered Paterson River to the Paterson township, about 52 miles away. At a bend of the river, about 400 yards from Dunmore Bridge, there was a grating sound, followed by a jerk and a swaying of the boat; then the Guthrey settled down on a projecting rock that lay hidden by the high tide. For a time there was a slight commotion on board, but on the whole the passengers behaved splendidly. The engines worked so vigorously that part of the river seemed to be a great boiling cauldron, but all in vain. The Guthrey did not move an inch. Then the captain decided to land his passengers and in about an hour all were taken ashore in three small rowing boats. As the tide lowered the boat gradually listed, until in a very short time she was lying quite on her side, helpless and deserted. The excursionists found that by walking 2 ½ miles to Mindaribba station they could get a train on its way to Newcastle from Dungog, and about 200 of them set out. Many others, however, preferred to wait until a boat arrived from Newcastle. At midnight the Shamrock reached the spot and took the party away. On Friday last the Guthrey was got off the rock with the help of the Butter, the Bluebell, the Commerce and a pontoon, and it was decided to dock her.

While the boat was stranded, photographers had fun taking pictures from the bank.

To read about another interesting river excursion mishap, read the post embedded below:

Putting a label on it: ephemera from all over