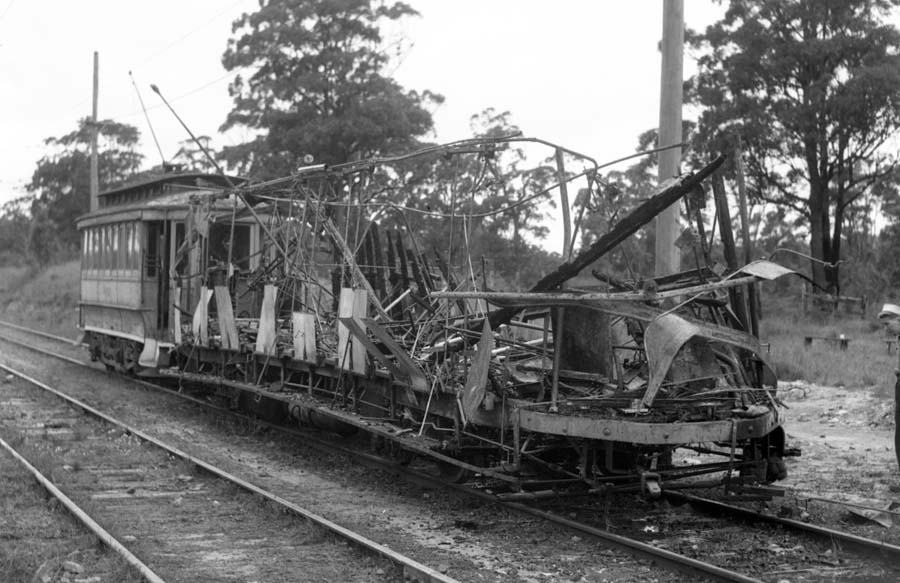 Burnt-out tram after a fatal crash at Jesmond on October 11, 1943

As a career fireman, transport collector Ken Magor naturally accumulated many photographs of accidents and disasters. Here are some more tales of vehicular tragedy and misadventure from our Ken Magor archive.

At 11.30 am on 11th October,1943, tram driver Fred Quayle, 41, of Wallsend, was taking a two-car tram set bound from Newcastle to Plattsburg and Wallsend. He left Howe Street, Lambton, and began the 1 in 30 ascent over the Lambton range. At the top, he began the descent towards Wallsend, approaching Robinson Street. Meanwhile, another coupled set of trams had entered the Jesmond embankment from Wallsend, bound for Newcastle, and was also heading towards Robinson Street.

At the same time a council truck was driving along Robinson Street from Newcastle Road, on its way to the nearby army camp – in the area which later became the drive-in cinema –  to collect the sewage effluent from the camp.

There was a compulsory tram stop at Robinson Street but since there was only minimal traffic connected with the army camp few tram drivers actually stopped there. As Fred Quayle’s tram approached Robinson Street, probably at speed, he could see the Newcastle-bound tram which stopped at the compulsory stop, but could not see the council truck because the bulk of the Newcastle-bound tram blocked his view. He did not stop at the compulsory stop. The Council truck driver likewise could probably not see Mr Quayle’s tram.

Fred Quayle saw the truck too late to stop. He tried to jump out of his tram on the right hand side. In the collision, the truck hit the heavy tram controller and pinned Mr Quayle against the bulkhead of the tram. The drawbar punctured the truck’s petrol tank and sprayed petrol over the front of the tram, starting a fire.

Two soldiers tried to pull Mr Quayle from the burning wreck but neither they nor the crew of the other tram were able to get him out in time to prevent severe burns. Eventually, Mr Quayle was removed from his tram and taken to Wallsend Hospital where he died. He was buried at Wallsend Methodist cemetery under a plain stone with only his name.

The tram – burnt to a skeleton – was taken to the depot and scrapped.

Car versus train at Adamstown

George William Pollard, 52, stepped out of his smashed car without a scratch after he drove into the path of a loaded coal train at a level crossing in Newcastle, NSW, on March 29, 1956.

Mr Pollard, of Warners Bay, told The Newcastle Sun that he had just come around a curve and was on the level crossing at Park Avenue, Adamstown, before he realised a train was coming. He braked and tried to reverse but the car stalled. The train, pulled by a 51-class steam locomotive on its way from Belmont to Newcastle, smashed into the car and pushed it 60m along the tracks. The train driver tried to stop, but had little room to work with. He told the paper that, when he finally managed to stop the train, he saw a leg sticking up out of the smashed car’s window. Next, the motorist clambered unhurt through the windscreen.

Workmen tried in vain to separate the vehicles and had to call another locomotive to pull the crumpled car away from the coal train.

Another tram versus truck at Jesmond

Tram driver Ronald Boyce, 30, of Belmont, was hospitalised after this crash at Jesmond crossing on June 6, 1949. Leaving Wallsend at 1.30pm the tram – a coupled set carrying about 45 passengers – hit the truck where Wallsend Road crossed the line. Ambulance men and tram passengers helped pull away wreckage to free Mr Boyce. Nobody else was injured.

On the morning of December 5, 1947, a tram and truck collided in Scott Street, Newcastle, near the Railway Station. The tram was pushed off its tracks, leapt the adjacent set of lines and stopped just short of the footpath. An elderly woman was the only passenger on the tram and she was unhurt.

Fatal bus crash at Murphy’s Corner, on the Minmi Road

A girl was killed and 17 Minmi residents were injured when a bus crashed over an embankment on the Minmi Road 1.6km from Wallsend shortly before midnight on November 4, 1942. The dead girl was Isabelle Archibald, 17. She was pinned in the crashed bus with four other male passengers. Ambulance officers had to get help from nearby residents to free the trapped people. About 100 residents helped, many by bringing torches and lanterns to aid the rescue.

The bus was travelling to Minmi from a Wallsend theatre. According to a newspaper report, “the bus left the road as it was negotiating a turn in a depression between two hill”. It fell three or four metres from the road and rolled until it came to rest on its hood, four or five metres away. The injured were taken to Wallsend Hospital.