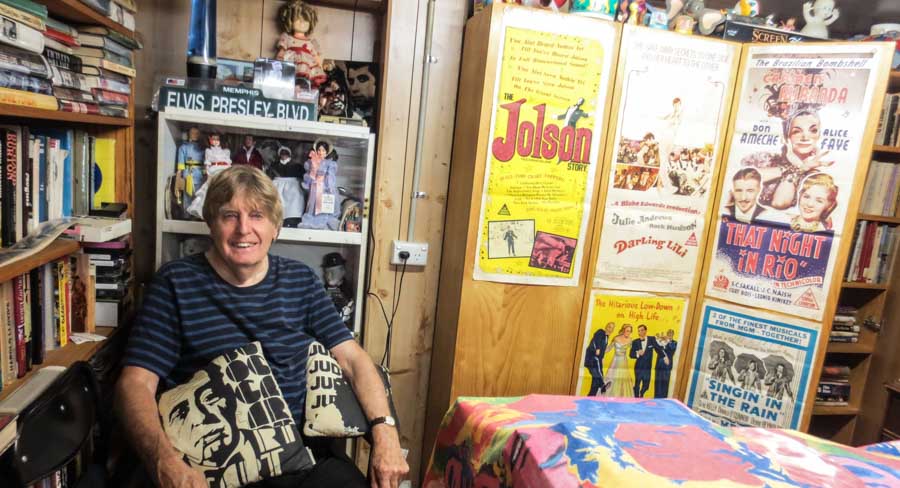 Some people probably know more about movies and shows than Allan Richards, but you aren’t very likely to meet one of them. Allan’s knowledge of the film industry – and especially the musicals that are his greatest passion – is truly encyclopaedic.

Allan started seeing movies at the age of four and never stopped. As an adult he took to live theatre, performing in a string of musical comedy roles, spent his little spare time providing entertainment spectacles at air shows and other events, dressed as “Buttons” the giant orange cat for his local television station’s promotional occasions and built a library of DVDs and movie-related books and memorabilia that occupies a large part of his house. He talks – without notes of any kind – for hours on end about the shows and stars he knows so well, and is in growing demand as an entertaining public speaker.

Born in 1944, Allan started his life in the suburb of Adamstown, Newcastle, NSW, at a time when radio and cinema dominated popular entertainment. His father worked at the city’s Lysaghts plant all his life, and his mother worked in her mother’s hamburger shop at Broadmeadow, doing a frantic trade for the post-movie clientele of the nearby Century Theatre. The burgers were cooked in the window so all could see, and the customers were often six-deep at the counter.

His mother loved movies, and took him to see them at almost every opportunity. She also worked as a cleaner at cinemas including the Civic and the Royal in Newcastle, and sometimes would take Allan to work with her at 4am, letting him wander the buildings, soaking in the atmosphere.

“After I started school Mum used to pick me up in the afternoon and we would go straight into Newcastle in time for the five o’clock session,” he recollected.

And while he was watching movies whenever he could, he was also starting a library of movie books that grew in size every Christmas and birthday. “Every Christmas my mother would give me two or three movie annuals, and I’d get another from my grandmother and one from an aunt. There was the Picturegoer, the Picture Show, the Hollywood Album, the Boys Cinema Annual. And every week I’d buy the magazines. I’d get the two English ones, the Picturegoer and the Picture Show, when they came out on Tuesdays. Then you would have the Australian Photoplayer, Photoplay and Movie Life and then there were some American ones. Screen News you used to get at the Hoyts cinema. I’ve got about 50 years of those.”

Allan recalled going to a revival of The Wizard of Oz at Newcastle’s Victoria Theatre – which only screened MGM films. That was in 1948, when Allan was just four years old, and he still remembers being so afraid when the witch made her appearance that he hid under the seat. Later, during school holidays, Allan went to the Victoria to see shows like Easter Parade, Little Women and Good News. Incidentally, the Victoria was the first to show Gone with the Wind in Newcastle. Tickets to that show were so expensive his mother couldn’t afford to buy them but was lucky enough to be treated by a friend.

Living in Adamstown Allan also went to the suburban cinema that was just a street away from his home. “As a family we used to go there every Wednesday, Friday and Saturday night.” “Plus on Saturday I’d pack a lunch and get a bus into Newcastle and watch a movie at 11 o’clock. I’d come out of that, get a bus from the Royal to the Civic for the two o’clock session then I’d come home – nearly always with a  migraine headache – throw up then go back to the movies at half past seven that night. So I’d see three movies on a Saturday.” (Allan agrees the movies may have had a role in the migraines, but they stopped when he turned 12.)

He recalls paying ninepence for a movie ticket, and thinking it was terrible when the price went up to a shilling (12 pennies). It was only a penny for him to catch a bus to Newcastle. With little extra spending money he didn’t lash out on too many treats. He steered clear of the orange drinks because they were “so watered down” but he would buy a packet of Smith’s crisps for sixpence when the budget allowed.

After attending the children’s matinee at Adamstown he would go next-door to the Ritz Café for a shilling’s worth of chips and some threepenny scallops.

The advent of Cinemascope in Newcastle in 1954 was a big event. Allan explained that Cinemascope had its origins in the USA as a fightback by the cinema industry against the growing competition from television. Returned servicemen came home with deferred pay and bought television sets, suddenly robbing the cinemas of clientele. Cinemascope featured a much wider screen and was also accompanied by stereophonic sound.

The first Cinemascope film was The Robe – a religious extravaganza – shown in Newcastle at the Civic.  “In those days they had continuous sessions from 11 o’clock in the morning. So you had 11 o’clock, two o’clock, five o’clock, eight o’clock and you could stay if you wanted to. Or you could walk in halfway through the movie and catch up on the first half in the next session. I remember going into The Robe and the crucifixion scene was on. To a kid this wide screen and stereophonic sound was overwhelming”.

While the main cinemas converted their screens for Cinemascope, the suburbans were naturally slower to adapt. One of the first suburban cinemas to convert was the Century Theatre at Broadmeadow. This forced the nearby smaller cinema at Adamstown to try to compete, and it offered double feature revivals on Wednesday, Friday and Saturday nights. “Ranch nights” were a variation on the theme, featuring double Westerns, and many suburban cinemas followed the same formula.

Allan marvels that western films and musical went out of fashion. “I never thought I’d live to see that happen,” he said.  “Musicals in the 1950s were really big time, and then they just went out our fashion,” he lamented.

While his mother was cooking burgers near the Century, much closer to the cinema was the famous pie cart. “In the winter to come out of the movie and have one of the pasties from the pie cart was heaven on a stick,” Allan recalled. “They had hot coals to keep the pies hot. It was really great.”

Among his many pieces of memorabilia is a keepsake of the now-demolished Century – a single brick from the structure which was torn down following the 1989 earthquake in Newcastle. A friend who lived nearby rescued it for him. He now keeps it with a piece of timber from a wooden fence that once stood outside Elvis Presley’s Graceland mansion in the USA. The man who made Elvis’s studded belts salvaged the bits of timber and made money selling them to fans.

All the while his passion for show business loomed large, and for 40 years he was deeply involved in amateur theatre in Newcastle, doing shows with Metropolitan Players, Newcastle Theatre Company, Young People’s Theatre, Gilbert and Sullivan players and a few stints of dinner theatre.

“The first show I did was Bye Bye Birdie,” he said. “I’d only been learning to sing for three months and my singing teacher encouraged me to try out for it. I rang the director and told him I’d like to play the lead. I’d been in no shows before that, had been singing only three months and couldn’t dance. He must have thought I was mad, but he tried me out and I got the role. I got it and I did it and I got rave reviews.” That was 1969. The following year he played Cornelius Hackl in Hello Dolly. Over the years other shows followed, including Les Miserables, Oliver and Peter Pan.

Asked about his stints as “Buttons” the cat for Newcastle television station NBN, he smiled ruefully. “It was hard work, mostly,” he said. “The costume was three-layered and very hot.”

Allan married in 1970 and his wife, Laura, is kindly indulgent of his hobbies. in 2004 and he took the first of nine trips to New York, mostly to see shows. His record, he proudly boasts, was 19 shows in 16 days.

While his knowledge of the life and times of many film stars is vast, his favourite is Doris Day, whose fan club he was part of for a number of years. He was drawn to her cheerful and wholesome screen persona – projected through feel-good 1950s musicals like Calamity Jane – even though he knew her real life was “terrible”.

His collections of memorabilia are truly daunting to view, and represent years of diligent scouring of the bookshops of Newcastle, not to mention other kinds of effort. He pulled out of a set of old movie star bubblegum cards, for example. “I chewed my way through so many packets of Maple brand bubblegum to get this full set,” he said. “You only got one card per pack and each pack cost threepence. In the end the shopkeeper would let me look to see what card was in each pack before I bought it, to save me some money.”

He still has a little locket he bought from the tobacconist stall that used to be in a shopping arcade at the eastern end of Hunter Street. When it opens, tiny photos of screen actresses are concertinaed inside.

One of his most prized collections is movie-related sheet music, which he uses as his sole prop when giving his talks on the film industry. He does five or six one-hour presentations for each of decade of movies and musicals, and he takes his audience down a myriad rabbit-holes full of minutiae and surprising trivia about the shows and the players.

These are an extension of the presentations he used to give at the Regal Cinema at Birmingham Gardens, in Newcastle, where he would show a musical and provide a supper, with the joyful cooperation of fellow film-buff and Newcastle cinema legend Bruce Avard.

The dairy herd travelled by punt