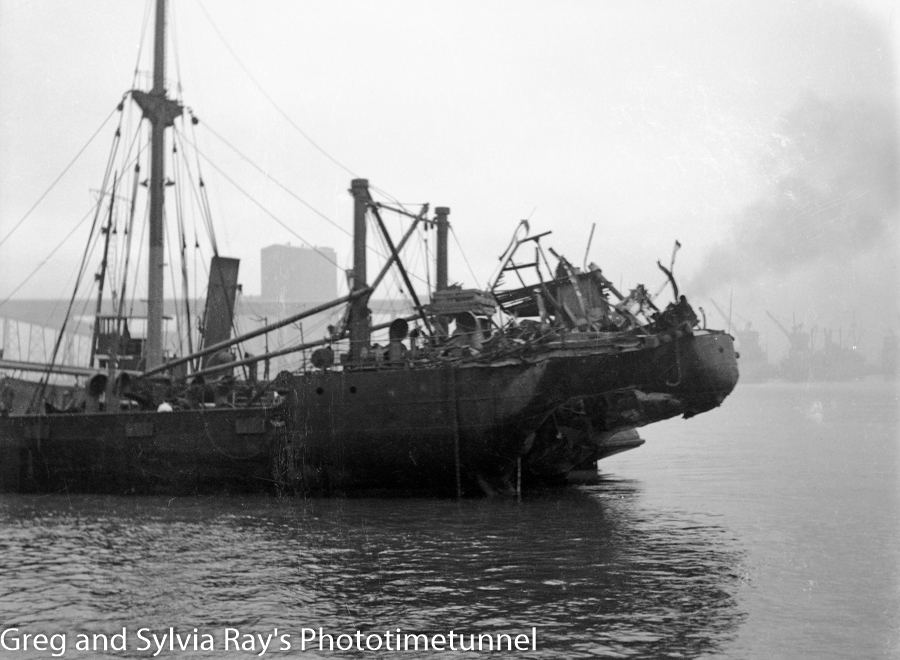 WHEN a torpedo-damaged freighter was towed into Newcastle Harbour in July 1942, at the height of Japan’s deadly submarine campaign against Australian shipping, a Newcastle Herald photographer was on the spot to capture some extraordinary images of the crippled ship and its wounded crew members.

But the superb dramatic photographs weren’t published. Tight censorship by the government, preventing the publication of bad news that might harm public morale, saw to that. The negatives were filed and forgotten for decades, before passing out of the newspaper’s ownership during a “downsizing” in the 1970s when collector Ken Magor rescued thousands of doomed negatives from probable destruction.

Mr Magor, a land transport enthusiast, left the envelope containing the censored shots untouched for the rest of his life. When he died, the part of his massive collection that contained them was auctioned and came by chance into our hands.

When I first saw the negatives, labelled “SS Allara”, I was curious to learn more about what appeared to be a maritime accident of some kind. My first internet search revealed that the Allara was an Adelaide Steamship freighter that was torpedoed while carrying sugar from Townsville to Sydney in 1942.

But the most useful find was a 2006 letter, published on the website, www.afloat.com, by Fred Thomas of Carey Bay, Lake Macquarie, who had served on the ship years after the war ended. Sadly, the letter appears to have been taken down from the site.

Fred’s letter was useful, mostly because it alerted me to the nickname of the Allara’s wartime skipper, Captain Colin “Baldy” McLellan. “Baldy” rang a bell with me because I had been reading an old paperback book, published in 1945, titled Ships in Battledress by J.H. Adams. That book contained a chapter describing the experience of an Australian freighter, attacked but not sunk by a Japanese submarine. The freighter’s skipper’s name was given as “Captain Baldy”. The book was published in wartime, so the names of ships and most of the people mentioned were omitted or disguised. Fred’s mention of “Baldy” made the link.

The Allara was on its way from Cairns to Sydney with a cargo of sugar on July 23, 1942 when, at 5.15am, it was unlucky enough to encounter the Japanese submarine I-175 about 25 nautical miles off the coast of Newcastle. The sub fired two torpedoes, the first of which struck the ship in the stern, blowing off the propeller and rudder and wrecking the wireless antenna. The explosion, directly beneath the spot where 22 men were sleeping, killed four crew outright and seriously injured another three, one fatally.

Ships in Battledress  described how ‘Captain Baldy” ordered the helm hard over seconds after the torpedo impact. The engines were running but the propeller and rudder were gone. The second torpedo narrowly missed the ship’s stern.

The crew struggled to the deck with their injured mates while the submarine surfaced nearby. Japanese sailors emerged and fired a shell from a deck gun across the ship’s bows, signalling the Australians to  abandon ship. The Japanese, seeing the ship settling, presumably believed it would sink, so the submarine dived and left the area. They would also have been anxious to submerge and leave the area as daylight was coming on.

After an hour in the lifeboats it was clear to the crew that the Allara wasn’t in immediate danger of sinking, so the men went back aboard. Straight after the attack the wireless operator had sent out 40 distress calls, but the ship’s aerials had been blown away. Back aboard, he rigged a replacement and sent an SOS. The crew worked the pumps full-time to keep the vessel afloat while two navy tugs raced to the rescue, arriving alongside at 9.45am. Later that day the tug Heroic, from Newcastle, took over the tow. Allara arrived in the port with its stern so badly damaged it seemed incredible the ship should still be floating.

Author Adams continued the story: “Silently the seamen lined the rails as their dead and wounded mates were carried ashore on stretchers. Then came the walking wounded, and an imperturbable seaman Paddy, who hobbled down the gangway with an injured foot and a permanent grin. ‘We’ll be seein’ you,’ yelled his uninjured mates. ‘I’ll be back!’ shouted Paddy.

“In a waterfront hotel the men were drinking rum and milk. Frank Grant, 16-years-old deckboy from Sydney, sipped lemonade and blushed – not because his beverage was lemonade. But his shipmates were saying to the crowd in the bar: ‘Give young Frank a hand. Why, he’s the bloke who was blown right out of his bunk and then jumped to his feet to drag one of his wounded mates up to the deck!’”

Allara was towed to Sydney for repairs and was back in service in April, 1943. The ship continued to operate in Australian waters until the 1950s. According to a memorial erected to merchant mariners lost in the war, the names of the ship’s dead crewmen were J.D.A. Bromilow, F. Noble, A. Smith, A.T. Sundell and H. Talbot. They are buried at Newcastle’s Sandgate cemetery.

The submarine I-175, under commander Tabata, continued on its destructive path, sinking two merchant ships and damaging two more before leaving Australian waters. In 1943 it sank an American aircraft carrier, the USS Liscome Bay, and was itself lost with all hands later that year.

The story of the Allara, disguised, featured as an element of the story in Dymphna Cusack’s 1953 novel, Southern Steel. “Southern Steel” is the name used in the book for a big steelworks – obviously Newcastle’s BHP plant. The book paints an interesting picture of Newcastle in wartime.

In 1952 the Allara hoisted the Panamanian flag and was renamed Santelina.

The story of the Allara was told in our book, Newcastle, the Missing Years:

Woodlands and Ellimatta homes for boys and girls in the 1940s