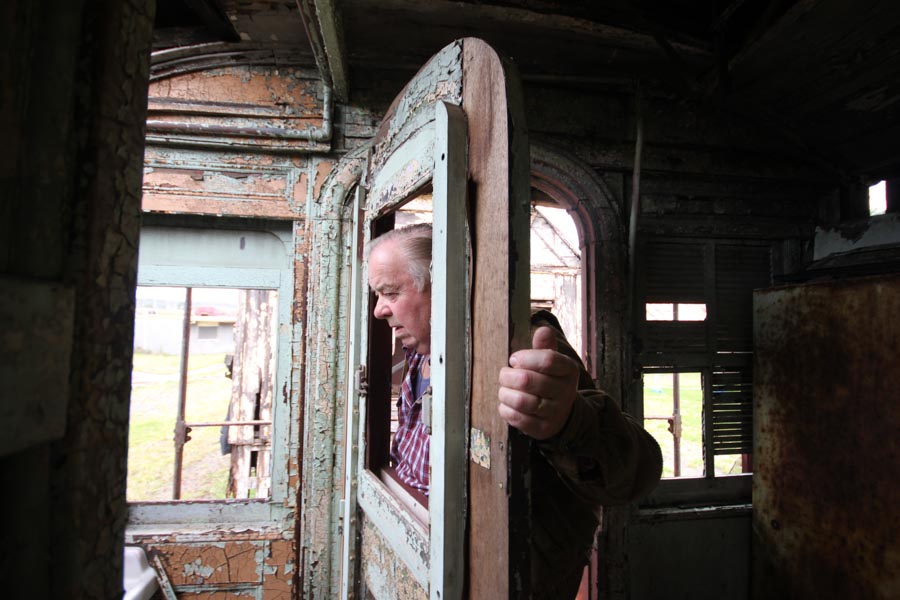 Wayne Dempsey’s dream, as a young man, was to work on the railways. Specifically, he wanted a job at the Eveleigh carriage workshops at Redfern. “I haunted the place, as a boy,” he said.

He distinctly remembers the day in 1962 when – aged 18 – he turned up to apply for a job there. “The deputy manager told me all about the place then asked me what I was interested in,” Wayne recalled. “I told him I wanted to work on the wooden cars, so he took me to see where they used to overhaul American car sets.

The all-timber “American suburban” cars became a lifelong passion for Wayne, now aged 74, and he almost cries when he talks about how many of these lightweight, reliable and incredibly durable carriages were smashed and burned by the rail authorities in the 1970s.

Wayne’s first job was on the traversers. One traverser was up near Redfern and the other was down at the lower section. “We had a capstan and a hook that we used to put under the carriage to pull it out and put it into the correct road for whatever work was being done on it. Later on we had a bloke with a tractor and he used to do most of that work for us,” Wayne said.

Next, he got a job as a carriage-builder’s assistant at D2, where most of the Newcastle cars came in for their regular overhauls. This appealed to Wayne because the Newcastle rolling stock tended to be very old. Some of the cars had been there, he said, since 1890. “This was 1966 and they were as good as bloody gold,” he said. “We had 388 American Suburban cars and they were the backbone of the fleet”.

Wayne said the first of the American Suburbans in NSW came out in the late 1800s from Jackson and Sharp in the USA. A number of different types were imported from different makes and tried before the favoured design was chosen. From then on, the carriage works built and maintained hundreds such cars.

He has albums full of photos, and he can tell the stories of many of the cars, from their origins to their demise. “The bogies were timber too: we were belting them along at 70 miles per hour and never had a problem,” he said.

Wayne proudly recalled the time when the workshop men realised the virtues of Masonite as an external cladding, giving it such a glossy finish that most people assumed it was metal. “Some salvage men bought a heap of the cars thinking they were getting their money back in scrap metal,” he said. “I believe they wept when they realised the truth. There was hardly any metal in them anywhere.”

In 1973 NSW railway authorities started the mass destruction of the American Suburbans when new managers declared that the elderly carriages were not a good look for a modern railway system. “Didn’t matter how good they were, they just had to go. We were burning cars that had just been overhauled. We had some had been in traffic for 80-odd years,” he said. Indeed, some venerable specimens remained on the tracks well into the 1970s, running to and from such destinations as Maitland and Toronto. Wayne retired in 1999.

Some of the American Suburbans can still be found here and there, in collections and museums. But the elements and disasters – like bushfires – have taken a terrible toll. Wayne’s greatest wish is that the State Government would realise the heritage value in more of the old cars and put more effort into restoring and preserving them.

As a case in point he mentions a sleeping car imported from the USA in the 1880s, recently seen sitting behind Broadmeadow yards in Newcastle with its roof caved in. “It breaks my heart to see the decay,” he said. “It’s such an unnecessary terrible waste.”