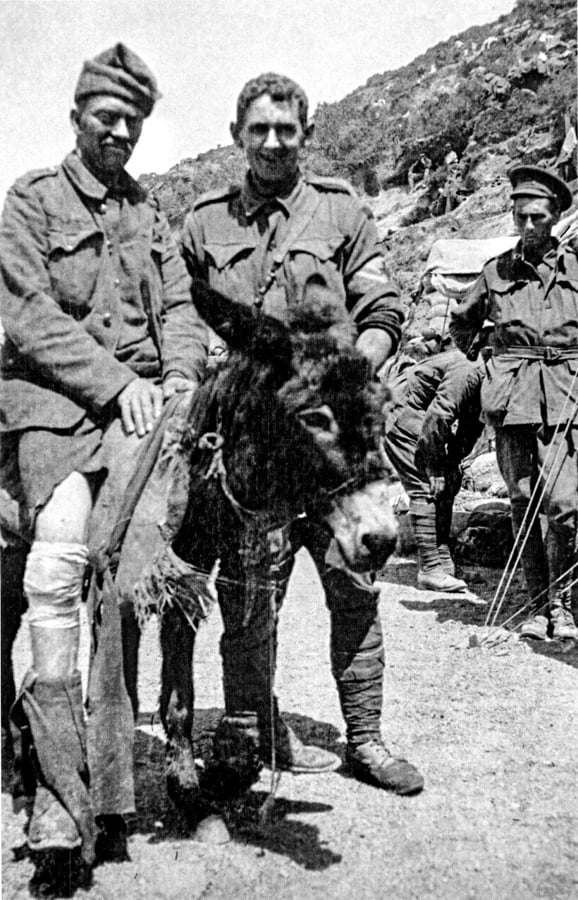 John Simpson Kirkpatrick, with donkey and wounded man at Gallipoli

John Simpson Kirkpatrick, perhaps the best-known Anzac of them all, had some ties to Newcastle. The subject of repeated calls for recognition with a posthumous Victoria Cross, the famous “man with the donkey” was a popular figure on Gallipoli because of the huge risks he ran in order to rescue wounded men.
Like many other Anzacs, Kirkpatrick was British. A “Geordie” from England’s industrial Tyneside, he left school at 13 to work as a milkman and on ships in the Mediterranean. In May 1910, aged 18, he arrived in Newcastle, NSW as a crew member on a merchant ship. He deserted the ship on May 13 and changed his name to John Simpson, probably to avoid being sent back to sea.
Once in Australia Simpson became a swagman, making his way to Queensland where he worked on sugar plantations and on cattle stations. Later he worked his way back down the coast on local trading ships, and spent some time working in coalmines at the Illawarra.

During his travels he spent more time in Newcastle, and among about 70 letters (mostly to his mother) held in the Australian War Memorial, are several sent from the city. His letters reveal that Simpson was a keen trade unionist. He loved to compare the decent living wages and industrial freedoms of Australia with the oppressive conditions in England. He wrote:

I often wonder when the working men of England will wake up and see things as others see them. The working man out here votes for a Labour Government but the man at home has not got the sense for that. He must go and vote for the first big Liberal capitalist that puts up for the seat.
What they want in England is a good revolution and that will clear some of the millionaires and dukes out of it and then with a Labour Government they will almost be able to make their own conditions. I am enclosing a PN for a quid [postal money order for a pound in currency].

“What they want in England is a good revolution”

Simpson returned to the sea, went to Western Australia and became a gold miner. When war broke out he enlisted, apparently hoping to be shipped to England to be reunited with his mother. Instead, the 22-year-old was put ashore at Gallipoli where he lasted just 24 days before being killed by a Turkish sniper.
A member of the 3rd Field Ambulance, Simpson was nicknamed “Scotty” or “Murphy” by other diggers who couldn’t place his accent. He discarded his slouch hat in preference for a seaman’s leather peaked cap. He commandeered a donkey (the donkeys had been brought ashore with Greek drivers to carry water, but the drivers, suspected of being spies, were taken off Gallipoli). He put a stretcher bearer’s armband around the donkey’s head, named it “Duffy” and got permission to operate as a one-man unit, bringing wounded men in for attention.

Simpson scarcely retained ties to his original unit. He and Duffy camped with Indian troops and their transport mules, going out each day and half each night, bringing back wounded men.
Maitland Anzac and former Newcastle Herald journalist Frank Mattocks wrote of Simpson in the Herald on April 22, 1961:

I think the job Murphy carried out was self-imposed; it was entirely Operation Murphy. Murphy was of middle height; lightly built but sinewy. I have seen him referred to as Simpson. I believe he enlisted under that name. He told me his name was Fitzpatrick. It was not uncommon, though not very frequent, for a man to enlist under an assumed name. We had a couple in our unit. I know one of them did so because he preferred the comparative quiet of the battlefront to the running fight on the domestic front.
Murphy was liberally tattooed so it was easy to guess he was a seaman. He told me he was a stoker. We admired him immensely for many reasons and naturally grew very fond of him. His was a blythe spirit and unruffled. We marvelled at his good luck and wondered how long Dame Fortune would continue to smile upon him. The advanced aid post was a little way beyond us; Murphy occasionally had a snack with us. Suicide Gully, as we called it, was exposed to fire from three directions. Turkish marksmen looked down upon us from the elevated position and must have had the measure of any part of the gully within range.

Up the full length of it Murphy walked with the air of one out for a Sunday afternoon stroll with his girl. The rest of us when we were obliged to use it scurried like hares to pockets of comparative safety along the route. Our Colonel, a South African veteran, suggested that in the upper reach of the gully, barricades of sandbags be erected at intervals, half the width of the track. Some weeks later when there was time to do it, it was done. The protection afforded was limited. Murphy ignored it. Murphy would pick up a wounded man, one slightly worse than a walking wounded case, and take him to the dressing station on the beach, to be transferred later to the hospital ship.
He wore on his arm the red cross band of the field ambulance, and had a large red cross of some material spread over the rump of the donkey. Of all the wounded he took past us we never heard a whimper from them. Some of them were heavily bandaged; tough fellows, more than often with a cigarette between their lips. Murphy’s calm bearing and his cheery disposition must have helped his ‘passengers’ no end.

The Novocastrian commander of the 4th Field Ambulance, Dr Joseph Beeston, wrote that: “Simpson was frequently warned of the danger he ran, for he never stopped, no matter how heavy the firing. His invariable reply was ‘My troubles’. The brave chap was killed in the end”.

On the morning of May 19, 1915, Simpson and Duffy paused at the water guard on the beach for some breakfast, but none was ready. “Never mind. Get me a good dinner when I come back,” Simpson is reported to have said. Only Duffy returned.
Dr Beeston wrote that Duffy “was afterwards taken over by Johnstone, one of our men, who improvised stirrups out of the stretcher slings and conveyed many wounded in this manner”. It has also been claimed that New Zealander Dick Henderson, whose portrait is often confused with that of Simpson, kept working with Duffy. Henderson certainly did similar work to Simpson, receiving the Military Medal for his efforts.

This article appears in our book, The Hunter Region in The Great War. Now on special: