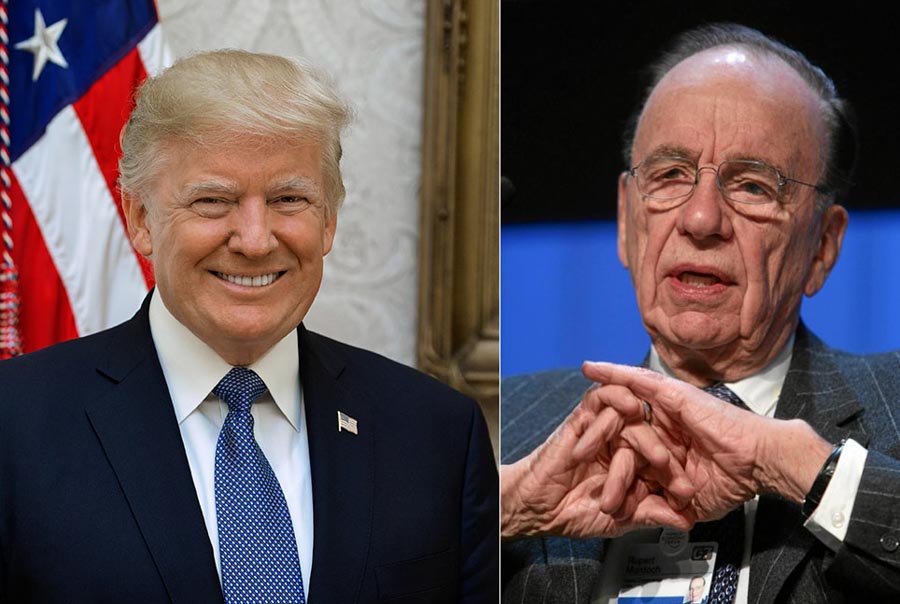 Donald Trump and Rupert Murdoch. Symptoms of our times. Photos from Wikimedia commons.

THERE are times, like this week, when it feels to me as if the wheels are falling off just about everything.

The US election looms like an iceberg ahead. In a nominally democratic system based on voluntary voting, the name of the game has become voter-suppression, with the Republicans using every dirty trick imaginable to prevent people from being able to exercise their theoretical rights. Cutting the number of polling places, urging armed goons to patrol among voters, changing rules and systems to stop postal votes being counted – the list goes on and on.

A mad, bad president versus a seemingly senile warmonger of the usual cookie-cutter style doesn’t add up to anything good, especially when the former – backed by the rabid lunatic far-right media – looks unlikely to accept the result with good grace if all the voter-suppression fails to work as planned.

And no matter who wins, the newly-stacked US Supreme Court looks set to be harnessed by religious fanatics and other right-wing nut-jobs to wind back as many progressive civic protections as they can, now that anti-abortion judge Amy Coney Barrett has been controversially installed in lifetime office.

Meanwhile the rudderless ship of state has Covid-19 aboard. The rate of infection is spiralling and the death-toll climbing as the mad, bad president rants and raves and lies and tweets to his followers that he’s got everything under control.

And in Europe, any hopes that the Covid-19 pandemic might have passed its peak are out the window with the latest figures from France, Germany and elsewhere raising terrible fears that hospital systems are about to be overwhelmed. In Paris this week already 70 per cent of intensive care beds were occupied by Covid patients, and with infection rates climbing it seems great horrors are now unavoidable.

Also in France: more trouble between Islamic extremists and everybody else. One Muslim terrorist murdered a schoolteacher who dared to champion free speech and used some controversial cartoons as examples. Harsh words were spoken on all sides. Another Muslim terrorist then murdered three people in a church in the city of Nice, prompting former Malaysian PM, Mahathir Mohamad to issue his own inflammatory remarks, thrilling the West’s right-wing media which was quick to exploit the lunacy for its own bad ends.

In Australia the same rabid lunatic far-right media that has infected the brains of millions of Americans and British people keeps tipping its propaganda sewage into the information marketplace it utterly dominates. Former prime minister Kevin Rudd has received more than 420,000 signatures on his petition calling for a Royal Commission into media ownership in Australia. Even limp lettuce-leaf former Liberal PM Malcolm Turnbull has signed, and has encouraged others to do the same.

Whose name is in the black book?

Naturally the Murdoch empire is fighting back, searching the globe for anything it can use to embarrass Rudd. A tenuous link via a donation from mysteriously dead pedophile enabler Jeffrey Epstein to a think-tank chaired by Rudd is the best the evil empire has found so far. And as Murdoch’s drivel factories go into froth-overdrive over this weak lead, they hilariously ignore the cheery happy-snaps of Overlord Rupert with members of Epstein’s shady dangerous Mossad-linked family of Maxwells (including the mysteriously dead Robert Maxwell) to be found all over the internet. Can you imagine what the drivel factories would be doing now if Rudd’s name was – for any reason – found to exist in Epstein’s now-famous “black book”, as Rupert Murdoch’s does, as a matter of extensively reported public record?

The Murdoch empire wins most of its fights by being able to scream loudest and bleed cash longest, with relentless and repetitive yelling of lies and half-truths usually being enough to steer gullible punters and gutless governments in whatever direction it wants. Its furious war against Victorian Premier Daniel Andrews has been a classic study in Murdoch methodology, for those who want an example. Andrews, acting on medical advice, enacted stern lock-down rules to keep Covid infections from spiralling. The Murdoch empire’s Australian wing, with the compliant Morrison federal government in tow, hacked at Andrews on a practically daily basis, demanding he “open up” the state, and attacking his government’s errors of policy and practice. All the while ignoring the monumental avalanche of incompetence and wilful mismanagement among the protected species on the government benches in Canberra.

But this week, the Andrews government did the equivalent of soiling its trousers by hacking down one of the Djab Wurrung trees that had stood in the way of a highway rebuild. Andrews said the route of the road had been changed to spare 16 of 22 trees identified as culturally significant, but that the project had to go ahead. The decision by Victorian Police to use Covid-19 laws to fine protestors seemed particularly cynical – even by the recent low standards of Australian policing. Another appalling example of these low and sinking standards was on display in NSW, where police used Covid laws and, allegedly, unwarranted force against people protesting against proposed changes to university funding rules.

In Queensland, large mining magnate and money-juggler Clive Palmer seems to be reprising his cameo role in the most recent federal election, somehow discovering large sums of cash to spend on saturation advertising in the state’s almost entirely Murdoch-owned media, warning of many horrors if his friends the Liberal-Nationals aren’t put in charge of the blood-bank. He has even resurrected the zombie death tax lie which worked so well in the federal scare campaigns. I must confess that, to me, the results in the deep north seems slightly academic: merely a case of which pro-Adani coalmine party will get to spend the next few years licking the Indian miner’s boots.

In the Hunter, the involvement of a federal minister in a heated debate about a quarry expansion brought the usual eye-rolls of appalled disappointment now customary with practically everything the Morrison Government touches.

The Brandy Hill rock quarry expansion will involve the destruction of a considerable amount of koala habitat, but Federal Environment Minister Sussan Ley said objective scientific studies backed the land-clearing, with the quarry company, Hanson, agreeing to plant some trees nearby sometime in the future to make a buffer zone.

To be fair, the NSW Government had already waved the application through, so complaints by Ley’s state counterpart Matt Kean about the federal decision seem a little hollow.

Sometimes it all just looks like a race to ruin, with the final glorious goal a smoking hole in the ground. Maybe next week will bring some happier news.