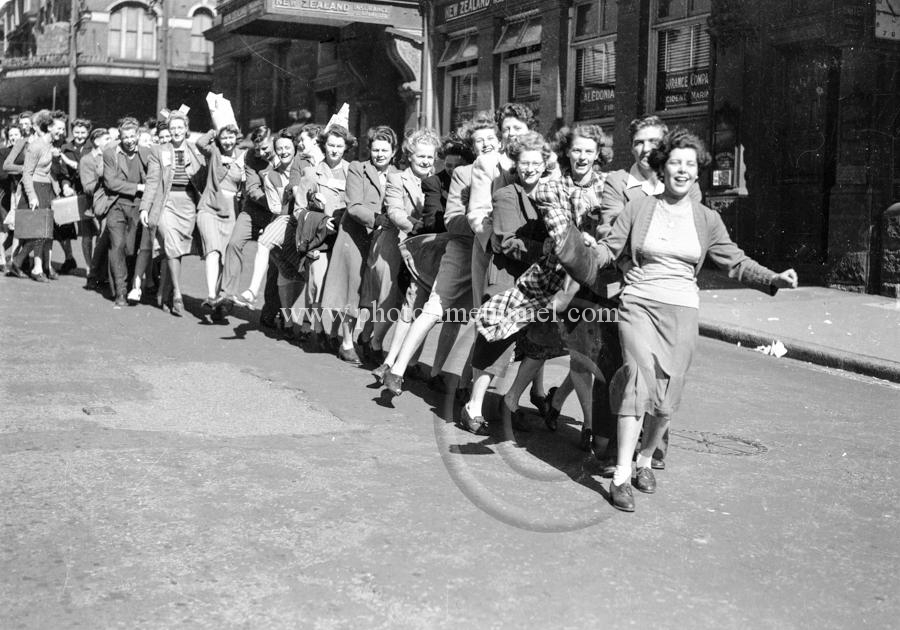 Never in Newcastle’s history has there been a day of such celebration as VP Day. August 15, 1945, was the day the long-awaited news came that Japan had surrendered and the war was finally all over. In May the news that Hitler was finished was received with pleasure, but the direct threat to Australia had been from Japan and it wasn’t until the atomic bomb was dropped and Japan capitulated that the pent-up emotion was able to be released.
The darkest days of the war, for most Novocastrians, had been three years earlier when a Japanese submarine fired shells at the city. By 1945 it was clear the tide had turned and the Allies would win. It was only a matter of when. So when Prime Minister Ben Chifley broadcast the momentous news on August 15, the city erupted in a joyous and uninhibited celebration.What the news meant, to many families, was that their loved ones serving in uniform or held prisoner in far-flung corners of the globe might soon be home at last.

A wild dissonant chorus that lasted – on and off – all day

As soon as the news broke over the radio, hundreds of sirens, whistles and horns on ships and trains and in factories were unleashed, starting a wild dissonant chorus that lasted – on and off – all day. In the city people poured into the streets, dancing and celebrating with wild spontaneity. In the suburbs thousands made a beeline for any transport that could bring them to the city’s heart, to be part of the joy and to await the afternoon’s formal parades and speeches.

Watch a rare film of the celebrations

A rare short film – in colour – of celebrations in Newcastle at the war’s end was generously given to us this year by Mrs Vera Findlay, of Greta. The identity of the 16mm film’s creator is unknown, but it must have been somebody of influence and/or wealth, since access to colour film and also the ability and time to use it in 1945 would have been very limited. We have had the film professionally digitised, and have donated the original to The University of Newcastle’s Cultural Collections for safe keeping into the future. Follow the link to UoNCC’s YouTube channel.

You can watch our compressed version of the film here. If you read the following post before and after you view the film, you will certainly recognise a number of aspects of this remarkable recording.

To quote The Newcastle Morning Herald at the time: “It was amazing how Hunter Street filled almost before the sirens of the works and the steamers in the harbour and the shrieking of train whistles had indicated the arrival of peace. No less surprising was the avalanche of bunting which adorned every car and lorry and the flags carried by the pedestrians. Everyone had one or more and the number of streamers and whistles must have run into untold thousands.
“It was almost impossible to hear the Prime Minister’s announcement in Hunter Street because of the noise, but nobody cared. They knew Mr Chifley was speaking, they knew what he was talking about and that was enough. At the conclusion of his speech, a radio station put on dance music, and almost in a flash Hunter Street between Bolton and Newcomen Streets became an al fresco palais de dance.

“Mostly men in AIF uniform with a few American naval men provided the male partners, to be joined later by the men from the industries who had suddenly knocked off work and come to town, many of them with their lunch tins slung across their shoulders. Office workers rushed into the streets or climbed to high windows and flat roofs to shower confetti and paper on passersby. Work was finished for the day. The people took possession of the streets.

The people took possession of the streets

“Buses and trams were soon diverted to Scott Street and the thoroughfare was given over to the revellers. Promptly at 1.50 a naval contingent led the procession from the starting point between Perkins and King Streets into Hunter Street. In glorious sunshine the procession presented a brilliant pageant and the unending cheers of the crowd from Perkins Street to King Edward Park were a fitting accompaniment to a magnificent display.

“From 12.30 to nearly 2.30 it was impossible to board trams running into the city. Trams travelling from Broadmeadow, Adamstown, Lambton and Wallsend were carrying up to 150 people per car.”
Tram after tram travelling to the city through Hamilton was packed inside and out. Footboard riders clung precariously to their positions.

“Women in festive attire and wearing coloured paper hats hung on with one hand and waved to passersby with the other. Some blew paper trumpets and beat tins against the sides of trams. The buses were crowded on both decks and passengers who could not get inside overflowed to the rear platforms until the buses appeared to be weighted down at the back.”
Police estimated that 100,000 people packed into Hunter Street between 2pm and 3.30 and 50,000 jammed shoulder-to-shoulder into King Edward Park for a thanksgiving service.

To quote the Herald again: “Up in King Edward Park groups sat about on the grass below the road which was lined with cars. Soon after midday a steady stream of people began to make for the park and by 2 o’clock it was filled. Looking from the seaward ridge you saw one bowl within a larger, sunlight glancing from scattered foliage and lighting the coloured dresses. The green rims of the bowls became pink with sunlit humanity.”

The city’s Anglican leader, Bishop Batty, told the biggest crowd King Edward Park has ever seen that though he could not associate himself with those who held that the use of the atomic bomb was morally indefensible, it was a pitiful commentary on the pass to which human affairs had come. Millions were at risk of starvation in Europe in the coming winter, he said. It was meagre compensation for this appalling state of affairs to know that science had discovered, at a cost of £600,000,000, a method of destroying whole cities and all their inhabitants with a single blast.
“The discoveries of science are marvellous in themselves, but they are morally neutral. Whether they make for the weal or woes of humanity depends upon the moral outlook of the men who use them. The old 19th century expectation that science and education would guarantee a future of inevitable and increasing progress for the human race has been startlingly falsified.
“The imperative need of the times is for moral progress corresponding with the intellectual,” the Bishop said, his sombre words making a contrast with the still extraordinarily loud sounds of sirens and celebration coming from Hunter Street and the harbour.
A Herald writer summed up the conflicted emotions of the day: “On the corner of Bolton Street someone was saying: ‘They’ll have to pull their socks up after the war’. But this was ‘after the war’. This was the beginning of the ‘postwar period’ we’d read and planned so much about. Maybe there will be a depression and another war. Maybe we will be wiped out by atomic bombs. But what the hell! This one is over.”

Excerpt from the book, Newcastle, the Missing Years, by Greg and Sylvia Ray:

The Coffee Pot, at Toronto and Merewether