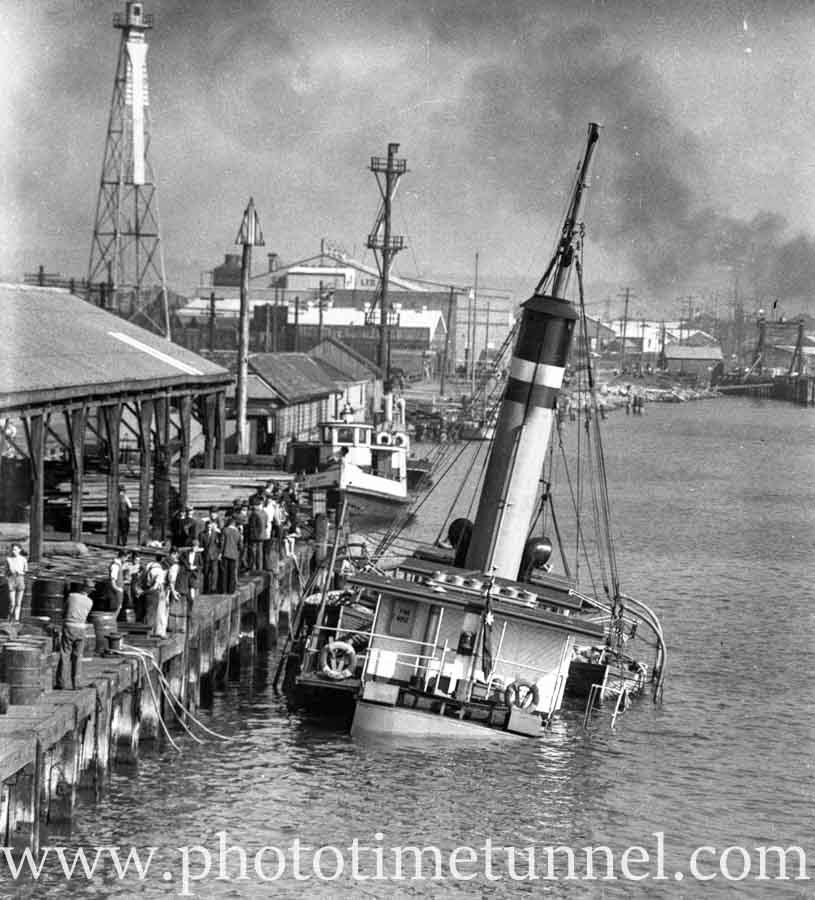 Boambee was an unlucky vessel. The 236-tonne wooden steamer was built in 1908 on the Bellinger River by E.D. Pike and Co for the Manning River Limestone and Steam Ship Company to replace its wrecked ship Kincumber. By the time it ran aground and was dismantled 40 years later (under the name Illalong) it had sunk three times, including once at the wharf in Newcastle.

Newspaper records show the Boambee had a very eventful career, full of mishaps and incidents on its coastal runs. One major mishap was at Tweed Heads on December 20, 1923. The Boambee was driven ashore in a strong gale but was refloated and towed to Sydney for repairs.

In January 1934, while the Boambee was tied up in Newcastle, one of its masts suddenly collapsed and narrowly missed well-known bait-merchant and waterfront identity, Hartley Spurr.

Next, it sank at Clarence Town wharf on the Williams River on April 21, 1934 while loaded with gravel and wooden sleepers. Four sleeping crew members had a lucky escape, managing to fight their way out of the fast-filling ship as it sank to the bed of the river. They were awoken by the sound of machinery falling as the ship developed a severe list at about 3.45am.

Again the Boambee was refloated but again it sank, at Hexham wharf on the Hunter River during the war years. Next it was hit by a ship in Newcastle Harbour and written off.

In May 1947 Boambee was rebuilt and bought by the Hunter River Steamship Company for the Sydney to Newcastle trade. On its first voyage for the company, taking a cargo of timber to Sydney, Boambee sprang a leak. By the time the ship reached Redhead the leak was too fast for the pumps so its skipper, Captain Polglaze, attempted to return to Newcastle. Sinking slowly as it went, the Boambee struggled back to port. Water flooded the stokehold before she made the port and threatened to cause a steam explosion. Crew members stood in thigh-deep water and desperately shovelled wet coal into the boiler.

By the time it entered harbour Boambee was very low in the water but no tugs were available to help. Boambee reached the wharf, began to list and sank at its berth within 10 minutes. The crew just had time to shut off the boiler and escape, but they lost all their belongings. The sinking was blamed on new planks failing to “take up” after the recent repair job.

After five days of hard work by divers and salvage pumps it was finally refloated, repaired and later renamed.

Now called Illalong, the ship’s final disaster came on March 10, 1948 when, en route from Sydney to Newcastle with a cargo of brattice cloth for coalmines, it went too close inshore in thick fog and ran aground on Nine Mile Beach, near Belmont. The captain and nine crew climbed ashore and had breakfast on the beach before walking to John Darling Colliery to report their accident.
The ship was written off again, sold as a wreck and dismantled on the spot.

The story of Boambee appears in our book, Newcastle, The Missing Years.

Another interesting article about the Boambee can be found at the Newcastle on Hunter website.