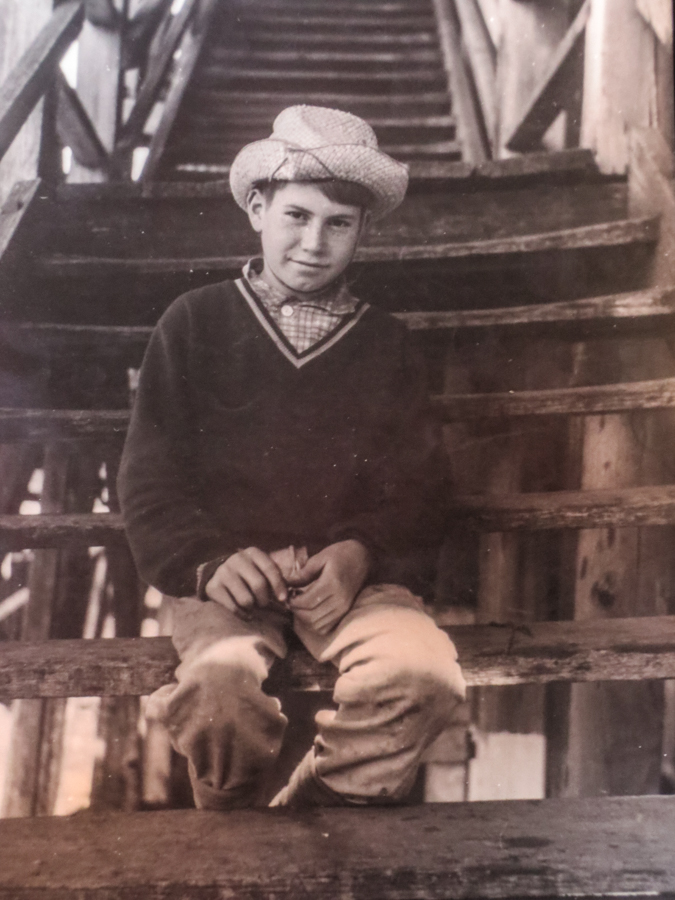 Young Brian Andrews, photographed by rail and mine enthusiast, the late Jim Webber.

Brian Robert Andrews was born in the midst of coal and steam near his father’s workplace at West Wallsend Extended Colliery at Killingworth in 1948. His father was in charge of maintaining Caledonian Collieries’ fleet of coal wagons, and the family of eight lived in a company-owned house.

At 17 months Brian contracted polio. He went to bed one night fit and strong and woke next morning unable to stay upright. The doctor was called and passed sentence: the infant had polio and nothing could be done. That was the beginning of a lifetime of trials for a bright, intelligent and sensitive boy.

He spent six months in isolation at Western Suburbs Hospital in Waratah before returning home with the permanent legacy of a withered right leg and a marked limp. Walking was an ordeal for Brian, and his parents often carried him until he grew too heavy. But though his handicap was obvious, he recalls not really understanding its implications until one day when he chanced to see a reflection in a window of himself walking. He had never watched himself walking in any kind of mirror before, and the shock was severe. “It hit me hard that I didn’t walk the same as other children. I then realised why I didn’t play sport at school,” he said.

In high school some children teased him and called him names. Some teachers made insensitive remarks, including one who told the whole class that if “Brian had been born at the time of the Roman Empire they would have taken him outside and belted his head in with a rock as he would have been no use to them”. Thoughtless comments like that one stayed with him all his life, though he soon developed a thick enough hide to deal with them.

Because of his reduced mobility and his inability to play sports, Brian spent much of his free time around the mine where his father worked. He was soon a favourite of the miners, who took him underground and taught him everything about their jobs. He learnt all about his father’s job in the wagon workshops and often travelled on the colliery rail lines, visiting other mines and sites and being taught by the loco-men how to drive some of the steam engines.

Always striving to be independent, Brian even managed to ride a bicycle. “My right foot would not stay on the pedal and my left leg was not strong enough to keep the bike moving so I had to propel the bike with my left foot on the ground,” he said. “I was able to give the bike several pushes with my left leg and then coast for a short distance, the movement being repeated until I got to school.”

Fascinated by the coalmines he visited, Brian even built his own “pit-top” in his yard, painstakingly dragging all the materials home from mine dumps on his billy cart. “The structure was approximately 20 feet long, 10 feet wide and about six feet off the ground. I cut poles in the bush and brought the timbers home from the colliery. The main deck supports were old wagon boards. I dug the holes for the posts as well as drilling all holes by brace and bit for bolting the structure together.” He built two skips, a flat-top and a box-skip, and a hoist with a pulley to lift buckets of coal. It was a tremendous single-handed undertaking for an 11-year-old, and indicative of the persistence he now applies to his authoritative books on the Hunter Region’s mines and railways.

The youngster collected wagon tickets and miners’ lamps and nurtured a dream to become a miner and work underground. Unfortunately, his handicap prevented him from passing the medical, although there seems little doubt he would have been an asset to any employer willing to take him on. He had to content himself in 1966 with a drafting job at the Hunter District Water Board until a chance arose in 1969 to do the same type of work for Coal and Allied Industries at Hexham. This led to many opportunities to be close to the mines he loved and even to get back underground.

Having received his first camera in 1959, Brian became an enthusiastic photographer and took many pictures underground at the request of his employer. He also did much drafting and other work for other industry clients over a long period.

For some years Brian and his friend Phillip Lockett were busy in their spare time taking thousands of photos of the steam locomotives whose era was coming to an end at the mine sites that were soon to close. The fruits of their labours are on display in Brian’s books, and also being uploaded to the website of the University of Newcastle’s Cultural Collections. Brian also has an extensive film library of coal and steam-related material.