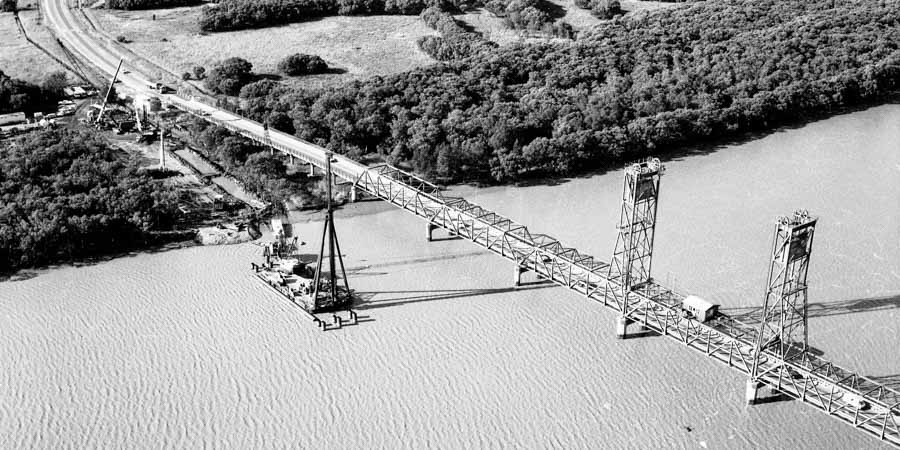 Long before anybody considered building a bridge across the Hunter River at Hexham, people crossed by punt. A convenient crossroads and staging point between Newcastle, Maitland and Port Stephens – and between Sydney and Brisbane – Hexham was settled by Europeans in the 1820s. It soon had a railway station, a handful of industries and facilities for loading coal aboard small ships.

According to the December 1946 issue of the NSW Department of Main Roads’ journal (aptly named Main Roads), the highway between Sydney and Brisbane in 1925 had 12 ferry crossings. Between 1925 and 1946 seven of these (including the enormously challenging Hawkesbury River crossing) had been bridged.

The busiest remaining vehicular ferry at that time was on the Hunter River at Hexham. Just before the outbreak of World War 2, the crossing was handling an average of 1170 vehicles a day. The punt at Hexham was able to carry 28 vehicles and was powered by a two-cylinder steam engine. After representations by Newcastle Chamber of Commerce, the Main Roads Department agreed to build a bridge at Hexham. The plans were ready in 1940, but the war interrupted the process. The chamber tried to persuade the government in 1941 that the bridge would help the war effort, but received a polite but non-committal answer.

By 1945 the time was right, and the Government called tenders for an 260m bridge with six 36.5m truss spans, with the centre span able to lift to allow ships to pass. (Another three spans – one at the southern end and two at the northern – were to be carried on rolled steel joists.) The £35,000 tender for supply of steelwork was won by Carrington firm Thos. C. Pollard and the £71,000 job to erect the bridge went to Adelaide J. King and Son. A postwar shortage of steel delayed and slowed the job.

The bridge was built about 700m upstream from the existing ferry. It was noted that two companies shipped coal from the river in the vicinity, and the bridge would be between the two loaders. While ship movements were limited, the rules required any bridge to provide 30m clearance both vertically and horizontally.

According to Main Roads:

The substructure of the bridge, carrying the steelwork and deck, will consist of concrete piers founded on reinforced concrete piles. Under each of the piers carrying the lift-span there will be 48 piles, 35ft 6ins [10.8m] long. Under three other piers, each carrying the ends of two truss spans, there will be 27 piles of the same length . . . A coffer dam of steel sheet piling is to be constructed at the site of each pier and the piles will be driven inside the coffer dam after the silt and sand have been dredged out. The tops of the piles will then be held in a thick concrete ‘raft’ placed in the bottom of the excavation, under water, and the reinforced concrete piers will be built upon this foundation.

By the time of the June 1950 issue of Main Roads, the project’s scope had become clearer:

The bridge is to comprise three approach spans at the Newcastle end and ten approach spans at the Raymond Terrace end. The main bridge consists of five 121ft [36.8m] truss spans and one 124.5ft [38m] lift span. The total length of bridge is 1254ft [382.2m]. It will have a 22ft-wide [6.7m] carriageway and a 7ft-wide [2.1m] footway on the downstream side. Progress made includes all steelwork for the truss and lift spans together with three of the approach spans. One truss span is in position. Machinery for the lift span is being manufactured. Four piers have been completed and work on several others is proceeding.

Contractors on the job ran into problems with losses caused by floods and staff illness, and the Main Roads Department took over the project in October 1950. Ultimately, much of the steelwork was fabricated at Newcastle State Dockyard.

One of the workers on the bridge was Jim Lightfoot, who worked on the job from start to finish. Jim took many photographs of the job as it progressed, leaving a remarkable pictorial legacy. His daughter, Lynn Warren, said the bridge was part of her life for seven years and she still calls it “Dad’s bridge”. Lynn said her mother always used to worry on the days when Jim was to enter to the underwater airlocks on the job site, remaining anxious until he returned home safe at the end of the day.

Timber pile framework was constructed around the area to be occupied by the pier . . . Steel sheet piling, carefully positioned against guides attached to this framework, was then driven about 8ft [2.4m] into the bed of the river. After the guides had been removed, individual sheet piles in selected positions were first driven to their final depth and steel walings bolted to them by a diver. The remaining sheet piling was then driven to the correct depth and secured to the steel walings.

The river bed was excavated by a grab to a level a little below the designed depth of the seal and the concrete piles were driven . . . a concrete seal was poured under water using special buckets to carry the concrete, leaving the tops of the piles projecting through the concrete. The service of a diver was used to ensure accurate placement of the seal. A pneumatic seal was sunk into position over the coffer dam and secured to the timber framework. An airlock and necessary fluming was then attached. All framework, reinforcement, equipment etc which could not pass through the air-lock was then brought into the coffer dam and fixed in accessible positions by a diver, some being attached to hooks on the underside of the pneumatic seal.

Water was pumped from the inside of the coffer dam and, working under air pressure, the heads of the concrete piers were stripped and the reinforced concrete footing and base of pier columns was then built to the top of the working chamber. The airlock was then removed and the pier columns built up to above water level, using watertight steel forms clamped to the column bases.

The steel trusses were erected one at a time on a staging built adjacent to the river bank. From here they were transferred to two pontoons at high tide and floated into position over their bearings. The floating plant was controlled by winches. The trusses were seated on their bearings by the falling tide.

By the 1970s the bridge was becoming inadequate for the increasing traffic flows and a new reinforced concrete high-level bridge was built for northbound traffic, just upstream of the old bridge. The new bridge was opened in August 1987.