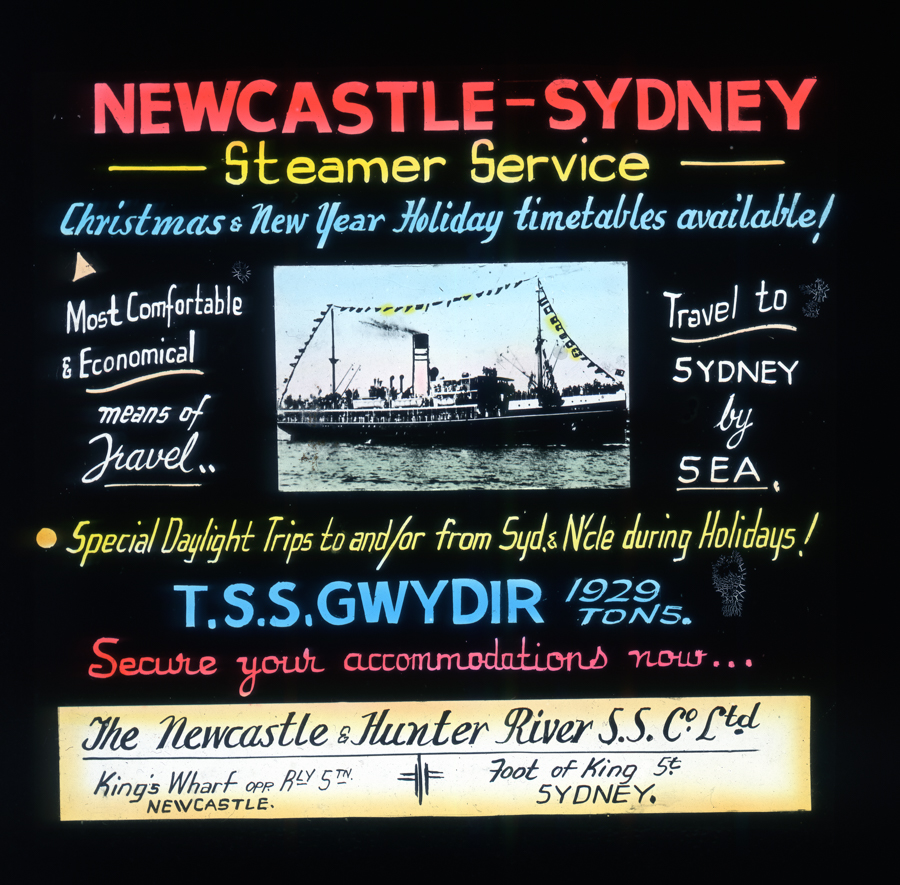 Before the railway crossed the Hawkesbury River, the sea route was an obvious choice for intercity travellers, and the steamer wharf in Newcastle Harbour had a busy passenger terminal. A 1930s brochure invites passengers to “take the cheaper and more comfortable route to Newcastle or Sydney, ensuring a complete night’s rest in passenger accommodation comparing favourably with that of steamers employed in deep sea trades”.
The brochure promised “up-to-date bath and lavatory accommodation” and “refreshments and moderate rates”. Steamers left both cities at 11.30 each night, except Sundays. Passengers could buy single or return tickets as well as monthly, quarterly, half-yearly and yearly passes.
The railway steadily killed the overnight steamer service and, though it limped on into the 1940s, it was fighting a losing battle against progress.

It’s hard to find anybody alive today who actually travelled on the big pre-war passenger steamers Gwydir and Hunter. The Gwydir was lost after a collision at sea in February 1942.

Travellers in steerage (third class) overnight from Newcastle to Sydney in the 1930s were given a straw mattress when the ship left Newcastle and a mug of hot tea on deck when they arrived at Sydney in the morning and the steamer slid up the harbour towards the new Sydney Harbour Bridge.
Jim Laing, of Charlestown, recalled going aboard the Gwydir in 1938, shortly after his family moved to Newcastle, and steaming south for an afternoon excursion past Swansea Heads.

“I remember asking my mother if I should take my jumper,” Jim said. “She told me I wouldn’t need it, but by mid-afternoon I wished I’d taken it along.”
Jim’s nicest memory of that trip was watching dolphins leaping in the ship’s bow-wave as it came back past Nobbys in the late afternoon.
Retired optometrist John Miner attended lectures in Sydney in 1946 and used to take the steamer home again in time for work next day.
“The lectures didn’t finish until late in the evening, and the ship, the Kindur, used to leave a wharf at Kent Street, loaded with beer for Newcastle,” Mr Miner said. The Kindur, a 1267-ton steamer, was mainly used to carry freight, but it had a handful of cabins for paying passengers too, and Mr Miner travelled aboard about once a week for 10 months.
“It cost 10 shillings and sixpence for a cabin and it used to leave Sydney whenever the beer was loaded, which might have been anywhere between 10 and 11pm,” he said. “I’d go to sleep and wake up as the ship was coming into Newcastle about 7 or 7.30 in the morning.”
It was always a bumpy ride, accompanied occasionally by seasickness, but the entry into Newcastle was always an impressive experience.
“The harbour in those days was always a bustle, with many ships, mostly steamers, on all sorts of business. The steamship company had its own wharf almost opposite the railway station, and when we berthed the vans would be waiting for the beer.
“Sometimes it was so busy we’d have to double-berth and walk across another ship to reach the wharf. Other times the ship would go straight to Carrington to take on bunker coal, and we’d have to wait to disembark.”
Mr Miner recalled his first voyage when the skipper, who’d seen a lot of service during the war, invited the Novocastrian teenager onto the bridge and regaled him with hair-raising tales of sinkings and wartime exploits.
“He told me there were still plenty of loose mines bobbing around in the sea and that, now and then, a ship would strike one and go down.
“I went off to bed and was almost asleep when I heard an almighty roar. I ran to the deck, but all was quiet. It happened again, and was very disturbing to me after all those stories. I found out that just behind my bunk was a cavity in which coal was stored. When they needed coal below they opened the chute and coal rushing down the cavity made the noise.”

Featured in our book, Travelling Through Time