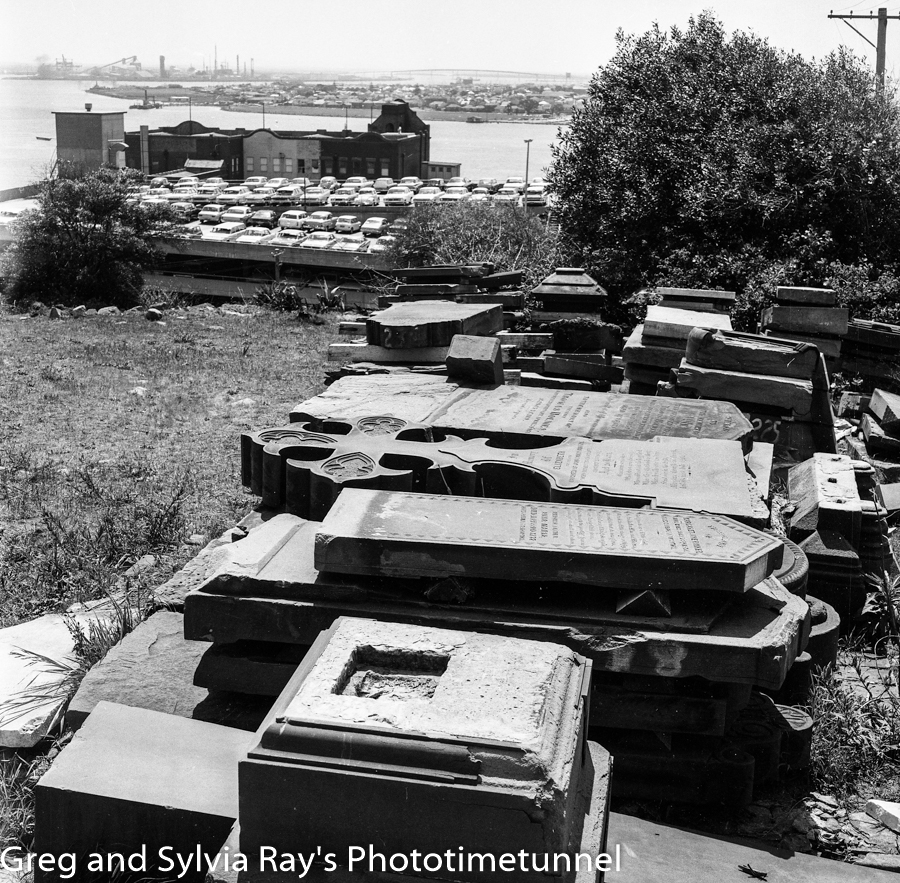 The story of the migrating gravestones first caught my attention more than a decade ago when genealogist Dave Hughes showed me some photos of pieces of headstones used as landscaping blocks in Newcastle’s Blackbutt Reserve. He told me the stones had been moved by Newcastle City Council from the old cemetery at Christ Church Cathedral in the early 1970s as part of a “clean-up”.

I didn’t believe him at first, but soon discovered it was true. I contacted the former Blackbutt caretaker Ray Raisbeck who told me he had actually been a leading hand with the council when the cemetery was transferred to council control. The council decided to clear the graveyard.

“We had to use a chainsaw and tractor to get some of the bushes out of the iron fences around some of the graves,” Mr Raisbeck said. When he turned over tumbled tombstones, he saw many graves whose occupants had been born before Europeans settled Australia.

According to Newcastle heritage activist Doug Lithgow, the story began with the Christ Church Cathedral Cemetery Act of 1966, which followed on the heels of the plan to build a council parking station in King Street. “The most senior planners were against that idea because that area was supposed to be a park as part of the focus of the city marketplace,” Doug said. “But the city council worked out a plan to take the cathedral cemetery as a park instead, to compensate, so the parking station could go ahead. Incidentally two beautiful big old candlewood trees were destroyed too. It was outrageous, really. And part of the package involved the Newcastle Club getting a new carpark that took out part of the old cemetery,” he said.

The council catalogued and photographed many of the stones in the 1970s (as it was obliged to by the conditions of the Christ Church Cathedral, Newcastle, Cemetery Act 1966) before shifting a handful to the cathedral park’s eastern end. Many were placed face-up, making them easy to read but also speeding their erosion. Mr Raisbeck, who by then had moved to Blackbutt, said he received many stones from the cathedral which he used for landscaping.

“Some stones were offered to anybody who wanted them and I remember a lovely red granite one, belonging to a Clunes Innes, that was taken to Port Macquarie,” he said.

Archibald Clunes Innes (after whom Glen Innes is named) fought in the Peninsular War, reaching the rank of Major. He became Police Magistrate at Port Macquarie, where he built a grand mansion and modestly named it ‘Lake Innes Cottage’. At one time one of the wealthiest men in the colony, he lost everything in the great depression of the late 1840s and was declared bankrupt in 1852. He found employment as Police Magistrate in Newcastle, where he died in 1857 and was buried in the Cathedral churchyard. The reason for the removal of his headstone was to place it in the Port Macquarie Historical Cemetery next to that of his wife (daughter of the former Colonial Secretary Alexander McLeay). I have had the fascinating experience of inspecting it there. From reader Ken Dutton

“We were making the stonework around the Blackbutt toilets one day when one of the workers placed a stone so you could see a carved pair of crossed hands holding a rose. I told them they’d better turn it around”, Mr Raisbeck said.

Mr Raisbeck wrote a paper on the topic of the stones used at Blackbutt, noting that they had come from many places other than the cathedral cemetery.

They included bush rocks collected from roadsides at Seaham in 1967 and used at the reserve entrance. Some of these are very big, but all were loaded on the council trucks by hand. The stone gutter down the steep entrance road came from guttering originally used on the overpass near Waratah Station. At the time Mr Raisbeck was told that these pieces of trachyte had been hand-cut by South Coast prisoners. These pieces were extremely hard and heavy and had to be moved by a tractor with a hydraulic crane.

Stonework from the first section of the old aviary site largely came from a stone house at The Junction which was being demolished in about 1969 to make way for a bakery. Walls continuing to the small dam were mostly made of old kerb and guttering except for a section just above the dam which was old sailing ship ballast, possibly black lava from Hawaii. “They were originally used in the dry stone walls of the King street Rockeries,” he wrote. Mr Raisbeck had also been the gardener in charge of the rockeries between 1954 and 1957. He helped load these rocks when King Street was widened in about 1967-69.

Blackbutt’s rainforest walls mainly came from the old Wallsend Methodist Church, which was demolished when it appeared in danger of collapse.

Stones around Blackbutt’s dams were mainly kerb and gutter stones which were also used near the ranger’s cottage. Some large boulders beneath the cliff in the rainforest area came from the council’s Merewether quarry.

There used to be a couple of dumps of recycled stones at Newcastle’s No.2 Sportsground, and many of these also found their way to Blackbutt. Waratah kerb and gutter stones were transformed by Mr Raisbeck into various barbecues around the reserve and were also used to build the pillars at the Lookout Road entrance and the wall of worked stone that once displayed a guide map to Blackbutt.

“This work was done by the council’s stonemason Gordon Myers, who also repaired the King Street retaining walls at the Cathedral cemetery site,” Mr Raisbeck wrote.

Headstones from other cemeteries may also have made their way to Blackbutt, including, possibly, some from Mayfield’s St Andrew’s Church of England. That cemetery was cleared to make way for a church hall.

Mr Col Boundy, of Alderley, Queensland, has described his 1992 search for the gravesites of his great grandparents, John and Alice Boundy. John Boundy and his second wife Dorothy were buried at Sandgate cemetery, but no trace of Alice could be found. Her death certificate indicated she was buried at St Andrew’s, Mayfield, but as Mr Boundy discovered, the old graveyard had been cleared as the result of a special Act of Parliament in 1957 to allow the new hall to be built. According to the history of the church, written by Noel and Sue Skimmings, the headstones were taken to Blackbutt Reserve.

Dave Hughes, who has made a close study of a number of Newcastle cemeteries, said some of the Christ Church headstones photographed in near-complete condition in the 1960s were now in pieces in Blackbutt Reserve.

“The tombstone of Samuel Osborne is one I can name immediately,” he said.

Mr Eddie Page wrote that the Osborne gravestone had been earmarked in 1966 for preservation and restoration, but had instead ended up at Blackbutt. He believed as many as 30 others similarly earmarked at the time had suffered the same fate. “I would particularly love to find any remnants of the headstone of Henry Chatfield – Captain of the Cawarra. Even though it had quite some historic significance and was in fair condition, the Chatfield headstone wasn’t listed as worth retaining,” Mr Page wrote.

I visited the Cathedral Park on July 9, 2020, to view some changes the council has made in relatively recent times. On contacting the council I was advised that the first stage of funding for the redevelopment of the park had all been spent. More funds were expected to become available to continue the work in the 2021-2022 financial year.

Part of the work involved replacing some headstones as close as possible to their original positions. About 20 had been returned so far, and about 40 remained at the council’s works depot awaiting conservation work and replacement in location. A number of the stones currently near the boundary with the Newcastle Club would also ultimately be returned to their original positions.

Other proposed work involves the creation of monuments to commemorate the mass grave of the victims of the 1866 Cawarra shipwreck disaster and Mulimbah House, which once stood in a corner of the park. This memorial would be specially designed to interpret the indigenous history of the area. A monument to infants, buried in times of high infant mortality, would also be created, and a general monument would be built on the King Street boundary of the park.