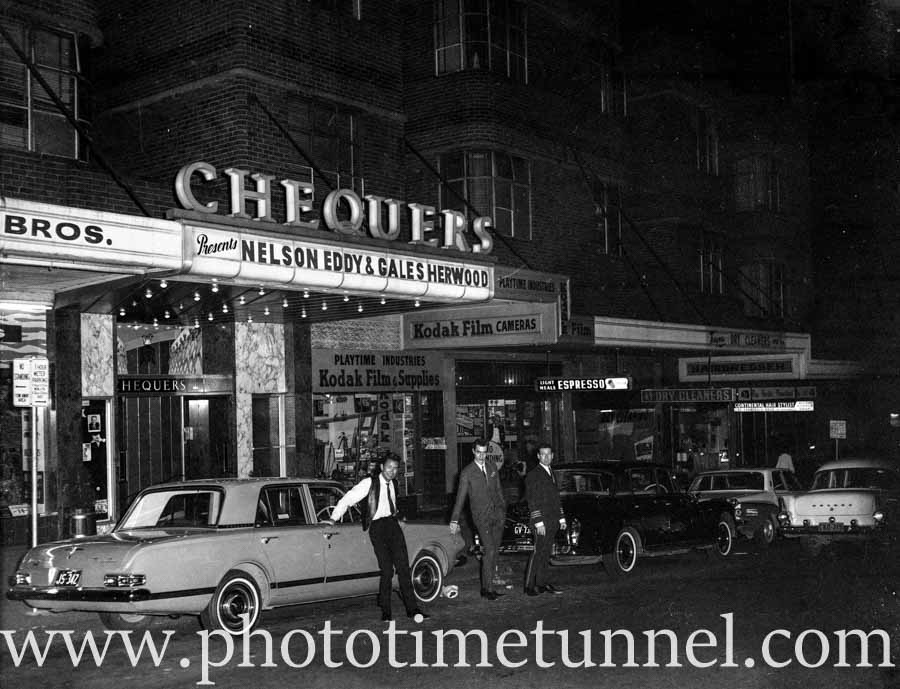 A few years ago, while rummaging in a Newcastle antique shop, I found a box of negatives that seemed to contain interesting images. I bought them, took them home and scanned them. I was surprised and interested to discover that they were mostly photographs of Sydney’s famous Chequers nightclub, taken by an unknown photographer in the 1960s.

I read a little about Chequers and found that it was owned by Keith and Denis Wong, members of a well-known Sydney family active in the entertainment scene over a number of years. The Wongs also are reported to have had interests in the Mandarin Club and the Whisky-Au-Go-Go, not to mention many other irons in the fire in Chinatown and elsewhere.

Chequers was reputed to be Sydney’s best nightclub for a period in the 1960s, and many rated it among the world’s best cabaret venues. Perhaps not surprisingly, underworld figures were often said to frequent the club

With a staff of 120 and capable of seating more than 500 patrons, the club was famous for paying high prices to attract top-class acts. Among those illustrated in the negatives I found were Shirley Bassey, Sarah Vaughan and Gale Sherwood.

In an article in the Sydney Daily Mirror newspaper on September 15, 1965, journalist Ron Saw wrote that Chequers was the only club in Sydney to operate at a loss. It was also “the grandest club in Sydney”, Saw wrote.

“Chequers opened in Pitt Street in 1951 and moved to Goulburn Street eight years later. As a nightclub, rather than a restaurant or the annexe of a hotel, it is by far the best in Sydney.” Saw quoted Morris Lansburgh, the Miami and Las Vegas hotel millionaire, saying that Chequers was “better than either the Copacabana or the Latin Quarter in New York”. “Murray Hertz, travel editor for a Las Vegas newspaper and an acknowledged authority on international fleshpots, rates it the sixth best in the world”.

The main reason Chequers lost money, Saw wrote, was that it paid top fees to visiting artists. Other clubs in Sydney at the time would usually pay no more than £600 a week, but Chequers paid £7500 a week to Sarah Vaughan, £6000 to Tony Martin and Shelley Berman and £5000 to Frances Faye.

Saw wrote that owners Dennis and Keith Wong made profits from their “import and export, real estate, restaurants and showbusiness (Pan Pacific Promotions) that would more than cover their losses at Chequers”. He quoted Dennis Wong saying that: “We lose money, but we feel sure we’re going to make money in the long run. All the other big nightclubs have gone and we’re still here. The longer we stay in business and the bigger we stay in business the better our name gets. The world gets smaller and more people come to Australia – and more and more come to Chequers. We don’t expect to do everything at once. We’ll wait.”

Saw wrote that “a pleasant, if not dissipated evening” would cost about £5 a head at Chequers, which was considerably more expensive than its competitors.

While I don’t know who took the photos there are one or two clues. This photo was in an envelope with a label that suggested the photographer was in the frame, apparently the man on the right. I’d be glad to learn his name and any details of his life and career.

A cavalcade of interesting cabaret performers, known and unknown . . . click for a closer view.

In the 1940s Billy Eckstine was a great singer and innovative band leader. His career was on the up-and-up until 1950 when a famous photograph in Life magazine – showing a white female fan laughing with her head on Billy’s chest – caused a racial backlash. In Sydney 15 years later the same problems didn’t arise. Photo dated January 1965.

American cabaret singer and pianist Frances Faye was credited as a major influence on Australian performer Peter Allen. She was known for her dusky risque style.

One of Australia’s top comedians of his era, Terry Scanlon started performing at the age of nine, learning his craft the hard way through the Great Depression before becoming a regular at the Tivoli in Melbourne. He travelled the world, gaining accolades in the UK and the USA, and in the late 1960s he even had his own television show in Australia.

Multi-talented American performer Earl Grant had some huge hits in his career, including the million-selling Ebb Tide. He was killed in a car crash in New Mexico at the age of 39.

Egyptian-born Gali Gali was a US citizen famous for his magic acts. His name meant “Quickly, Quickly” in Turkish.

Australian magician Ken Littlewood and his Japanese wife and assistant Toshi were very well-known and popular both in Australia and overseas.

I’d be very glad to hear from anybody with more information about Chequers and the people who performed there. The collection contains hundreds of photographs, most not labelled.

Maud Butler, the Kurri girl who wanted to be a soldier, and her bad soldier brother