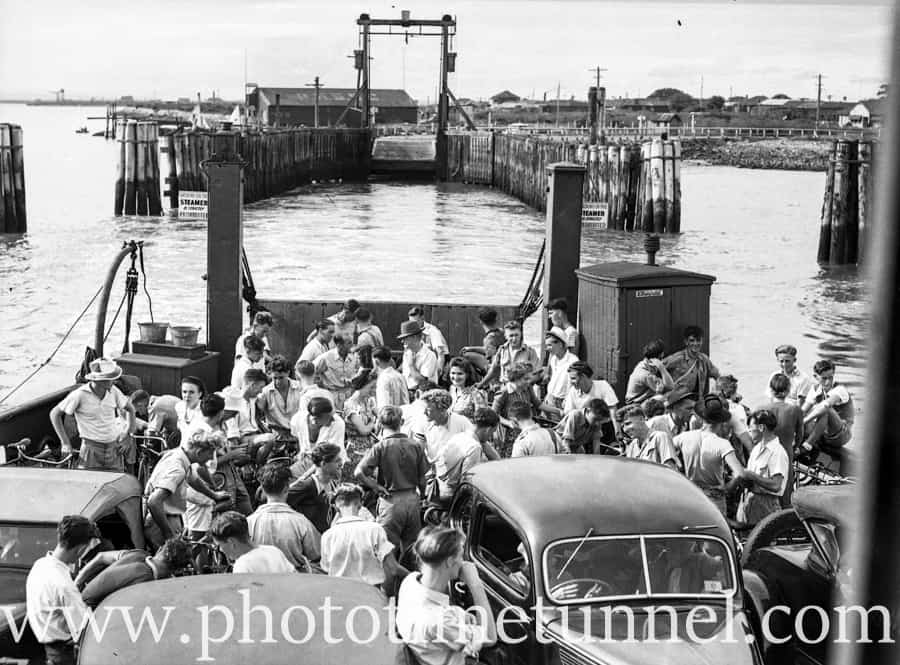 No, the punt is not going to Stockton.

One problem with publishing books is that your errors stay around a long time. You can make a mistake on radio and with luck it’s gone and forgotten in a day or two. Even a newspaper isn’t so bad: an error will plague you for a week or so and then – unless you are being sued over it – the pain goes away.

Books are different. They have a long shelf-life (boom boom!) and so when you make mistakes in books they hang around for ages. And publishing corrections is pretty difficult. You can fix it in the reprint, if you do a reprint.

I found out all about this pretty quickly in my book publishing career. Our first book, Newcastle, the Missing Years, contained a few points of contention, but by far the most embarrassing error was the caption on the photo of the punt on Newcastle Harbour.

The punt was carrying a lot of cyclists, and I wrote in the caption that they were going to Stockton. No sooner had the book hit the shops than the comments started flooding in. How could I have been so silly? Couldn’t I see just by looking that the punt was LEAVING Stockton? Well yes, once it was pointed out it was very obvious. That was corrected in later printings.

There were other mistakes. A photo that I thought was taken in Newcastle was really shot in Broken Hill. (Replaced in later editions with a truly local photo.)

In the first printing of our second book, Recovered Memories, I fluffed a key date in a piece about the 1955 floods, even though I knew the story inside out. Naturally I fixed that in later printings.

Here’s another whopper, from our book The Way We Worked;

For some reason I was sure this bloke carefully keeping his eyes lifted at the Osti swimwear factory at Kurri Kurri in the 1960s was NSW Governor Sir Roden Cutler. I was quickly advised (after the book was on sale) that I had the wrong knight. It was actually Sir John Fuller, a Country Party MLC whose interesting obituary you can read by clicking the following link:

In our latest book, Travelling Through Time, I know of a few mistakes, unfortunately. I seem to have a bit of problem with ships, in particular. They are easy to get wrong, it seems. For example, I’ve got the wrong Iron Baron at BHP. It’s not the 1911-built one, but the one built in 1936. Link to similar photo with correct information: http://www.ipernity.com/doc/302581/21132161

And now I discover, thanks to a helpful Facebook member, that the ship I had labelled as the French barque Ville de Havre is really the Mount Stewart. This time I plead that I trusted the writing on the back of the photo, which is a very foolish policy at all times.

I could add more clangers to this short list, and perhaps I will sometime. But for now, if you have our books, you might want to get a black pen and make some corrections in your copies, for posterity’s sake.

Victims of the housing bubble