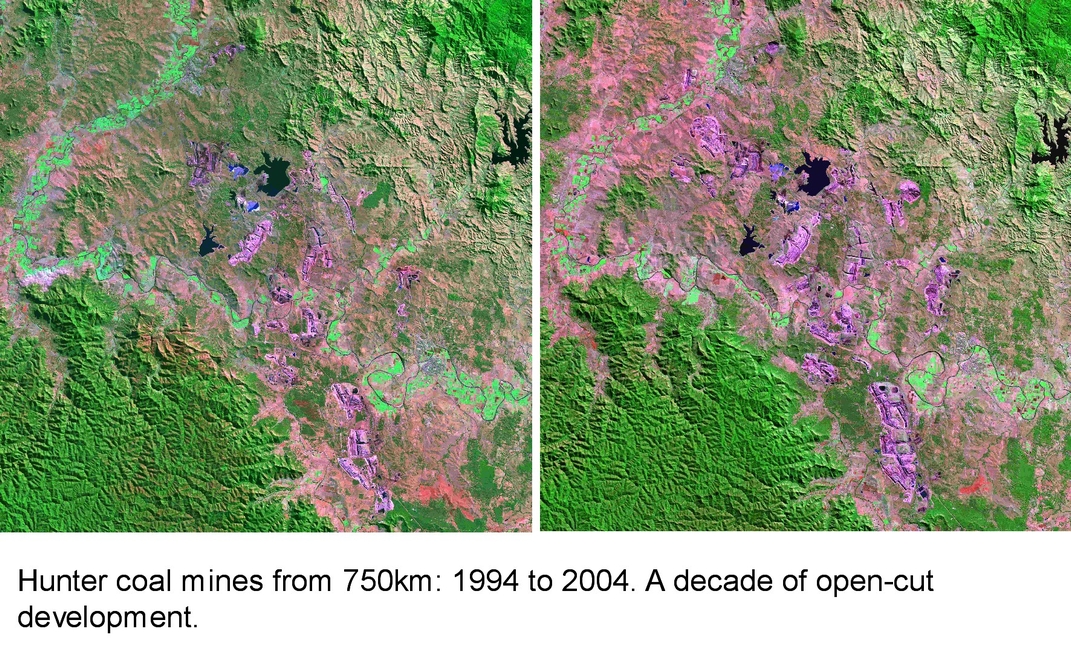 To the moon, with plenty left over.

That’s how far the coal mined from the Hunter Valley in NSW during the decade up to 2010 would have reached, if it had been stacked into a two-square-metre pillar.

I did that calculation when I was working as a reporter at The Newcastle Herald, the newspaper serving the city of Newcastle. Newcastle is the second city of NSW and lies at the mouth of the Hunter Valley. It is often reputed to be the world’s largest coal port, in terms of volume.

My figures didn’t count the coal extracted from the early 19th century – when mining began in Newcastle – to the year 2000, and of course they didn’t count the tonnage mined since 2010. If you took those tonnages into account you could probably triple the thickness of the coal column to the moon and still have plenty left over to start building the next column.

I’m no mathematician, but before the newspaper would publish my article, the editors insisted that mathematicians from Newcastle University check my figures, which they did. And once the article was published, no challenge to its accuracy came from the coal industry, which is always quick to correct the record if it feels its business is being maligned.

Not that the coal industry would be in any way ashamed, I suppose. Digging and selling coal is its aim, and success is measured in growing tonnages through the port. In 2018 Newcastle exported 158.6 million tonnes of coal, slightly down from the record 159 million tonnes of 2017. Back in the year 2000, total exports for the year were just under 70 million tonnes.

Those are impressive sales figures. But the image of that gigantic column reaching into space is sobering, isn’t it?

And where is that coal now? The material that once lay beneath the rich Hunter Valley, a valley once renowned as one of the most fertile and productive in Australia has mostly been sent overseas to be used to fire boilers and generate electricity. Some was used in the Hunter Valley’s own big thermal power stations (Bayswater and Eraring were, at the time, the biggest in Australia). And some was exported to use in steelmaking.

Whatever the use it was put to, that coal has been burned. Its stored energy has been extracted and used and only the by-products remain. For every four to eight tonnes of coal burned, a tonne of ash is left behind. This is an intractable product, and most countries stockpile it in dams where it can become unstable and cause environmental damage.

Just as a matter of interest, if the Hunter Valley had to accept all the ash from its exported coal back from its various customers, it would – by the above numbers – form a very big mountain indeed.

A tonne of coal makes more than two tonnes of CO2

Apart from the ash, you get the waste gases. Nitrous oxide, sulphur dioxide and other unpleasant stuff mostly gets vented into the air, along with carbon dioxide. Carbon emitted from burning coal combines with oxygen from the air, so burning a tonne of coal creates between two and three tonnes of carbon dioxide, each of which occupies a volume of about 550 cubic metres.

So, if Newcastle exports 150 million tonnes of coal in a year, and that coal is all burned, then that’s more than 400 million tonnes of CO2 added to the atmosphere. Multiply that by 550 and you get the volume of the greenhouse gas added to the atmosphere in a year thanks to Hunter Valley coal, not counting the coal burned within Australia and not counting greenhouse gases liberated in the mining process.

The world is a big place, of course, and the atmosphere is quite enormous. That’s why some people like to insist – against decades of expert advice and against past acknowledgements by coal and oil companies themselves – that these volumes of human-generated carbon dioxide make no effective difference to the world’s atmosphere.

Bear in mind though, the Hunter Valley is just one coal producing region among many around the world. And we haven’t even talked here about all the petroleum products extracted and burned around the world since the 1800s.

The attitude of those who are determined – against advice and against evidence – to believe that fossil fuel burning should continue as long as we can make it continue, makes me think of the story of an ancient family of bacteria that evolved on Earth two or three billion years ago. We know these bacteria existed because they left vast deposits of iron ore as their legacy.

Accidental suicide of a species

Scientists believe that the earliest bacteria took chemical nutrients from water and in some cases used hydrogen drawn from hydrogen sulphate gas to fuel photosynthesis. At a certain point some of the bacteria found a way to mine hydrogen from water, a very abundant source. This advance set the stage for long-term massive growth in the worldwide population of the organism.

The chemistry of the new process, however, carried a cost. Splitting a water molecule gave the hungry bacteria two atoms of sought-after hydrogen, but it also released an atom of reactive oxygen into the water. Over millions of years this process, with nothing to interrupt it, “polluted” the oceans and eventually the atmosphere with oxygen. Dissolved iron in the seas reacted with the oxygen atoms, forming rust, which settled to the ocean floors and became the vast iron ore deposits that humans exploit today.

According to author Reg Morrison, in his book Plague Species: “There has never been another pollution event to match the oxygenation of the atmosphere. Originally absent from the Earth’s atmosphere, oxygen now makes up more than one-fifth of it. This accumulation of bacterial oxygen in the biosphere would have been nothing short of catastrophic to the life-forms that preceded it, yet without it we would not exist. It was the leakage of bacterial oxygen from the sea into the atmosphere that turned Earth’s skies blue and built the radiation shield that eventually allowed larger life forms to venture from their watery birthplace and colonise the high ground. And it is that same bacterial oxygen that now fuels the muscular machinery of the entire animal world.”

So it seems that however much some people may wish to believe that our incremental changes to our environment don’t matter in the grand scheme of the total biosphere, they can, they do, they are and they will.

The ancient bacteria were unable to change their programmed behaviour or their destiny. They changed the world, however, by changing the composition of its atmosphere.

Sadly, we humans seem to be acting as though our own destiny were equally pre-ordained.

Setting the scene for recession and World War 3

Australia declares its hand against China