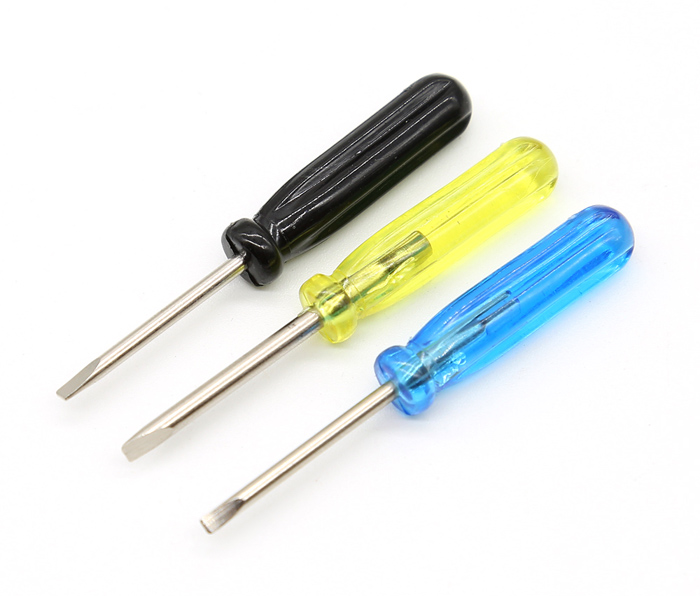 These ones are probably fine, but you get the idea.

IT broke the first time I tried to use it.

Just a little screwdriver, which looked perfectly good in the giant Bunnings hardware barn. Except that when I went to undo a screw, the shaft of the tool turned uselessly in its handle.
Ordinarily when something like this happens with an item that only costs a dollar or two I just throw it away and swear for a while. But this time I pictured the big chain’s buyer, who probably picked this garbage up in a huge job lot for a few cents apiece, sticking it on the shelf at a dollar and laughing to himself. I imagined he was thinking that so few people would return these faulty goods that his employer would get clean away with the profit.
So I took the screwdriver back. I took it to the tool section and showed the person behind the counter. Then I grabbed a few more from the shop shelf and demonstrated that they were all faulty.  The shop employee raised his eyebrows. “Oh well, they’re cheap,” he said. But surely, they aren’t cheap if they don’t work.
I’m sick of things that don’t work.
I’ve encountered drinking glasses with rims that chip from the slightest bump and are then fit for nothing but the garbage bin. A coffee mug that split from top to bottom as soon as boiling water was poured into it. Batteries that last about five minutes. Pens that don’t write. Countless children’s toys that were so poorly made they never had the slightest chance of working. Tennis balls with lopsided bounces.

The packaging promises some wonderful result

Electronic goods seem to suffer disproportionately. The packaging promises some wonderful result, but the reality – when you finally decipher the weird instructions and set the thing up – is often disappointing. I’m talking about transformers that burn out, media players full of glitches and any number of devices that seem interesting but are really just frustrating.

Bear in mind I’m not even dealing here with those expensive goods whose manufacturers deliberately sabotage them with destructive software “updates” that make them useless. Although my bitterness over the two tablet computers – a Google Nexus and an Asus – which I bought and loved until they were updated into oblivion will never fade away. Great bits of gear that were turned into useless garbage by software updates.

This year’s faulty goods register is filling up pretty quickly. First there was the Smeg oven. Yes, it’s a good oven. It works really well. But like most modern ovens the lining stuff just doesn’t last like the enamel they used in the olden days. The coating they use these days seems often to crack into splinters with no provocation, so Smeg has replaced our oven linings a few times. To their credit they are good about honouring their warranties. In fact they go above and beyond, which is to their credit. This year our Smeg suffered a massive fail when some milk in a saucepan on the cooktop above the oven boiled over. A little bit of boiling milk went behind the fascia of the oven and shorted out the circuits, sending sparks and smoke through the kitchen. I call this a dangerous design flaw. Things boil over in kitchens. It’s very foreseeable.

Smeg replaced the oven – as they should have – and added a seal to prevent fluid seeping between the metal skins of the oven’s outer shell. And I went round the edge with silicone too, just to be sure.

I could fill a whole rubbish bin with lousy tools and hardware I shouldn’t have bought. Spanners whose chrome peels off and cuts your fingers. Screws whose heads come off if you try to tighten them, or whose slots disintegrate at the slightest pressure. Pipe cutters whose blades chip at the first challenge. Drills that disintegrate under pressure.
Once I needed some reinforced duct tape. I grabbed a brand that I recognised as having been around for years. When I went to use the tape I discovered it wasn’t sticky. And when I read the label I found that, brand notwithstanding, this tape was imported from one of those countries that seem to specialise in products that don’t work.
Back to the shop for the American-made brand at three times the price: but at least this time it actually stuck.

Recently I went out to buy some electric fans. I didn’t anticipate any problems because fans are very simple consumer items. I’ve bought fans in years gone by and they have always been fine. But this time it was a battle finding any that were not out-and-out rubbish. Most of them were made in you-know-where, and I was amazed at how low the typical quality was. Blades with sharp, rough burrs on their edges. Casings made of silver plastic apparently designed to trick you into thinking they are metal. Blades that are held on their shafts with no more than a crummy little screw that doesn’t even key into a flat portion of the shaft end, and that doesn’t tighten enough to ensure the blades will stay in place. Honestly, the manufacturing short-cuts were terrible to see. I thought the all-plastic fans from a decade ago were el-cheapo, but they are superbly made compared to what I found this time. Two of the three I decided to buy had to go back to the shop in the following days: one because it emitted a burning smell every time it was used, and the other because its oscillating mechanism actually collapsed.

Another recent annoying experience involved drill bits. I was so sick of tools breaking as soon as I started using them. I thought I’d spend more money and get something better. When I bought these drill bits at Sydney Tools I asked the guys there about them. They said they were pretty good and they’d had no complaints. The set wasn’t marketed as budget: it cost about $150 or so.Except this is what happened: the bits twisted right out of their hex shanks. This happened to four of them, under the same conditions of usage I customarily apply to drill bits. Anyway, we complained about them falling apart and said we didn’t think they were actually fit for purpose. The guys at the store said (A) The bits looked well-used, and (B) What did we expect? The shop imports them from China. So, apparently I should have realised they weren’t very good quality and treated them really gently.

I don’t know who annoys me most in all this, the manufacturer, the importer or the retailer. Presumably the manufacturer is skimping on costs in the expectation that some idiot will still buy the goods. It’s a kind of tragedy though, that valuable time and resources are being wasted to create goods that have no utility or value.
I guess the importers and retailers are getting the stuff at dirt cheap prices. But what’s the point even offering these items to the public when a few rudimentary checks will demonstrate that they are useless? One answer may be that some retailers are knowingly accepting money for products that are worth nothing.
I’ve got a problem with that, and I propose a solution. Even though sellers love to quote that old adage, “let the buyer beware”, it isn’t really that simple.
Back in my uni days, when I dabbled briefly in law, there was a concept called “merchantable quality”. And, free trade agreements notwithstanding, the concept still exists in Australian common law and in the Trade Practices Act. Under the law, goods have to meet a basic level of quality, they have to do the job that they are being sold to do, they have to meet their description and they have to be free from hidden defects.
Bearing that in mind, let’s stop giving these ratbags money for nothing.
Next time you buy some item that falls apart as soon as you try to use it, take the blasted thing back and demand a refund. Force the retailer to waste some time and paper processing a credit.
If enough people start doing this we can make it so expensive for the shops to sell rubbish that they might reconsider some of their purchasing policies. Maybe they won’t buy any more screwdrivers that don’t drive screws or sticky tape that isn’t sticky or coffee cups that won’t hold hot coffee.

Shaking a tower with Rev. Spooner

Les Lumsdon, a life in cartoons