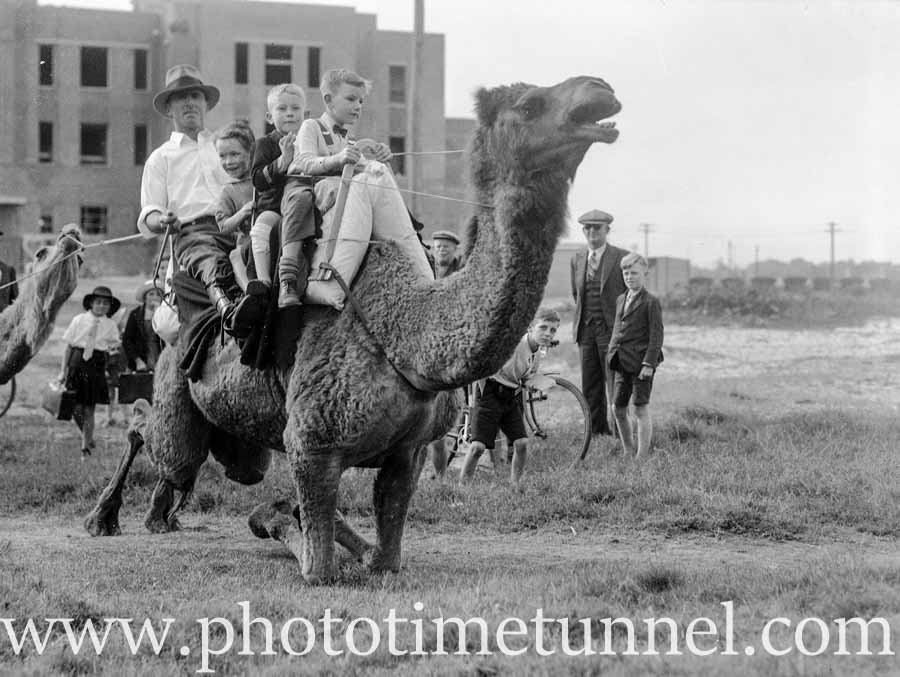 When the above photo appeared in our first book, Newcastle, The Missing Years, we were delighted to hear from the family of the camel-wrangler. Marilyn Bycroft got in touch to tell us that it was her father, Dick Jones, in the photo.

Dick apparently seldom discussed his early life, but his family was from Tasmania. He had left home at the age of 12, was sent back to his parents, then ran away for good at age 14 to get a job on an outback cattle station. He never saw his parents again. Dick had many jobs on stations and once worked for “cattle king” Sydney Kidman. He was reputed once to have joined a man named “Tom” on a search for Lasseter’s fabled lost gold reef.

During the hungry 1930s Dick had a camel train with which he delivered goods to stations across the outback, while in the wet season he travelled up and down the East Coast giving penny camel rides to children at shows and events.

On a visit to Newcastle in 1933 Dick, then aged 30, met 17-year-old Kathleen Elkington at a football club fund-raising card game at Tighes Hill. He was camping with his camels at the time on vacant land behind the nunnery. Dick met Kathleen’s family and when I spoke to her in 2011 Kathleen recalled that “that was it”. He came back next day to discuss marriage, and although Kathleen’s mother wanted her to wait, Dick said he was off to Cronulla and couldn’t wait. They married on November 20, 1933.

Dick and Kathleen travelled with their camels Rajah, Beauty, Violet and Prissy between the NSW south coast and Queensland, then across to Broome, visiting all the agricultural shows they could. Kathleen said her son Frank was born in a tent under a tree at Eungai on the NSW north coast. It was a lovely life, she recalled.

In 1941 Dick was obliged to get a job because of the wartime manpower clampdown. The couple sold their camels and moved to Newcastle where Dick worked at the BHP steelworks. He worked as an engine driver and according to family tradition his engine was called Kathleen.

In later years Dick had a fruit run and finished his working life at Rylands works in Newcastle. He died in about 1980, and Kathleen outlived him by 30 years, surviving into her mid-90s.