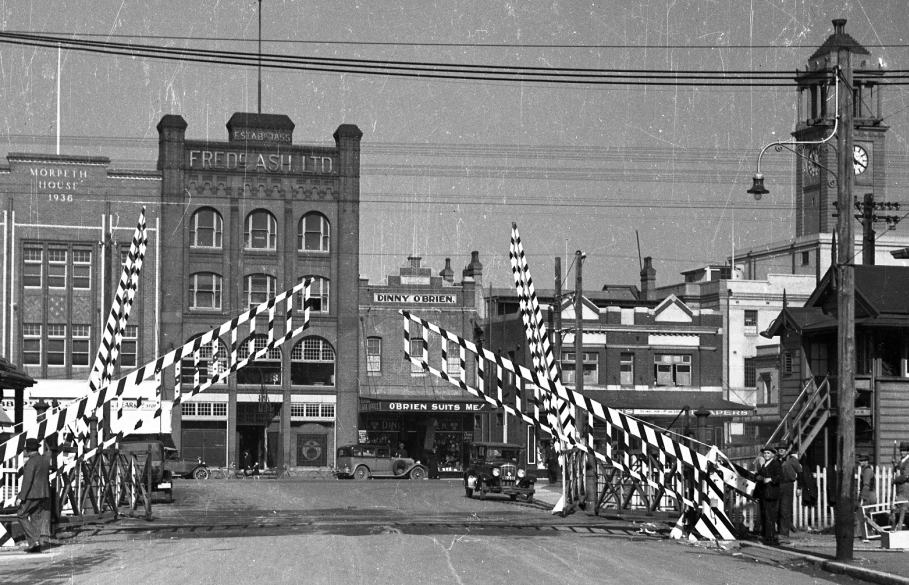 DINNY O’Brien was a Newcastle legend in his lifetime, and even today his name conjures memories for many who recall his landmark pawnshop on Hunter Street. He and his wife Margaret had five sons and a daughter. I interviewed Tom O’Brien some years ago, when he was aged 94 and the last survivor of Dinny’s children. Tom was deeply proud of the business his father built, and which sustained generations of the extended family in good years and bad.

Dinny lived originally at Largs, and his first business was a tailor shop in Maitland. He apparently boasted that his was the first shop in Maitland to have electric light in front of the store. In about 1916 he moved his business to Hunter Street, Newcastle, but it was not particularly successful. But because the shop he occupied had previously housed a second-hand dealer, many visitors came to the store inquiring about second-hand goods. That, according to Tom, inspired Dinny to branch out from tailoring into the second-hand trade – a business he quickly found to be lucrative and interesting. At some point later he got a pawnbroking licence, and the legend was born.

Tom worked in the shop from the age of 14, when the Great Depression was at its height. “We had some famous customers, as well as some of Newcastle’s worst crooks,” Tom said.

In those days, he said, the shop was like a modern-day charity store – since none of those existed at that time. Credit cards didn’t exist either, of course, and pawnbrokers could play a useful role in tiding people over from one pay to the next. “We really did a lot of good for a lot of people during those years,” Tom said. “A lot of families would have missed a lot of mealtimes without Dinny O’Brien’s as a last-minute stop-gap.”

The pawnshop occupied 357 Hunter Street, and the family lived in a flat above, when the nearby Frederic Ash hardware store went up in flames during one terrifying night. “I was only young then, I hadn’t started school,” Tom said. “Our family spent the night in the Merewether Street railway signal box across the road and we thought our shop was going to go. I remember the tins exploding and later on the coloured paint from burst cans all over the walls.”

“During the war years the shop was a few doors west, at 363 Hunter Street, and that was its most famous and successful location,” Tom said. Tom, Jim and Harry were all in the army then, and Bill kept shop. “Businesspeople did well in the war years,” he said. “There was a lot of money around and there was a boom in gambling, especially.”

Tom was posted to Darwin, where he lived through many Japanese air raids. “I wasn’t there for the original raid, but I saw many. They’d come over every Sunday, just after Mass, and we’d all be diving for the slit trenches,” he said.

Dinny O’Brien’s was famous for cheeky marketing. Signs proclaimed slogans like “Nobody calls me dear”, or “O’Brien’s suits me” (a reference to the second-hand clothes Dinny repaired and sold). The typical pledges were watches and rings, and most were redeemed by their owners before their time was up. But there were oddities, from time to time. Like the set of bagpipes Dinny made a loan on, but then couldn’t sell when the owner didn’t bother coming back. “In the end Dad took them to Sydney, where he knew some other pawnbrokers, and he tried to get them to lend on the bagpipes,” Tom said. “The first one told Dad he’d lend him any amount he needed, but no way would he take the pipes.”

One of Dinny’s grand-daughters (Jim’s daughter, Lynda) recalled the shop acting as a bank for a number of local bookmakers. “They each had their own tray in one of the safes and on Monday mornings they’d come in and pawn goods to pay off their debts from the weekend, or else they’d buy more gold and jewellery to keep in their trays,” she said.

Lynda and her husband Russell still own the old shop’s awning sign and the three-ball pawnbroker sign that used to hang in front. “It’s made of old toilet cistern floats,” Lynda confided.

Dinny’s had many regular customers. One, “Rosie”, was an old lady who came every off-pension week and one of the boys (all of whom were called “Dinny” by the public) would make her a cup of tea in the pledge-room. “They’d go to the Victory Sponge Kitchen and get her a cake and they’d have tea with Rosie. She always pawned the same watch, just to get through to the next pay,” Russell said.

Another time an angry woman came in and pawned her husband’s trousers. “She said he’d lost all their money at the races, and this was her revenge. She only got five bob for the pants, which were thrown in the five bob bin. “Next thing her husband comes in demanding his pants. When he got them, he opened a side pocket and pulled out a big roll of notes. He’d actually done very well at the races, but his wife didn’t know,” Lynda said.

Dinny’s suffered a very big professional burglary, with the robbers entering through the roof and dynamiting the safes. “They got away with a huge amount of watches and jewellery, and none of it was ever recovered,” Tom said. In true Dinny’s fashion, the next advertising slogan declared: “Even the burglars know where the good bargains are”.

Tom’s great love was horses and saddlery, and he started selling a line of budget goods from the shop, earning Dinny’s a good name in that area. In more recent years, the store moved further west along Hunter Street and changed character once or twice as the younger generation took over. But times were changing, and so were the laws governing pawnshops and the second-hand trade. Consumer credit became widespread and easy to get, the frugal, waste-not, want-not ethos of the Depression gave way to the throwaway society and pawnbrokers were no longer allowed to sell goods on their own account when pledges elapsed.

A remarkable era had passed, but the name of Dinny O’Brien’s remains etched on the Novocastrian memory.