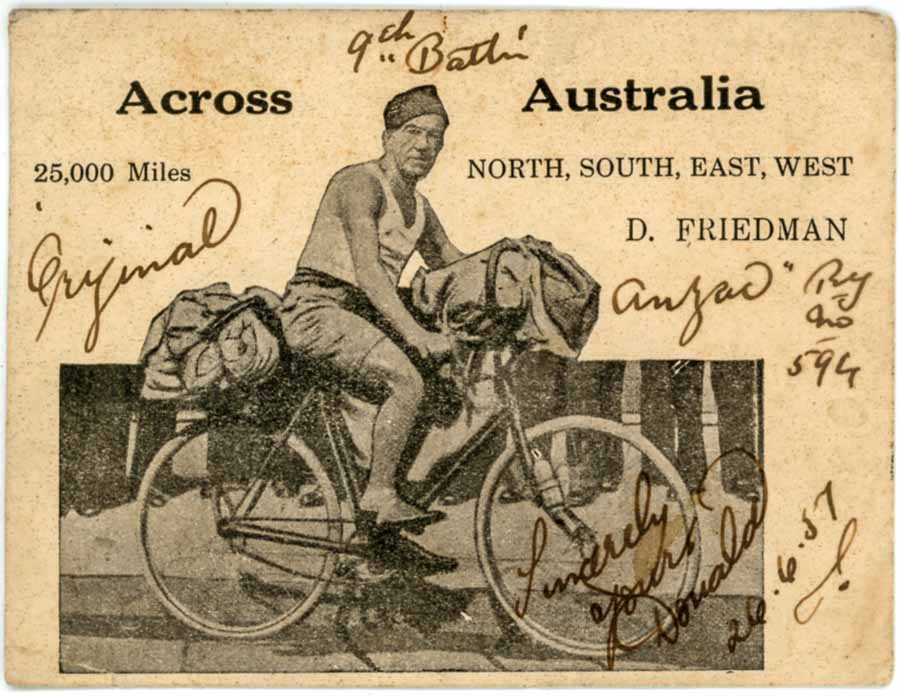 One of Donald Friedman's postcards. As a soldier he was a great cyclist.

He enlisted in the Australian Imperial Force twice during The Great War, under different names, and was drummed out both times, actually earning a seven-year sentence for desertion. Postwar he turned to “overland cycling”, chasing money to exploit a gold deposit he claimed he’d found near Darwin. He was found dead on a lonely outback road in 1938.

The postcard proclaims the cyclist pictured to be Donald Friedman, an “original Anzac” and a member of the 9th Battalion. This transcontinental traveller funded his journeying through the sale of such cards, and by appealing, in newspaper interviews, for donations of replacement cycles and parts. He told more than one reporter of his plans to write a book, to be titled Two Sides of Human Nature.

It would surely have been a good read, if he’d ever gotten around to writing it. But he might as easily have called it Two Sides of Donald Friedman. One of those sides would have had a different name, however: Reginald Lewis Harris. Because Friedman enlisted and served under both names – although “served” might not be the description some of his comrades in arms would have chosen to describe his activities whilst in uniform. Incidentally, he was never in the 9th Battalion as he claimed, but in the 1st Field Artillery Brigade and the 49th Battalion

Having chanced on one of Friedman’s postcards I looked up his military record on the Australian Archives website – and found more than I’d bargained for. It seems he signed up first in August 1914, under his own name, declaring himself to be a 25-year-old cook. His records under his real name are scanty, but it’s clear things didn’t go well, as he was severely disciplined and sent back to Australia in disgrace aboard the Kyarra in February 1915. His commanding officer declared that: “This man is of dirty habits and repellent to his comrades. He is inefficient and I consider him incapable of improvement”.

For some inexplicable reason he enlisted again, this time under the alias Reginald Lewis Harris, and left Brisbane aboard the Seang Bee in October 1915. Again, things didn’t go well – and that is an understatement. Harris/Friedman was in almost constant trouble for being absent without leave, disobeying orders and – ultimately – desertion. In amongst all the charges he found time to go to England for treatment to a gunshot wound to his shoulder, but it is unclear how this occurred since his duties appeared to be strictly of the behind-the-lines type. Fortunately for him, his seven-year jail sentence was commuted to two years and then suspended, so by 1919 he was able to leave military prison and head back home to Australia on the City of Exeter. Not surprisingly, he went AWL when the ship touched in at Fremantle.

It isn’t clear what happened to him after that, until he began writing to military authorities during the Great Depression – using both names in separate correspondence – asking for copies of his discharge certificates – which he needed to claim the dole. According to differing accounts in his various letters, his original documents had been either lost, stolen or accidentally destroyed. It seems to have taken about four years before the authorities managed to connect Friedman and “Harris” as the same person, and before Friedman was able to provide a statutory declaration to confirm that was the case.

By at least 1934 Friedman had begun describing himself as an “overland cyclist” and in that capacity it seems he was truly a high achiever, covering vast distances on a heavily loaded bicycle. It is likely that he was a pioneer of sorts on these long, lonely and hazardous routes, and press coverage of his efforts led to various cycle and cycle tyre companies donating products to help him on his way. A common theme in his interviews was his description of himself as a “prospector” and his claim to have found a wonderful deposit of alluvial gold near Brocks Creek, not far from Darwin, which would have made him rich if only he could find enough water nearby, attract capital from willing investors and placate hostile indigenous people whom he claimed had once speared him in the leg.

One of his most illuminating interviews appeared in The Murumbidgee Irrigator on July 7, 1936, in which portions of Friedman’s diary were reproduced. According to this account, he first set off on his bicycle trek in January 1934, leaving Bathurst, NSW, with no clear destination in mind. He went to Sydney, then Melbourne, then Adelaide before setting his sights on a trip to Darwin, via Port Augusta, Alice Springs, Tennant Creek, Birdum, Katherine River and Pine Creek. After some weeks in Darwin he set off again and started “scratching” for gold west of Brocks Creek.

After doing a little ‘scratching’ for about five weeks, I got onto some very fine alluvial gold. Hanging on to this spot things began to brighten up a little for me. As my supplies were just about finished I decided to cover my bit of a show over and replenish my cupboard before digging in to any depth. There was just one obstacle in my way and that was, of course, not enough water to carry on with. However, I “dry-blowed” a fair sized parcel which brought me about 11 1/2 ounces of fine gold, and as it was impossible to hang on any longer without the precious fluid, which is as a matter of fact more valuable than all the gold put together, I had to leave at once. This time I headed for Brisbane, through Newcastle Waters, Dally Waters, Brunette Downs, Alexandria, Anthony’s Lagoon, Camooweal, Mt. Isa, Cloncurry and Rockhampton. All this time I was in search of a mate whom I could trust, but he could not be found. So on I went further south to Sydney still pushing my bicycle. Eventually I gave up looking for a mate and went on to Adelaide again. After thinking things out seriously I decided to go on back to Darwin, but not over the same route I had previously travelled.

When going from Adelaide direct to Darwin earlier I had nearly lost my life owing to running out of water. I had to hold up a mail train, after waiting nearly a whole day for its welcome arrival. This mail only runs through once a fortnight, from Port Augusta to Alice Springs. People along the line term it the “Ghan Express”. So as to give you some idea of the nature of the couutry where I nearly “went out to it,” it is possible to see this train for about five hours before it reaches one. I was given a wonderful reception when I stopped tlie train. The crew of the engine and the few passengers on board fitted me out well. From there I had another 10 miles to cycle amongst sandhills before I reached another of those welcome fettling camps. ‘To catch up with my trip, I decided I’d to go from Adelaide to Perth via Port Augusta direct to Ceduna, Eucla, Madura Pass, Ballodonia, Frazers Range, Norseman, Coolgardie, Kalgoorlie and then Perth. On this trip I crossed the dreaded Nullabor Plains. From Perth I struck out in a rough and northerly direction through Carnarvon, Onslow and right on to Wyndham, Halls Creek and then struck the Katherine again. It did not take me long then to get back to my show. This time I really thought I had the world at my feet, having brought with me a parcel of black tobacco thinking I could bribe the Aborigines with it. However, once again the aborigines proved hostile.

I knew for certain there was water in the district and hoped that by bribing the natives with the tobacco they would tell me where their waterholes were. They did not. It is also impossible to induce them to leave this part of the country, and that makes me more certain there is water in abundance somewhere about. Once again I had to leave the show and return to Perth, very disappointed. Still pushing the same bicycle, I went through to Collie, Bunbury, Busselton, Port Augusta and back to Bunbury and then direct to Albany and Fremantle to Midland Junction, Northam, Kalgoorlie, and Coolgardie to Port Augusta. I had made up my mind to go on to Broken Hill and then on to Sydney. I left Eucla on April 15 of this year and had a few setbacks on the way over. At Poochera my headpiece broke. This I considered rather lucky that it should break while I was not riding. If it had done so I would certainly have been badly injured on those terribly rough roads. After striking a lot of wet weather, during which I had to stop every few yards and scrape the mud from my wheels so that they would turn, I arrived at Kimba. I left this place on June 3 for Iron Knob. Once again wet weather delayed me and I had to stop at the catchment tank 25 miles from Kimba. Prior to getting there I had met some men who were grading the road, and accepted their kind invitation to lunch.

Again I kicked off bright and early for Iron Knob, and to my surprise when I went in to supper at the eating house run by the Government I met an old school chum of mine. From there I went on to Port Augusta, where the postmaster refused to stamp my diary. From Port Augusta I went to Wilmington and then into Orroroo. After spending a little time at stations in the district I headed for Yunta, where I met the main line for Broken Hill.

It appears he never did strike it rich from his gold deposit, nor write his promised book. He passed through Newcastle, NSW, in March 1938, was in Ipswich by early May, aiming for Darwin again.

But a short paragraph in the Mackay Daily Mercury brings the story to an end. The article states that he was “found dead on Barclay Downs Station, 45 miles from the homestead on the Mount Isa road. He had died from sunstroke”.

The Tweed Daily, at Murwillumbah, added a little more detail, stating that Friedman had been working at Barclay Downs for a few weeks before heading off towards Darwin. His bicycle had been found abandoned not far from a musterers’ camp, and his body was found under a tree not far away. “Out on the extreme edge of western Queensland, a few miles from the Northern Territory, his bones will remain under a tree on which a cross is marked by an axe, and which henceforth will be known as ‘Friedman’s Tree’,” the paper reported.

Victims of the housing bubble

Bashing students with the bible