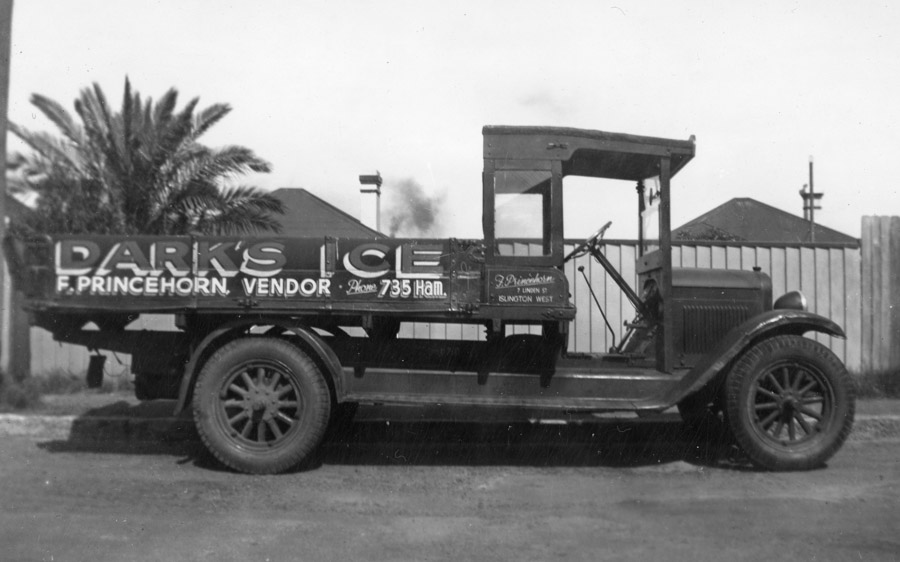 During World War II Islington ice carrier Fred Princehorn had trouble getting employees to help him on his run. Not surprising, since most employable men were either in the armed forces or in protected industries.

Luckily Fred had his 15-year-old daughter Elva at home, and she put up her hand to be his delivery assistant. It was a job Elva loved, despite the early mornings. Elva’s dad would wake her at 1am, they’d have breakfast and hop on the truck for the trip to Dark’s ice works in Newcastle where they would load up with blocks for the day’s run. They’d make their first call about 3am and finish about 1pm – time for lunch.

That was the routine on Mondays, Wednesdays, Fridays and Saturday mornings. There were hundreds of customers, all around Hamilton and Islington. The family lived in Linden Street, Islington West – an area transformed by the arrival of the tech college at Tighes Hill.

Bad weather was no excuse for a day off, and the blocks of ice were heavy too. And there were other odd quirks of the job, like deliveries to flats upstairs in Hamilton whose inhabitants kept the ice-chest in their bedrooms – they had nowhere else to put it in their tiny flat. “They left their bedroom door open and I just walked in and put the ice in the chest,” Elva said. “I didn’t mind if they didn’t mind.”

A standard block of ice cost one shilling and one penny, but there were nine-penny blocks too (a flat shape) and the big blocks could be cut in half to make two sevenpence blocks. Once a fortnight Elva had to ride the rounds on her pushbike to collect money from those who had chosen to buy their ice on credit.

The truck had a clever system for tipping the melt-water onto the road as it went along.

Elva’s favourite customer was the elderly lady at the end of the run at Islington West who always saved the young girl a piece of last night’s dessert. A handy perk of being up early came on the days when the fruit trucks were heading to the city markets. “They drove so fast that sometimes they’d lose a cauliflower or a cabbage, and we’d be the first on the scene,” Elva laughed.

“One day the truck got a puncture with nearly a full load of ice near James Street, Hamilton. While Dad struggled to change the tyre, the Blackmores – who owned the shop opposite – brought over tea and a snack on a silver tray for us,” she recalled.

Elva married at 19, becoming Elva Delforce, and she quit the ice run then, though she came back now and then to help out.

Thanks to Elva and her daughter, Julie Austin, for sharing this story and photos.