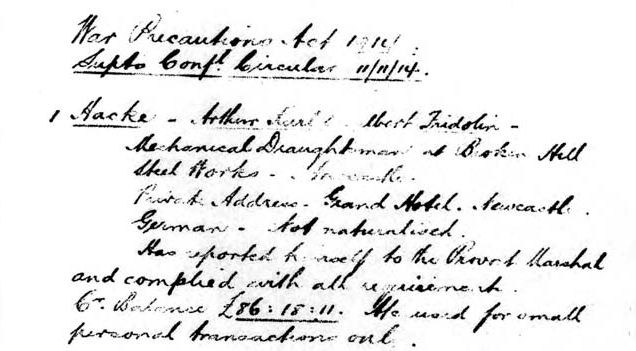 It was not a good thing to be German in Australia in 1914. The outbreak of the First World War meant that anybody with German heritage was instantly under suspicion of disloyalty, and it wasn’t long before many were rounded up and placed in internment camps.

A copy of a 1914 letter from the Newcastle branch manager of the Bank of Australasia, William Miles Coverdale, shows how closely people with German links were being scrutinised by authorities.

Mr Coverdale was required by the War Precautions Act 1914 to report to his head office on any suspicious account activity relating to German customers of his branch, and his letter, dated November 24, 1914, tells the story of three local men.

The first named in the letter was Arthur Hacke, a draughtsman at Newcastle’s BHP steelworks. He was a German citizen, not naturalised, and his private address was Newcastle’s Grand Hotel. “Has reported himself to the Provost Marshal and complied with all requirements,” Mr Coverdale wrote of Hacke. The cusomer had a “credit balance £86:18:11. Account used for small personal transactions only”.

“There have been no abnormal, unusual or suspicious operations on accounts at this branch,” Mr Coverdale wrote.

Another customer, whose name is illegible in the letter, had a different story: He “was an engineer at Broken Hill Steel Works Newcastle. German, not naturalised. Was liable for military service. Drew the balance of his account £105-00 on the 4/8/14 and is believed to have left for Germany,” the bank manager wrote.

“It was understood that these amounts were to pay for coal bought from Sydney for a firm in South America. A ship carrying the second consignment was refused a clearance by the Customs Dept and I believe the coal was resold,” Mr Coverdale reported.

The unfortunate Mr Johanssen was, at the time of the letter, imprisoned in the “concentration camp in Liverpool”.

People of German extraction in Australia were imprisoned in a variety of locations. Liverpool and Holdsworthy were large camps. At Holdsworthy about 6000 people lived in cramped and fairly unpleasant conditions. At Torrens Island, in South Australia, some German citizens received unusually brutal treatment from one Australian commandant, whose behaviour ultimately led to his dismissal.

Well-to-do and well-connected prisoners were later transferred to the relatively idyllic conditions at the former convict prison at Trial Bay, NSW, where they were allowed great freedom to spend their money, to swim and fish and even build their own small cabins outside the prison walls.

Among these fortunate ones was an interesting character, Paul Dubotzki, a photographer who had been part of a “scientific”expedition to Asia before the war broke out. It seems reasonable to suggest that Dubotzki was some sort of spy, since many of his photos appeared to relate to strategic industries, and he wrote on the back of his prints in a form of code.

While interned in Australia he was given plenty of freedom to take and develop photographs, and the story of how his images came to be rediscovered is a fascinating one.

In 2004 playwright Nadine Helmi was viewing the archives at the Trial Bay Gaol Museum when some striking photos caught her eye. She saw the name of the photographer, and also saw a book showing his intended address in Germany after the war – the small town of Dorfen, near Munich. Helmi contacted the library in Dorfen and was referred to a local history society which then put her in touch with Paul Dubotzki’s elderly daughters. It emerged that he had taken his extensive Australian photo archive back to Germany after the war. Helmi was granted access and produced an interesting book, The Enemy at Home, based on the images.

In 1918 the prison was shut down amid a scare based on an alleged German escape plot, and the internees were transferred back to Holdsworthy before being deported a year later. A monument the internees had built at Trial Bay to honour some of their number who had died during internment was dynamited by vigilante locals.