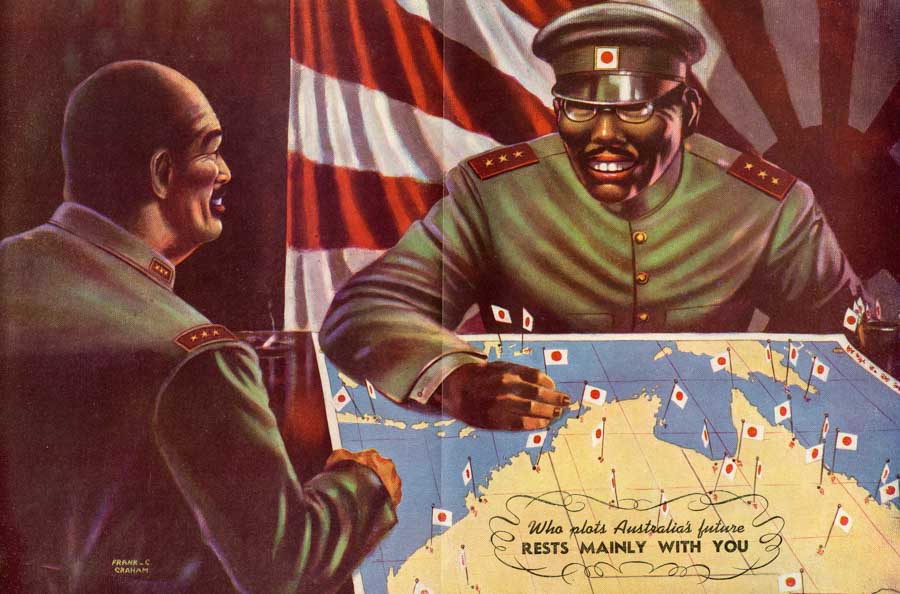 For Australia, “the yellow peril” has always been a defining factor in nationhood.

It didn’t take long, after white colonisers arrived on the great southern continent, for fears of the “Asiatic hordes” to take root and grow. Being an English colony on Asia’s doorstep explains it, of course. And hence the anti-Chinese sentiment in the Gold Rush days, the anti-Asian-labour sentiments that ebbed and flowed over decades, the White Australia Policy and Britain’s calculated use of colonial fears of Japanese invasion to induce Australia to raise an army just in time for the slaughter of The Great War.

Fast forward to World War 2, then Vietnam and see Australia, always fearful, always awaiting marching orders from the distant overlords of the British and American empires, with instant obedience the price of anticipated protection from the dangers to the north.

And now, in 2022, Australia faces the rise of China which, in a remarkably short time has emerged as a global trading colossus and is visibly growing in military might. In some ways it feels a little like it might have felt as The Great War loomed in the early years of the 20th century. Then, Germany was striving to rise as a world power, trying to elbow Britain aside and planning how it might become the pre-eminent force on continental Europe. For its part, Britain wasn’t willing to take a backward step and the result was a catastrophic war fought primarily on other people’s soil.

Some might see China and the USA in the same roles now, with one striving to rise and the other determined to maintain its ground and to hold its rivals down. For Australians it’s hardly a comfortable picture to contemplate, though just such pictures have dominated the national psyche for more than a century. The old questions are still current. Will our alliance with our imperial masters continue to shield us from aggressive intentions? Will our powerful friends come to our aid if and when we need them? Might Australia become a battlefield if another military struggle occurs between great powers?

It is true that the USA represents the most powerful empire the world has ever seen, with a global  network of military bases, an astounding armoury of every imaginable type of weaponry, an all-seeing web of spy satellites and a multi-layered set of intelligence services so opaque that not even elected presidents know all there is to know about them. But it is also true that America, like all great imperial powers, openly admits that friendships can be subordinate to interests. And many Australians may still recall how the global power Britain behaved towards Australia in World War 2 when the “invincible fortress” of Singapore was easily taken by the Japanese. Britain’s anxiety for its own situation made Australia a subordinate consideration, a reality that drove Australia into the arms of the USA as its new, more powerful protector.

Is it conceivable that the US could come to a strategic accommodation with China that sacrifices Australia to the Chinese sphere of influence? This is what many Australians fear to contemplate.

In June 2019, when three Chinese warships sailed breezily into Sydney Harbour it was nothing if not a demonstration. They came because they could. For all the prime minister’s nonchalant remark that it was an expected, reciprocal visit, it didn’t look or feel that way, and many who perhaps ought to have known about an expected visit were clearly surprised.

For its part, the US under Obama made its “pivot to Asia”, with more troops and more military resources deployed to Australia as an obvious gesture in China’s direction. Tensions over the South China Sea, and the redrawing of Asian alliances in the face of China’s rise have all been part of the same gradually developing picture.

Former US President Donald Trump’s noisy baiting of China changed the tempo of an already tense relationship between the incumbent superpower and the rising force. Diplomatic language has been replaced by openly hostile propaganda and Australia is in the front line of this war of words and trade. Australia’s rapid adoption of the American script has only made the fault-line between the blocs more pronounced. Of course there is a price to pay.

Australia’s economy has come to depend heavily on China, and it will be difficult to achieve the “de-coupling” that commentators are now discussing. Unlike Australia, perhaps, China seems to have been anticipating this moment, having invested widely around in the world in alternative sources of the raw materials it buys from Australia.

In this context, the ramping up by China of anti-Australian propaganda was really just something to be expected. For example, the tweeting by Zhao Lijian, deputy director of China’s Ministry of Foreign Affairs, of a computer-generated image representing a key allegation in the Brereton Report into alleged Australian war crimes in Afghanistan – that two young Afghan boys had their throats cut and were thrown into a river by Australian soldiers.

Australia and its allies rushed to call the image – by a well-known Chinese computer artist who specialises in sharp political commentary – “fake” and “false”. That’s almost beside the point. It might equally be said that this image is akin to sharp, hard-hitting cartoons produced over many years by western artists drawing attention to atrocities and alleged atrocities of many kinds.

Insulting? Yes, certainly. Propaganda is often insulting, and deliberately so. In the same way, Australia’s furious reaction is also part propaganda that simultaneously tries to cast doubt on the allegation in the Brereton Report and to demonise the Chinese as liars and purveyors of fakery.

Frankly, Australia is now on the frontier of a cold war, where truth becomes less important than perception. Even if the language between the two hostile blocs becomes more civil under a new US administration, the lines have been openly drawn. Now the gloves are off, things can never go back to the way they were.

Something beautiful every day