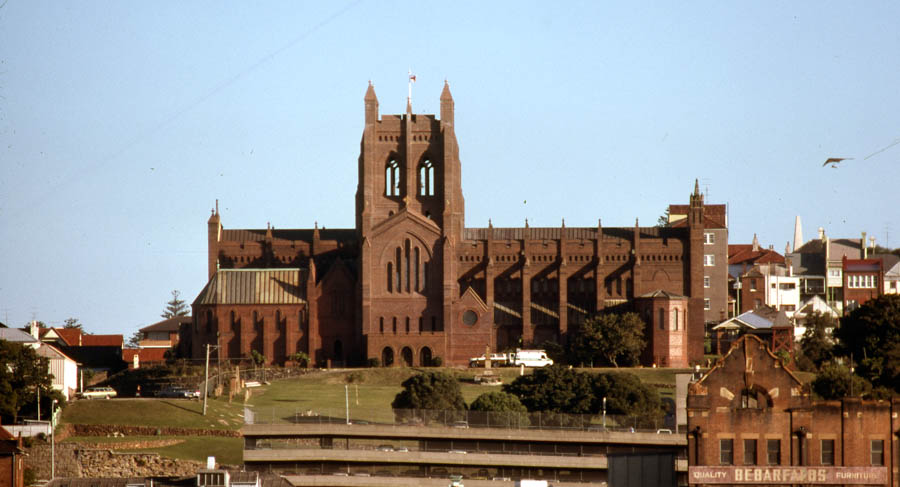 From our book, The Hunter Region in The Great War

The Church of England played an important role in Australia and no less in Newcastle at the time of the Great War of 1914-1918. People turned to their church leaders to help them see and understand moral dimensions to great events and they gathered as congregations to share good times and bad.
While many churches across the Hunter retain relics of the Great War, the collection in Newcastle’s Christ Church Cathedral is almost certainly the most significant.

The war and its aftermath prompted some of the cathedral’s wealthiest and most generous donors to commission the famous Warrior’s Chapel, around which many other relics have been gathered. The chapel, at the north-eastern side of the cathedral, measures 14 by 5.5 metres and is 15 metres high. It has 13 stained glass windows that overlook a large bronze casket representing the tomb of the unknown soldier. The statue that lies on the casket bears the face of Alfred Henry Forster, son of Englishman Lord Henry William Forster, one-time Governor-General of Australia. Alfred Forster died of war wounds in 1919.

War memorials were of great emotional importance to bereaved families at a time when it was not practical for the remains of fallen soldiers to be returned to Australia, nor for most families to afford the long and expensive voyage overseas to visit war cemeteries. Physical memorials provided a focus for grieving. Famous Australian metalsmith William Mark was commissioned to create 11 artworks to enhance Newcastle’s Warrior’s Chapel. These include the sanctuary lamp and the Christus on the southern wall, the cross and candlesticks for the altar, the gold chalice and paten and the extraordinary Book of Gold.

The Book of Gold is a book of remembrance, listing in lovingly executed illuminated calligraphy the names of Anglican Great War dead from the parishes of the Newcastle Diocese. The covers of the book are gold and the front cover is decorated with precious stones and an enamel of the Dove of Peace. Much of the gold used to create the book and the other memorial items came from jewellery donated by Hunter Valley women, including war widows who provided their engagement and wedding rings.

One of the cathedral’s prized treasures is the framed and faded silk Union Jack flag, now preserved behind glass, which was presented to the cathedral in 1916 by 13th Battalion commander Lieutenant-Colonel Granville J. Burnage. Inscribed nearby are the words: “To the immortal memory of the 15 officers and 385 soldiers of the 13th Battalion AIF (Australian Imperial Force) who gave their lives at Gallipoli. Their sacrifice is our heritage, ‘Lest We Forget’.”
The cathedral also owns the so-called “Birdwood Flag”. This was a gift to General Birdwood from the Newcastle-based NSW Field Force Fund. General Birdwood personally presented this flag to the people of Newcastle in 1920 and it has since become the subject of a major restoration effort.
Another treasure of the cathedral is the Victoria Cross awarded posthumously to Captain Clarence Jeffries in 1917. Only a replica of this precious medal is on display: The original is kept in safe storage.

Christ Church Cathedral is the spiritual home in Australia of the Great War organisation “Toc H”, which survives today as a general service movement.
Toc H started its life in Poperinghe, Belgium, when British Army chaplain P. B. “Tubby” Clayton and colleague Neville Talbot began using a house as an informal club for front-line soldiers in need of respite. When Talbot’s brother was killed in battle, the house became known as Talbot House in his memory. This was shortened, using army signaller notation, to “Toc H”. The house incorporated a non-denominational chapel, with a carpenter’s bench as its altar.

After the war a new Toc H was opened in London and a movement of Toc H branches, dedicated to peace and public service, sprang up all over the British Empire. Toc H chose a simple lamp as its symbol, and new branches had to earn the right to keep a lamp of their own.

The post-war Dean of Christ Church Cathedral, Horace Crotty, had been an AIF chaplain and a friend of Clayton. In 1923, the then Governor-General of Australia, Lord Forster, decided to endow a Toc H lamp in Australia in memory of his two sons who were killed in the war. In 1924 a lamp was lit by the Toc H patron, the Prince of Wales, in London’s Albert Hall. This “Forster lamp” was brought to Australia in 1925 to be presented to the first Toc H branch in Australia. To avoid competition and possible ill-feeling, it was decided instead to put the lamp at Newcastle. This was done in 1926 at a ceremony attended by more than 2000 people. In 1927, a festival was held in Christ Church Cathedral at which the Forster Lamp was used to light five other Toc H Lamps – from Perth, Adelaide, Melbourne, Sydney and Newcastle. The Toc H lamp is dedicated to the memory of Lt Thomas Noel Stretch, son of Newcastle’s first Australian-born bishop, who was killed in action in 1918.

From 1925 to 1953, Toc H’s Newcastle branch was run from a donated room in the Anzac Memorial building in Perkin Street (the RSL headquarters) but in 1953 The Newcastle Morning Herald reported that the trustees of the building evicted the organisation so it could rent the space for money. It was presumably at this time that the branch’s carpenter bench altar – based on the one used at Poperinghe during the war – was shifted to the Cathedral. This altar was donated by hardware company owner Henry Lane and his wife in memory of their son, Arthur Edward Lane, who was killed by a shark at Merewether Beach in 1928. Under the bench is a sculpture of “Chippy Mark IV” the last of a long line of Cairn Terriers that were given to Chaplain Tubby Clayton, first by Queen Mary and later by Queen Elizabeth, the Queen Mother.

Also linked to Toc H is the plain wooden cross that hangs on the wall of the Warrior’s Chapel. This is one of the original wooden crosses taken from the grave of an unknown soldier in France, and presented to Dean Crotty by the Prince of Wales at a Toc H festival in Manchester in 1927. I am not sure whether this is the cross that was one of the few relics rescued from the post-earthquake ruins of the Perkin Street RSL headquarters in 1989.