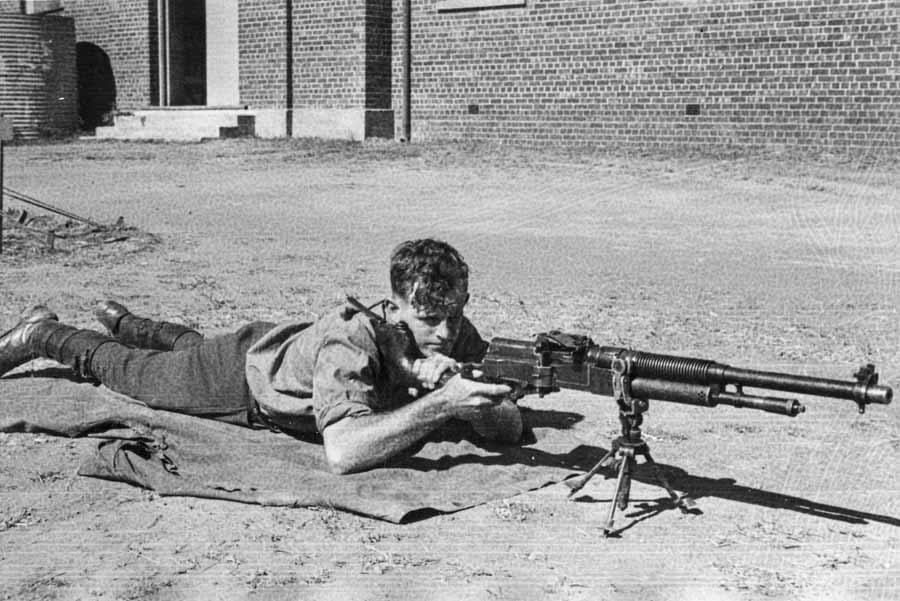 WHEN the Australian Army invited Harry Boyle to enter a services shooting contest during World War II, they told him first prize was three weeks leave. They didn’t tell him about the other prize until he won it. Harry swore he wouldn’t have competed if he’d known exactly what being identified as “marksman, first class” would mean. Harry, then in his early 20s, had helped feed his family during the Great Depression with his gun and his exceptional marksmanship.

In 1942, the military authorities were looking for men like Harry to do dangerous, secret work. These men would wage war outside the rule book; fighting without regular identification and with only a handful of top brass even knowing they existed. When they were talked about, which was seldom, they went collectively by the name “Z-Force”. Even today very little is known of the true extent of their activities. Most of the Z-Force archives have been destroyed and the men themselves, ordered by the military to keep their secrets, have mostly taken their memories to their graves.

Harry Boyle was to become a well-loved amateur historian in Maitland and was awarded an Order of Australia. He told me his Z-Force story while I was working as a reporter at The Newcastle Herald, promising to tell me more another time. Sadly, he passed away in 2005 – aged 86 – before we got the chance to talk again.

As a Z-Force commando, Harry spent six months as part of a small group of similarly handpicked men behind Japanese lines in 1943. He went to New Guinea on HMAS Katoomba and was dropped deep in Japanese-held territory by an American Catalina flying boat. There were thought to be two divisions of Japanese in the area and the Allied command wanted to know exactly where they were and how hard they would be to shift. “We found them all right,” Harry told me. “And they still had plenty of fight in them.” The group’s instructions were to avoid direct conflict if possible but once, when a group of about 60 Japanese was passing, one of the commandos tried to talk his comrades into trying to wipe them out. “He said we could win Victoria Crosses, but we told him we’d prefer returned serviceman’s badges.”

“Bugger your f—-ng kitbag, we’re getting out of here.”

Harry’s best mate was a big man named Joe Compton. At Joe’s funeral in Australia many years later Harry told how the pair had enlisted and trained together, gone AWOL together, become NCOs together and experienced the best and worst of times together. Once, when Harry was lying unconscious near Dobodura in the New Guinea jungle – stricken with malaria – his unit was preparing to shift to a new location. Joe wouldn’t leave until he found his sick mate and when he did find him, he hoisted him over his shoulder and carted him back to the rest of the unit. Harry, who never swore, begged Joe to go back for his kitbag, which was stuffed full of souvenirs – Japanese flags, swords and similar items. Joe’s reply was blunt: “Bugger your f—-ng kitbag, we’re getting out of here”. “Only for that I would not be here today,” Harry said at Joe’s funeral.

Harry’s group’s tasks ranged from the straightforward to the downright strange. One job involved setting up some American-made loudspeakers close to Japanese positions and playing recordings of sentimental music and loud exhortations urging the enemy to surrender. Needless to say, the Japanese weren’t impressed.

Life in the jungle was extremely hard. The rain was incessant. The terrain was swampy and infested with mosquitoes and leeches. The Japanese, alerted to the Australians’ existence, hunted them day and night. Arriving in the Sepik River district, Harry’s group walked into a tribal conflict in which one group was trying to raid another’s precious vegetable patch. Some warning shots from the commandos drove off the aggressors, and from then on the soldiers had the best protection they could have wanted. The natives made the men sleeping bags of grass fibre woven so tightly that even ants couldn’t get in. They stood guard over them every, night, often waking them and guiding them on desperate escapes when the Japanese came too close for comfort. All the while they were in touch with their headquarters via a radio that they used to make their reports and to arrange for resupply and evacuation of the wounded.

The group lived on emergency rations. “They kept you alive but your entrails felt as if they were hanging on knobs on your backbone,” Harry recalled. On November 19, 1943, the party’s luck almost ran out at a place called East Post, between the villages of Wagamush and Kosiarbu on the Upper Sepik. A much bigger force of Japanese located the Australians and pinned them down against the river, forcing them to fight desperately for their lives. While under attack, the group’s radio operator sent an SOS to Allied forces occupying Kosiarbu, but a fluke bullet smashed the radio set partway through the transmission. The next day, an American Catalina, numbered 34, resupplied Kosiarbu and was given the news of the supposed massacre of the party of Australians at East Post. The Catalina pilot decided to detour via East Post on his way back to Port Moresby and avenge the slaughtered Aussies. In fact, Harry and his colleagues, now down to just seven men, had managed to beat the Japanese off, bluffing them into thinking they were a much stronger force than they really were. According to Harry, the long night’s battle was a vicious war of nerves, with the Japanese barely 20 metres away in the darkness. It was shown later that the little party of Australians had inflicted heavy losses on the Japanese. In the morning, awaiting the relief they thought would follow their interrupted radio SOS of the previous night, the commandos saw a Japanese motor launch approaching up the river. Aboard were about 20 soldiers seated back-to-back, and the launch was piloted by a sailor standing behind a high metal plate. An officer stood at the rear and the boat was motoring straight towards the Australian position.

Surviving a “friendly fire” strafe by the Americans

Knowing there was no chance of escape if the enemy saw them and gained the initiative, Harry and his mates attacked the boat, which backed up hurriedly and sank in the river. At about this time, the American Catalina arrived. Harry and his mates heard the distinctive sound of the Catalina’s engines and waved at the plane. The Cat pilot assumed the waving men were Japanese, strafed them with machine-gun fire, banked and made two more strafing runs. “At first we just froze but then we bolted for cover,” Harry said. “I ended up in a ditch with just my rear end sticking out.” The Cat poured a storm of lead into the area, killing a native police boy who was with the Australians. When the aircraft’s ammunition was exhausted and it turned to leave, one of the commandos ran to the river and waved a white flag with the signal “T” painted on it, which should have identified the group as friendly. With no acknowledgement, the Catalina flew away.

For another month, the commandos continued with their work in the Upper Sepik, always under the noses of the Japanese. On one occasion a Catalina landed on the river to resupply the men and warned them that two large formations of enemy troops were nearby. The Cat pilot lent the Aussies one of the big 50-calibre machine guns from his plane and the commandos set it up in case of a large-scale attack. Not long afterwards, their native guardians warned them of an approaching force of Japanese. The enemy spied the Australian position and the Aussies dug in, preparing for an attack. Under cover of darkness the Japanese charged. Harry said the noise of the American machine-gun was shocking. Mingled with the normal bullets in the machine-gun belt were explosive rounds and tracers that lit up the jungle and blasted everything they hit. After just one sweep across the front of the enemy charge, the gun jammed and there was silence. Though the commandos waited, tense beside their guns, all night, there was no second attack. Next morning they could see why. The explosive rounds from the heavy machine-gun had turned a broad swathe of jungle to matchwood, “just as if it had been through a chaff cutter”. If any Japanese survived the shocking hail of fire, they did not remain in the vicinity.

Harry’s group was evacuated shortly after that attack, on Christmas Eve 1943, by another Catalina. “I’ll never forget its name,” Harry said. “It was called ‘El Snatcho’. We were glad to see that plane, I can tell you.” Feeling sorry about the strafing incident, the US 5th Air Force invited the men to its headquarters, where they were treated to American-style hospitality with beer and good-quality cigarettes. The highlight of the evening was a private viewing of the gun-camera film from Catalina 34, taken during the strafing. “Looking at the way the bullets were smashing into the bushes, cutting everything to pieces, you would never believe anything could live through it,” Harry said. And at the end of the film, the lone commando waving the white flag with the letter “T” was clearly visible. Recalling the eventual rescue of the men in an article in the American services magazine Yank Down Under (April 21, 1944), a Catalina crewman described landing on the river as “a little tricky”. “The Sepik was only two wingspans wide at that point and we sat down in the middle of it, between the snags.”

Jailed in Sydney for lack of military identification

Long after the war, an Australian senior officer admitted that nobody expected the Z-Force men to get back alive from the mission. When Harry and his mates got to Sydney they were thrown in jail by middle-ranking officers who would not accept the men’s explanation for their lack of normal military identification. They spent a weekend in the lock-up before the top brass responsible for Z-Force ordered their release.

For years Harry kept his wartime secrets close to his chest. “It was drummed into us that we weren’t supposed to talk about it,” he said.

The Mont Pelee eruption of May 1902