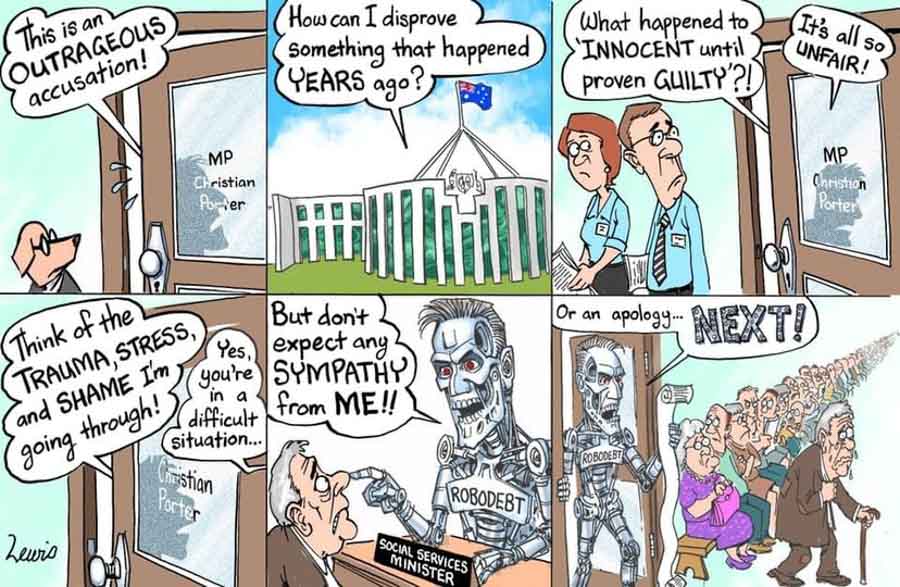 Sometimes what seems to be the cleverest solution to one problem can prove to be the dumbest when other factors are considered. I have a feeling that Attorney-General Christian Porter’s defamation actions against the ABC and journalist Louise Milligan may become a case in point.

The move must seem irresistibly clever to Coalition strategists. It provides a piece of cover for the Government’s already strenuous efforts to shut down discussion of the historical rape allegations against the Attorney-General. It involves putting massive pressure – including more financial pressure – on the Government’s hated ABC. It shows again that individual journalists can be targeted for their work (remember the AFP raids?). It allows the Government to assert – as the prime minister already has – that the defamation action is a satisfactory substitute for an independent inquiry that many have been asking for.

One of Mr Porter’s high-priced legal team, “reputational expert” Rebekah Giles, claimed Porter had been the victim of a “trial by media” which should “end with the commencement of these proceedings”. “The claims made by the ABC and Ms Milligan will be determined in a court in a procedurally fair process,” Giles said. “Mr Porter will have and will exercise the opportunity to give evidence denying these false allegations on oath.”

In other words, now the defamation action has been announced we want the media to stop talking about the issue, because somehow a defamation trial will be a good forum to obtain the truth of the matter. So stop asking for an inquiry because this will be one.

Such an ideal strategy, right?

Well, maybe. But then again, maybe not.

As I’ve written before, this present chapter of the long-running saga of misogyny in Australian politics isn’t like some of the earlier ones. It feels different, like a line has finally been crossed. And the anger about the apparent suppression of the rape allegations by parliamentary staffer Brittany Higgins – the apparent refusal to listen and the seeming impunity afforded the alleged perpetrator – is a real-world phenomenon, not a political artifice. Scott Morrison seemed almost to realise this, albeit dimly, when he dropped his “father of daughters” clanger, apparently inspired by a conversation with his wife over the rights and wrongs of rape. But having made that mistake he seemed to pull up the drawbridge, order more pots of boiling oil and set the archers on the battlements.

When the historical rape allegations emerged – to be strenuously denied by Mr Porter – Morrison and his Government seemed to be in full defensive mode. No further wifely consultations were referred to. Documents were studiously unread. The convenient disinterest of Constable Plod was trumpeted as akin to a declaration of the falsity of the allegations, and the denials of the accused were given the status of an ironclad verdict of innocence. All the while shouting about the “rule of law” and shutting down the conversation at every opportunity.

If they weren’t politicians, or if they were politicians with an ear for the real world like – for example – New Zealand PM Jacinda Ardern, they’d have seen that it didn’t have to be like this. There were other ways to handle it. A real leader might have said: “While I fully support my Attorney-General and accept his denials, I’ve spoken to him at length and – having read the allegations that were made by a person now sadly deceased – we’ve agreed that the important thing is to provide a forum where the Australian people can see all the facts of the matter, openly and honestly. We’ve both agreed that these are terrible allegations from any point of view and we agree that, painful as it is for the Attorney-General, he will stand aside while this inquiry proceeds. We want the matter resolved transparently and as quickly as it can be.”

Somebody else could have stepped up to be Attorney-General. Porter would have stayed in Parliament while the inquiry progressed and, assuming he was cleared in due course, would have come back stronger than before to a Government that had clawed back some moral high ground and won respect from many voters.

Instead, they’ve taken the path that looked politically smart. Hunker down, lash out, deny, refuse.

These are presumably political decisions made by a Government that has shown again and again that it cares much more about political appearances than about substance. And yet, even by that cynical measure, it’s handling of this whole snowballing disaster has been incomprehensibly wrong.

In the real world, where people make decisions about how to vote, the Government has made itself look bad. It took a matter of genuine concern to a great many people and treated it like a faked up political stunt. And every single time it got a chance to start to turn that mistake around, it threw the chance away and gave the finger instead.

I doubt whether all the bluster, hired muscle and fake news distractions will rescue Scomo from this mess. The defamation action, which at first glance may seem so clever for so many political reasons, is the icing on a bad cake made of wrong ingredients.

Let’s see who ends up having to eat it.

Mementos of my grandparents