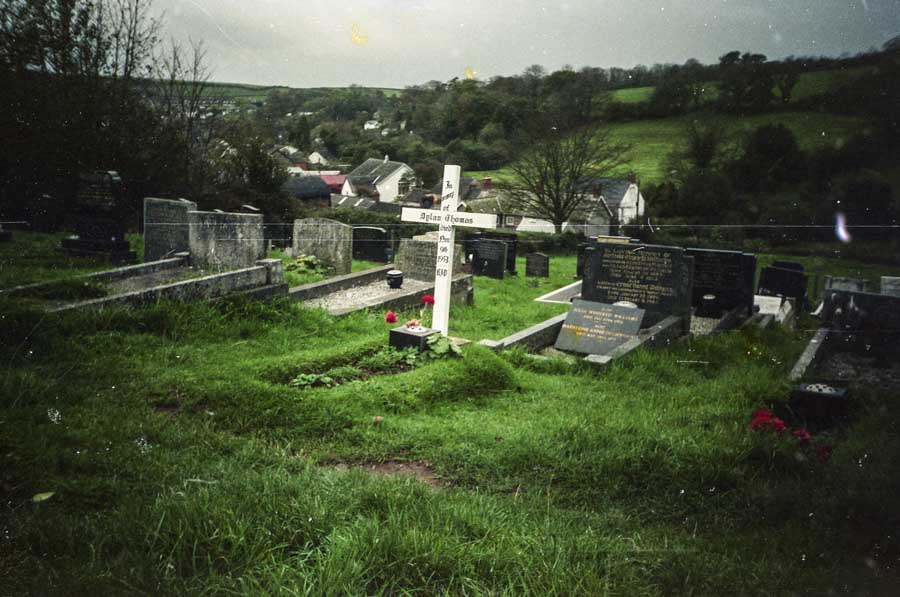 I wrote this piece back in 1986 or 1987, after a visit to the British Isles with my friend and fellow journalist Scott Bevan. It’s obviously out of date, and many of the observations I made at the time are probably unfair or incorrect. But it brings back nice memories, so I’ll place it here.

It happened, like all the best things, completely by chance.

We had been driving almost all day; from the English-Welsh border town of Chepstow, along some of the most bewildering motorways in all Britain, through shirtsleeved Cardiff, past the tragic industrial hinterland of Port Talbot, to Little England Beyond Wales.

There we found Laugharne, an old village bisected by a modern road, where long ago the mythical Merlin dreamed his prophesies, and more recently, the poet Dylan Thomas found inspiration for some of his finest work.

Leaving the foggy ruins of Chepstow castle in the early hours, we set off towards Porthcawl, the ancestral home of the Bevans, from whom my travelling companion Scott was descended. After our earlier experience of the tranquil Wye Valley, at whose Southern end was garrisoned Chepstow, the coast of South Wales was a sobering reminder of the price of “progress”. Every green hill seemed chewed and clawed apart by explosions and steel. Houses from a rustic and charming past forlornly bowed to the overwhelming presence of heavy traffic and ugly concrete buildings.

We were lost for hours in a town called Barry. Two languages, English and Welsh, fought for our attention on every road sign. Although English mostly appeared to be winning, it didn’t seem to have enough energy left after the fight to be really useful. The vague directions offered by the signs combined with garbled instructions from the local Welsh to keep us circling on endless roundabouts for the best part of an afternoon.

Approaching nervous breakdown, we stopped at a group of shops and asked a butcher how to get out of Barry. Glad of the conversation, he rolled a cigarette and, leaning on his cutting block, drew us the most confusing map imaginable. Getting out of town entailed negotiating seven roundabouts, watching for certain signs and landmarks and praying for a little luck. Thanking the butcher, we steeled ourselves again and set out. In the chaos of traffic we lost count of our roundabouts, but finally got far enough in the right direction to escape the all-swallowing black hole of Barry.

Our entry into Porthcawl was just as difficult. Signs misled, continually trying to send us further down the motorway to a place called Port Talbot. All the big trucks seemed to be going there.

A minefield of roundabouts

With the precision of a NASA shuttle pilot, Scott guided us out of the practically magnetic motorway and set us up on an approach path to Porthcawl. Decelerating through the hazy atmosphere, we curved our flight through another minefield of roundabouts and entered Porthcawl, a holiday town for Welsh factory workers. At first we laughed at the ancient postcards and the neurotic-looking amusement park that sprouted its own little roundabouts on the edge of town like some piece of industrial infrastructure. Later, depressed by the asphalted beach, the oily waves and the grimy sky, we slunk back into the motorway’s irritable stream of traffic. Surrounded by thundering trucks and frowning drivers, we watched the night come down in a thin, greasy drizzle.

We had thought of finding a Bed and Breakfast (B&B) in the Brecon Beacons National Park, but the M4 wouldn’t let us go. It carried us, like a stone in the tread of a grimy workboot, to Port Talbot. On our left were grey lowlands, a hint of uninviting ocean and a dense smoke pall hanging low over the ugliest and most extensive stretch of heavy industry I’ve ever seen. Suddenly the traffic was denser, jammed, full of tension and unpredictability. Signs warned drivers to stay in their cars in the event of breakdown. We struggled along between hostile trucks and frustrated commuters. Narrow rows of grimy brown houses huddled close to the factories, shoulder to stoic shoulder like football supporters in a rainstorm. Ratty soccer fields and playing children were dwarfed against a backdrop of industrial forms, following incomprehensible functions. These functions in their turn followed science and economics, leaving Wales and its green uniqueness irreparably far behind. On our right was a chain of open valleys where old villages were fighting and going under, worn down by the dead weight of demand that pressed for more stoic rows of cheap, dense housing. The hills were torn in places from quarrying and pipelines. This Wales seemed a conquered country, despite the unpronounceable protests on its road signs.

Scott and I were tired out and looking for somewhere to stay before fleeing north to England’s Lakes District. Our depression grew as each town brought more of the ugly same. Spewing chimneys; angry faces; duffel-coats shuffling to the off-licence; teenagers stumbling stoned in chilly car-parks.

Carmarthen, Merlin’s town, looked inviting on the map. Its musical name promised magic and mystery. I was later told that the town had fought for years to keep what was reputed to be the old wizard’s tree in the ground. The necessary road diversion proved too much of a problem and the tree – a sad old stump, went to the local museum. There had been a legend that, if the tree was ever moved (or destroyed, some sources suggested) the town of Carmarthen would fall. With all respect to the folk of Merlin’s town, the legend seemed to be coming true. Carmarthen seemed a raw and unhappy place, a view readily agreed to by residents of villages nearby, who feared Carmarthen as a place of violence and theft, of sly sizing-ups and fast moves. We drove on, no longer on the motorway, with night falling fast and the countryside coming closer.

Poring over our AA guide in the dim light, we decided to head for a fishing village called Tenby, where, come what may, we would spend the night. A pair of vaguely labelled roundabouts took us through a town called St Clears, then flung us out like a centrifuge towards the coast. Suddenly we were in the main street of a small town. We didn’t even look at the map. There were three B&Bs within a hundred metres, so we stopped and knocked at their doors.

The third one, an ancient two-storey cottage, had vacant rooms, into which we gratefully stumbled, stretching our legs at last and looking forward to sleep. I was showering, luxuriating in the warm water, too tired to recognise the verses sticky-taped to the bathroom wall:

Every morning when I wake, Dear Lord, a little prayer I make: O please to keep thy lovely eye On all poor creatures born to die.

There was a clatter on the old wooden stairs and I heard Scott calling my name. “Guess who lived in this town?” he was shouting. I couldn’t guess.

I looked back at the verses and this time I recognised The Reverend Eli Jenkins’ sunset poem, from Thomas’s Under Milk Wood. We were in Laugharne, the seaside town where Dylan Thomas spent a number of his pre-war years, drinking in the pubs and writing in his famous boathouse. Long an admirer of Thomas’s intricate and musical work, I felt blessed by chance to find myself in this undistinguished looking town. But I hardly dared hope that anything remaining here would give an insight into the poet and his sometimes confusing work.

Later, when our exhaustion faded a little, we looked into the wood-vaulted room where Thomas’s wife, Caitlin, was due to stay in a few days after we left. The house, like the town itself, was full of history – a most eccentric history that stretched back hundreds of years before Thomas to a time when Merlin prophesied the town’s ascendancy over nearby Carmarthen and Kidwelly. Our landlady, Mrs Pruden, gave us the rundown on the local pubs, and we stepped out to find a meal, and a drink to wash it down.

The first pub, Browns, sported a sign featuring Thomas’s distinctive profile, and we stepped inside for an ale. But the atmosphere, anything but welcoming, saw us head for the cold air again after only one drink. Next we walked into The New Three Mariners, a pub whose sign featured a trio of boozy sailor-suited ghosts flying among the chimneys and spires of a town. Within minutes the crowd at the bar swallowed us up. There was Stella, the busty Flemish girl from Red Rose, a nearby village. And Glynn, the old man who talked offhandedly about his experiences of Thomas. And all the other Laugharnies, as they called themselves, who drank and laughed with us until the pub officially closed at 11pm. Then the doors were closed, the curtains drawn and the lights and noise turned down. Still the drinkers stayed, long past 2am when Scott and I spilled out, past the secret-knocking late-arrivals, to our respective spinning beds.

Laugharne has an aura all of its own. People from other towns and villages spoke of Laugharnies as an obscure inbred race as peculiar as their town. The people of Laugharne saw themselves as an oasis of humanity in an increasingly inhuman Wales. Or rather, Little England and Beyond Wales, as the immediate area is still known. Once, when Wales was a big headache for the English, the more powerful country installed a colony of English and Flemish immigrants in the Southwest to break the country up and to introduce a strong conservative strain to counter Welsh hostility.

So Laugharne, like Dylan Thomas himself, was geographically in Wales, but spiritually in a sort of Welshified outpost of England. In his best work Thomas, who spoke no Welsh, made of English a lyrical tribute to nature and to Wales but found his fame in England and America. Even now the “real” Welsh are scornful of Little Englanders.

To the Laugharnies Thomas was just another eccentric among many, exiled in this most peculiar of towns. Many older folk are still surprised that he became famous. Some didn’t even know he was a writer until he died in 1953, bringing people from all over the world to his funeral. But now he is almost a Pharlap in the town’s psyche. The golden boy, lured in his innocence to decadence and death in the United States.

In Laugharne’s ancient graveyard, where the Bethesda of Under Milk Wood’s Llareggyb is irresistibly evoked, owls fly quietly out of elms and oaks so old and huge that, caught in a downpour, I sheltered dry under leaves as thick as thatch.

There was a little track through the long grass to Thomas’s grave. Plastic flowers stood unashamed under the only wooden cross in the whole cemetery. All other graves were marked by stone. Permanence and impermanence are relative and therefore ultimately meaningless. But that slim white cross, wet from the rain that washed the green village, had a sadness all of its own.

My bleak predictions for the years ahead

What happens next in Ukraine?