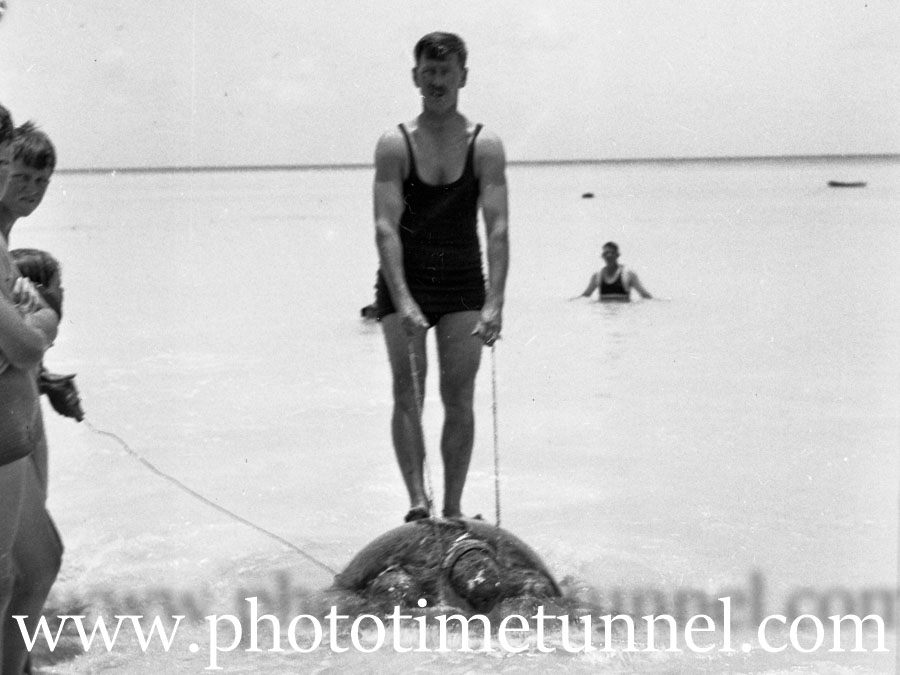 Bevis Platt riding on a turtle on the Great Barrier Reef

Some time ago, in an antique shop near Tamworth, NSW, I bought a collection of photographic negatives. It was an interesting and quite large collection, with some glass plates and some film negatives, as well as some magic lantern slides and prints.

The antique dealer told me the collection had belonged to a man named Bevis Platt, who had been a British officer serving in World War 1 and then later a science teacher at Tamworth High School. Platt had married the widowed mother of noted Tamworth local historian Lyall Green, and the couple had moved to England after Platt retired. Green inherited Platt’s belongings and when Green died in Tamworth, aged 100, in 2016, the estate was dispersed.

The negatives I bought included a handful from postwar Europe. Platt seems to have been stationed in Bonn straight after the war, and then to have toured some of the European capitals.

Once in Australia, it seems he visited the Great Barrier Reef in the 1920s and made some extensive rail tours in the early 1930s, taking photos of towns and cities across the nation.

As I scanned the collection I found myself wanting to learn more about Bevis Platt, and I scoured the internet for the scant information that was available. Just as I made up my mind to write a blog post about him, I received two emails from England.

Because I had loaded some of Bevis Platt’s photos to our website, search engines now bring up our site when his name is typed in. Hence the emails to us from the Rev Dr Adrian Burdon of the Shaw and Royton Circuit of the Methodist Church, and from Alan Heywood, of Washbrook Methodist church, Chadderton. Dr Burdon and Mr Heywood wanted to know about Bevis Platt because their churches had recently received word that they were to get cash legacies in Platt’s name, but nobody seemed to know how this had come about.

It’s a curious mystery, since Platt died in 1979. So, here’s what I know about Bevis Platt. Perhaps somebody will read this and tell me more.

Bevis Platt was born on January 23, 1889, the son of Edwin Platt – a grocer of Ivy Cottage, Eaves Lane, Hollinwood. His mother’s name was Jane. He attended Oldham Hulme Grammar School from 1902 to 1906 and received a Master of Science degree from Manchester University in 1911.

He served in WW1 as a lieutenant in the Royal Engineers and in 1919 was attached to the Royal Garrison Artillery.

He moved to Australia in the 1920s and was teaching in Queensland until 1929 when he quit a job as teacher of electrical subjects at Brisbane’s Central Technical College. During the 1940s he was teaching at Tamworth High School in NSW, and he married Margaret, the widowed mother of eminent Tamworth local historian Lyall Green.

This poor-quality negative, from among Platt’s collection, shows a “stone laying ceremony” at Shore Edge church, perhaps in the 1910s or 1920s.

More recently I was contacted by Paris-based dealer in Oceanic art, Anthony Meyer, who wrote the following:

“Bevis Platt is well-known in the Oceanic Art circles for having gone to New Britain in the 1920s and spent time there. I own an artwork collected by him as he put together a collection of New Britain tribal art at the time. Most importantly he was an avid photographer and there is a collection of glass slides still in Australia to my knowledge that were made in New Britain. I only have one image which pertains to the piece I own.”

When Sydney came to Newcastle