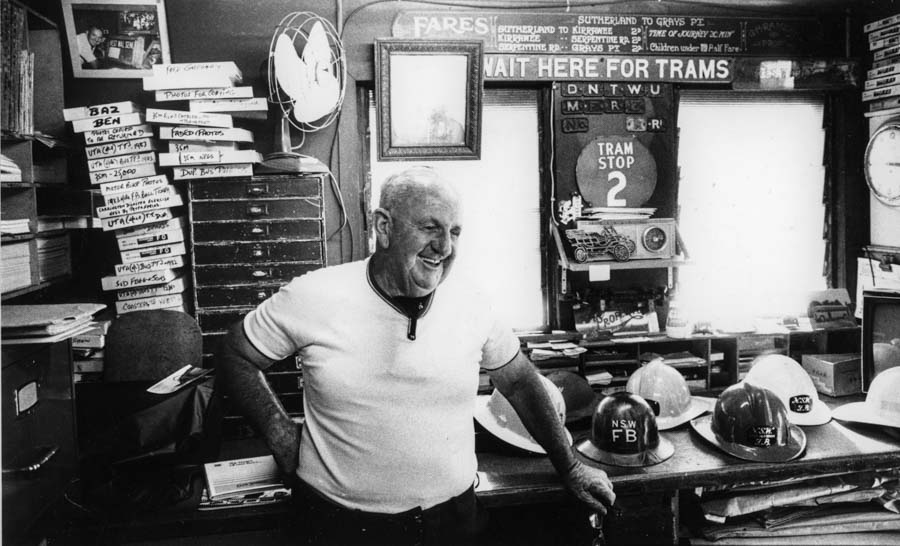 Ken Magor was a passionate Newcastle-based collector of transport and fire brigade memorabilia who, at the time of his death in 1993, had amassed about 250,000 photographic negatives, in addition to a huge collection of other items.

A career fireman, he was well-known among fire brigade employees and a prominent member of a small but extremely active group of transport enthusiasts who made it their business to keep the memory of old-time transport modes alive.

Ken was born in Broken Hill, NSW, on December 12, 1912, and died in Newcastle on March 9, 1993, aged 80. His father was a well-known veteran miner, Don “Logic” Magor, who was forced to retire on medical grounds after a long career when his lungs were found to have been damaged by dust. He married twice. His first wife, Louisa – whom he married in 1944 – passed away in 1964. The couple had one son – Barry. Ken’s second wife, Mary, brought a step-daughter – Betty – to the marriage.

His lifelong love affair with transport started with his first job as a “grease monkey” at Bill Welsh’s garage in Broken Hill, earning 10 shillings a week working on Studebaker cars and Rugby cars and trucks. After a short stint working for a jeweller, he took a job in 1928 as a bus boy (conductor) earning 30 shillings a week on the Cock Robin, one of the hard-tyred buses that served the town in those days. During the Depression he worked 16 hours a day, seven days a week. In 1936 he left the buses for a stint at Broken Hill’s Zinc Corporation mine, where he was trained in the use of resuscitation equipment. He was a keen member of the St John’s Ambulance, and the diaries of his time with this service survive.

His dream was to join the fire brigade, but the books were closed in the Great Depression and no new staff were being hired, despite his many letters of application.

Ken left the mine for a job as a warder at Broken Hill jail. On one occasion when he had to escort a prisoner to Orange, he kept going to Sydney and made a personal appeal for a job to the president of the Board of Fire Commissioners. He was given the opportunity to become a temporary fourth class fireman, and from this starting point he built a career in the NSW Fire Brigade.

He transferred to the Newcastle suburb of Cooks Hill in 1941, beginning his long association with the city. In later years he worked mostly from Waratah and Tighes Hill stations.

Ken was injured at work while fighting a fire in 1947. A two-storey warehouse on the corner of King and National Park Streets, Newcastle, caught fire at about 3am on August 30. The upper storey was occupied by W.E. Bramble and Sons, and was full of furniture. The ground floor was home to a wholesale distributor and a quantity of guns and ammunition were in the building. Also destroyed were two trucks and a petrol bowser and it was later considered fortunate that the adjoining boxing stadium was not also destroyed. Whilst Ken was fighting the fire a brick wall fell on him, knocking him unconscious. He spent three months off work, recovering. On his return to work he was called to a fire at the Mater Hospital at Waratah, and he wrote that he was terrified by the flames because of his previous experience. It was only the fact that his superior officer forced him to face his fear and the flames that kept him from fleeing, and from quitting the fire brigade.

Another time he lost his axe while fighting a fire aboard the ship Pan Gothia in 1944. In a strange twist, in 1945 Sergeants E. Thomas and A. Hiles of the AIF were fighting in New Guinea and, while searching a Japanese hut found a NSW Fire Brigade axe. The axe was brought home and Ken always claimed it was his.

He retired in 1972, aged 60, after 33 years’ service, during which he received the Queens Medal for exemplary fire service.

Ken Magor’s great passion was collecting, and he travelled far and wide in pursuit of elusive items for his extensive collections. He also haunted the offices of the Newcastle Sun and Newcastle Morning Herald, scrounging spare photographs and prevailing on the staff photographers to copy old photos he borrowed from various sources. (Scanners were unknown in those days, of course.) At some point in the 1960s or 1970s the newspapers downsized their libraries, discarding thousands of items including photographic negatives. Ken’s relationship with the staff photographers led to him rescuing a large number of negatives from being dumped, and he kept many of them in his collection until he died.

As Ken approached the end of his life he and his son Barry tried to find long-term homes for his collections. Having found it impossible to transfer the collection to Newcastle Regional Museum, Ken and Barry did their best to disperse it to other organisations with special interests. Many files, photographs and negatives went to the NSW Bus and Coach Association in Sydney (now known as Bus NSW) , and much of the fire brigade material was accepted by the Museum of Fire in Penrith.

We are grateful to Matt Threlkeld and Jacquie Jaeger at Bus NSW for giving us access to their portion of the collection. Unfortunately, even combining the two collections of negatives in our hands and in the care of Bus NSW, it seems the whereabouts of a portion of the collection remains unknown. Also, a number of volumes of Ken’s catalogues can no longer be located. And it appears a plan to name a gallery in the Museum of Fire in Ken’s honour has not come to fruition, as he was led to expect in his lifetime.

After Ken’s death Barry sold much of the remaining material to me – at that time a journalist at The Newcastle Herald with an interest in local history. Some other items from the same collection also came to myself and my wife Sylvia some time later from Ken’s step-daughter Betty Mead and her husband Norman. These photographs led directly to the publication of our books, and changed the course of our lives.

The material we acquired from Ken’s huge collections is divided into sub-collections.

The first sub-collection is the material Ken rescued from The Newcastle Herald. The non-transport “rump” of this mixed bag of about 4000 negatives was placed in some old shoe-boxes and largely ignored for decades until Ken passed away. The collection mainly encompasses the 1930s to the early 1950s, and covers the Great Depression and World War II – periods of time that had been poorly represented in the photographic record of Newcastle until this collection unexpectedly re-emerged from obscurity.

Ken had separated a portion of the ex-newspaper negatives that depicted transport items and placed them with his own indexed collection of negatives, prints and postcards depicting transport-related topics. This collection includes many photographs taken by Ken Magor himself, as well as items he scrounged, swapped and otherwise acquired from innumerable sources over his years of collecting. Ken painstakingly numbered these items and recorded their details in a series of school exercise books.

A third sub-collection is a non-indexed collection of numbered negatives and prints that continue the same theme as the second sub-collection. (Index books evidently once existed for this collection, but have been lost.)

A fourth sub-collection consists mostly of ex-newspaper negatives – almost certainly from the same source as the other material – dating from the 1960s and 1970s.

This material is just a portion of the enormous aggregation of material Ken Magor gathered during his lifetime. He was a collector on an extraordinary scale, and his efforts to preserve items that were otherwise likely to have been discarded or destroyed have proven to be of great value, especially to Newcastle and the Hunter Region.