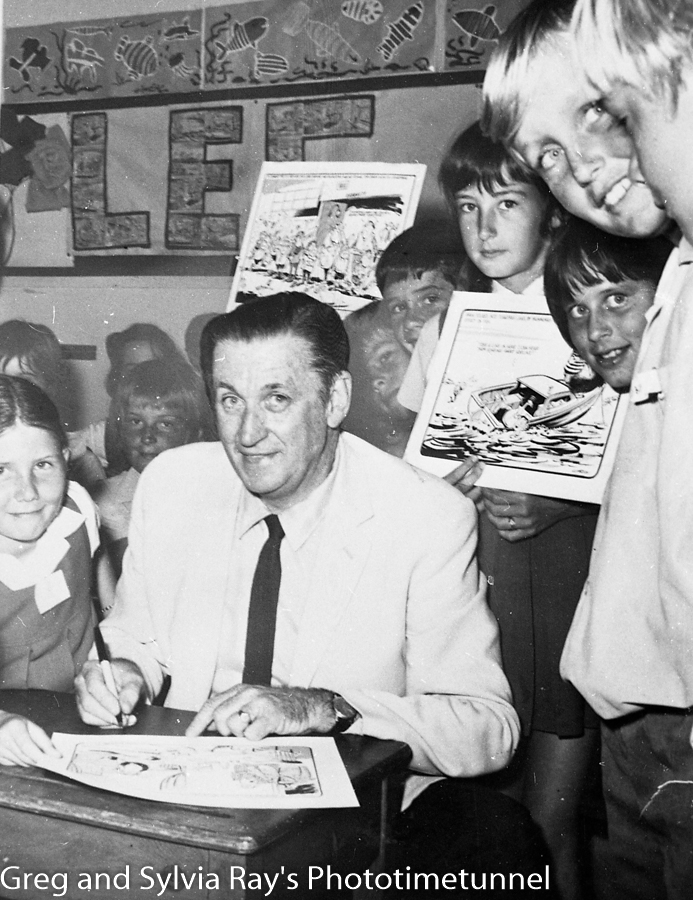 During his long reign as The Newcastle Morning Herald’s resident cartoonist, Les Lumsdon became a household name. His daily drawings of blue-collar families grappling with the issues of the day captured the spirit of a city that liked to laugh – especially at itself.

Born in Abermain in 1912, Les Lumsdon had an early ambition to be a newspaper cartoonist. His first jobs, however, were in retail, first at his parents’ corner store then in the advertising department at the Hustler’s store in Maitland. He married his lifelong wife Vera in 1939.

During World War 2 Les signed up to fight, spending two years in New Guinea where he made pocket money drawing postcards that were highly prized by cashed up American troops.

After the war he trained at East Sydney Technical College and soon found work decorating the covers of girlie magazines of the 1940s and 1950s.

When The Newcastle Morning Herald advertised for a cartoonist, Lumsdon was among 50 applicants, ultimately landing the job that occupied him for the next 30 years and turned him into a household name in the Hunter. He published five slim volumes of his collected cartoons, and these occasionally turn up at second-hand sales.

The black cat, Caspar, that figured in his cartoons was as popular an identity as its creator. When Lumsdon punished the fictional cat for its failure to pick a winner in the Melbourne Cup one year by drawing it being drowned in Newcastle Harbour, the public outcry forced the artist to reincarnate his creation. It is said, perhaps truthfully, that he once emptied 17 pens signing autographs at a Newcastle Show.

Lumsdon retired in August 1977 and he died later that year. He and Vera had no children.

Early days on Bullock Island with Morison and Bearby