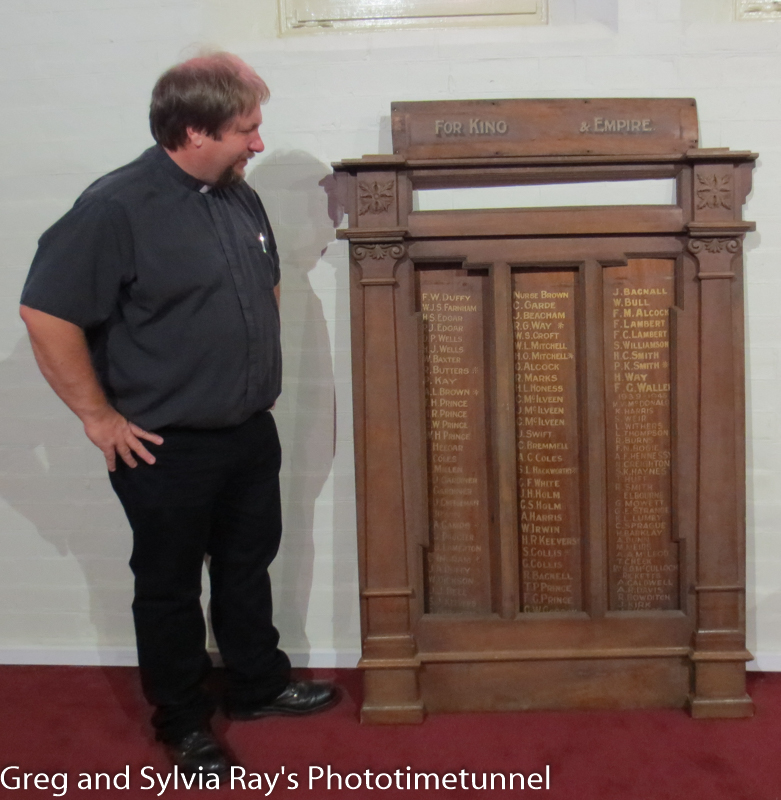 The owner of the board told me he had bought it, years ago, along with some pews and other items from St Mark’s church, Islington. He was told at the time that the church was being remodelled and the items were no longer wanted.

The board, which displays the names of parishioners who served in both world wars, was apparently removed from the wall of the church about 30 years ago.

I contacted the rector of St Mark’s, Father Mark Cooper, who jumped at the chance to have the board returned. Parishioners had told him, he said, of their sorrow and disappointment at the item’s loss, some time before he had arrived at the parish.

When I spoke to lifelong St Mark’s parishioner Dawn Patterson – 81 at the time – she said the honour board had been part of her memory of the church ever since she was a child.

“We were upset when a priest took it down many years ago, and I remember it going into a room we called the undercroft, and then later to a garage where the priest kept his car,” Mrs Patterson said.

Mrs Patterson’s older sister, Betty Whitfield, said the priest had taken the memorial down “about 30 years ago, because he didn’t believe in wars”. “It went into the rafters of a garage,” she said.

Father Cooper said it appeared the board had been sold, along with other church items, when the garage space was needed for other purposes, “We are delighted to have it back,” he said. “It is part of the history of our church and of the lives of our parishioners.”

Time had not been kind to the honour board. It had been pulled apart and some of the names of World War II soldiers (which were painted on the frame of the structure) had been rubbed off.

Fortunately, however, Newcastle history buff and author Ed Tonks had taken a photograph of the honour board in 1985 as part of a national survey of war memorials. His photograph meant the missing names could be reinstated on the memorial, which was originally dedicated in 1916.

I have not checked to see whether the church has followed through with its promise to restore the memorial and replace it in its rightful position.

No doubt every name on the board has an interesting story, but it happens that I have learnt something of the Prince family, whose photos appeared in The Sydney Mail at the time of The Great War. (I have written about the family in our book The Hunter Region in The Great War.)

The proud father of the martial clan was English-born Thomas Philip Prince (1858-1943), a locomotive driver, who understated his age by a decade when he enlisted in March, 1917, and went to France with the 2nd Australian Light Railway Operating Company. Sergeant Thomas Prince endured the rigours of the mud and cold behind the lines at Passchendaele Ridge during fierce fighting in Flanders, winding up being sent back home  with chronic rheumatism.

Eldest son Charles William Prince (1889-1974) was in the United States of America when the war began. He was on his way back to Australia to enlist when he heard that the Australian troops were already in Egypt. He joined Kitchener’s Army in England, as a rifleman in the 4th Battalion, and was wounded in France. He was discharged in August 1919 and came home to Australia to work as a stereotyper for the Women’s Weekly magazine.

Thomas Henry Prince was a civil engineer. He enlisted in South Australia in August 1914 and was involved in the defence of the Suez Canal and landed at Gallipoli on April 25, 1915, as a sapper with the 3rd Field Engineers. He was wounded at Gallipoli and sent to hospital in England. He later trained as an aerial observer, was promoted to lieutenant and sent back to France with the Australian Flying Corps. He was wounded during combat on artillery patrol in September 1918. After the war Thomas Henry published a book, Purple Patches, about his experiences in the engineers. He was married at St John’s Church in Parry Street, Newcastle, in 1927.

William Herbert Prince (1894-1962) was born in Lismore and enlisted in Newcastle in October 1914. Like his brother Thomas he was at the Gallipoli landing on April 25, 1915 as a signaller in the 13th Battalion. He fought on the Somme, at Bullecourt and Messines. He was discharged for medical reasons in May 1918 (seemingly against his will) and re-enlisted in October under the assumed name William Henry Green. The war ended before he could get back to it. He married in Mayfield, Newcastle, in 1932, and worked as a clerk.

Henry Russell Prince (1896-1954) had been a member of the Naval Reserve before World War I and worked for the Public Works Department as a clerk. He enlisted at Newcastle in July 1915 and served with the 45th Battalion in France. Not long after arriving at the front he was awarded the Military Medal for his bravery during a night raid on German trenches near Diependaal on October 15, 1916. Henry survived the 1917 battles of Bullecourt, Messines and Passchendaele and fought throughout the 1918 offensive. He returned to Australia in 1919, married at Cootamundra in 1939 and died from a self-inflicted gunshot wound on April 1, 1954.

Frederick George Prince, (1901-1942) was too young to fight in World War I, but shipped aboard the naval training ship Tingira in September 1916. He was a signaller and served on a number of navy ships, including the Sydney and the Australia. He married at Merewether in 1935.

Frederick was the only one of the family to die in uniform, but that was in World War II. Frederick, a sergeant, succumbed to food poisoning in Darwin in 1942, from a batch of bad tinned beetroot.

Trucks, DUKWs and surfboats were heroes of the flood at Maitland in 1955