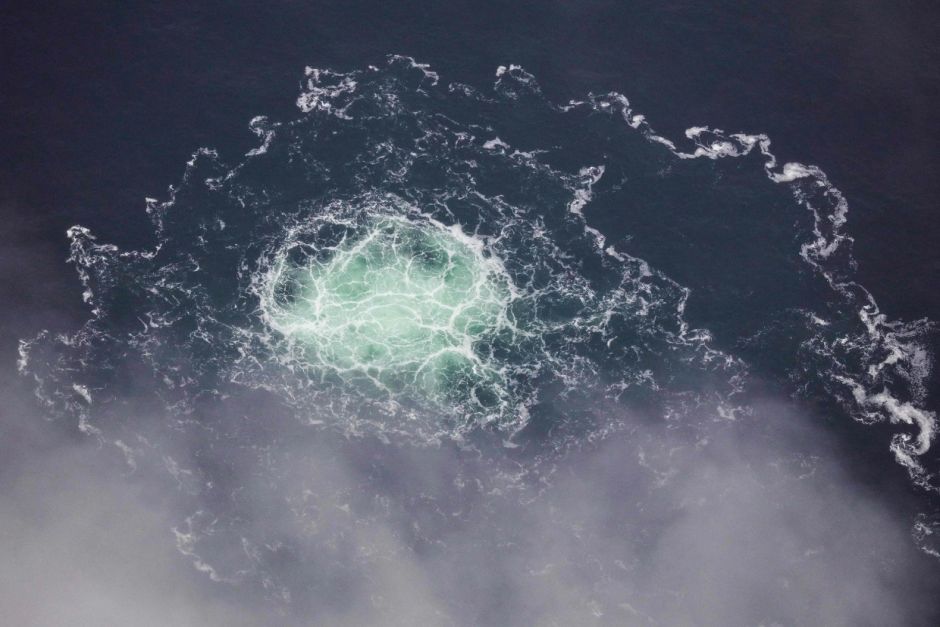 Photo by the Swedish Coastguard service

So the Nordstream pipelines were sabotaged.

One of them, Nordstream 2, was pretty much brand-new, and was built with Russian and European money to take gas from Russia to Germany via the bed of the Baltic Sea, without having to pay transit fees to Ukraine.

America hated Nordstream 2 from the start and tried hard to stop it happening. It argued that Europe was making itself into a potential hostage to possible Russian energy blackmail. It feared that a closer integration of Russia with Europe threatened America’s dominant place in the world.

After much lobbying America got Germany to agree, reluctantly, that it would walk away from Nordstream 2 if Russia invaded Ukraine.

Following years of heated political and military activity between Russia and US-backed Ukraine, the invasion was eventually provoked and the set-piece prepared retaliations against Russia were instantly applied. One of the retaliations was sanctions against Russian gas. This was a dangerous play for Europe since, despite any guarantees of alternative supply from US-favoured sources, the replacement volumes aren’t available and now Europe is having to pay much higher prices, putting its industries and social security at risk as winter looms in 2022-23.

Maybe some in Europe were having second thoughts. Maybe some of them were thinking that, to stop people freezing to death and to avoid having industries close, throwing people out of work just as winter strikes, they should reconsider the Russian gas ban. It would hardly be surprising if such second thoughts were taking place.

The mysterious sabotage of Nordstream 2, at the bottom of a sea that has now become – with the accession of Sweden and Finland into NATO – a US-friendly and Russia-hostile lake, means there is no going back. No second thoughts may now be entertained. Europe will have to navigate winter the best way it can, with super-expensive gas from US-favoured sources.

Meanwhile the inevitable inflation caused by years of money-printing in the world’s biggest economies is finally starting to hit consumer prices, having already inflated shares and property to stratospheric levels.

Throw in Covid, the war and climate change, and the ingredients are there for disaster. And now that gas pipeline is gone, just in case anybody thought of trying to use it in defiance of orders from Empire HQ.

Is anybody happy about this situation?

Maybe people who make weapons. People who sell energy resources and aren’t Russia. People who control the world’s money supply. They might be having a fine time just now, especially since the US Federal Reserve – citing inflation – has started cranking up interest rates.

Since the US dollar is the reserve currency for most of the world as far as big international transactions are concerned, rising US interest rates means a world of pain for countries with a lot of debt and for those which import a lot of stuff. For those countries, the cost of servicing debt and the cost of buying imports – like American weapons and energy from American corporations – has just skyrocketed. Those who can are raising their own interest rates to protect their own currencies but that’s a losing game against the global reserve currency.

Meanwhile, Americans are paying less for imports, which might be some kind of political plus for the Biden administration.

The war has slashed the supply of grain crops on the world market, bringing starvation to vulnerable people. Famine means more social unrest, war and waves of refugees.

Even in the rich countries that don’t face deadly winters the prospects aren’t comfortable. Money-printing drove up real estate prices, people borrowed huge sums to buy shelter and now the rising interest rates and food and energy prices are eating their disposable incomes and threatening the viability of the businesses that employ them.

Banks must be nervous. If too many buyers default and if property prices fall too far then their balance sheets suffer and the weaker among them start to totter. What happens then? Another bail-out, just like the one that was prompted by the GFC in 2007?

Not likely. Governments are drowning in debt, now costing more to service, and they won’t want to take on more. Besides, this possibility may already have been planned for. Most developed countries have signed into law new financial regulations that pave the way for “bail-ins” instead of bail-outs. Bail-ins shift the burden of broken banks onto shareholders and creditors. Significantly, creditors may very well include depositors, who may find themselves holding government guarantees of uncertain value, and/or shares in reconstructed versions of the banks that sank with their money.

It’s interesting, if futile, to speculate that none of this had to happen, or at least not quite this way. Things are this way because those in charge of the global empire of money chose to make them this way.

And there is no going back.

The mysterious Nordstream 2 pipeline sabotage stands as a good metaphor for that fact and all it implies.

Sorry, did I just hear you ask who I think blew up the pipeline? Well gosh, some of the mainstream media were quick to blame the Russians. Those naughty Russians who, with an economy the size of Texas, are apparently the biggest threat in the world. Who interfere in the elections of other countries. Who are to blame when airliners get shot down. Who make the internet a battleground of misinformation. All their fault.

Just ask yourself that old question again: who benefits?

Then hold on tight. This is going to be a rough ride.

Something beautiful every day