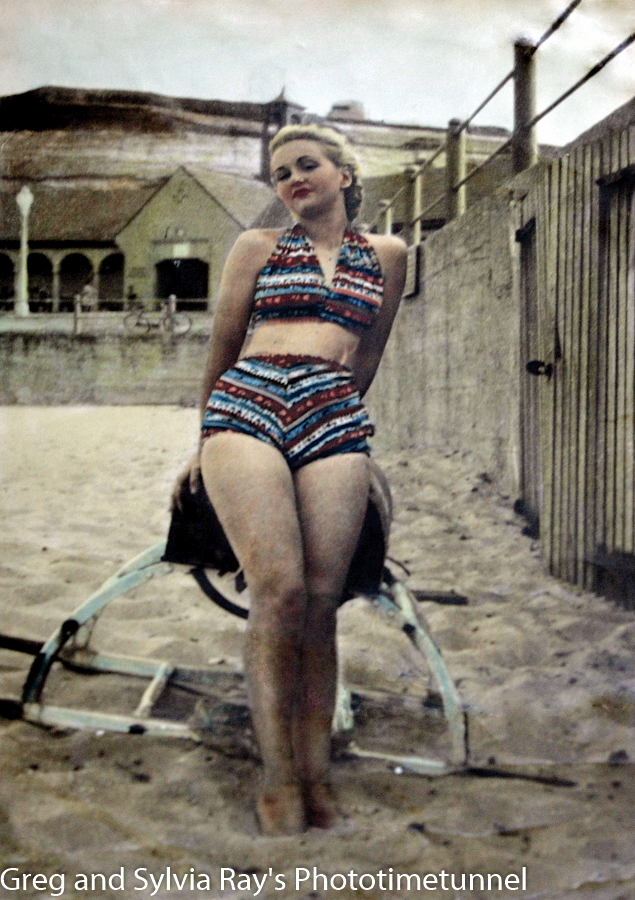 In the dark days of World War 2, when Australia and Newcastle felt threatened by Japanese military might, the population needed something to take its mind off the war. And what better than a beach girl contest?

Actually, the competition (modelled on similar ones that had been held in Sydney throughout the previous decade) was the idea of the Newcastle Commercial Travellers’ Club (an association of travelling salesmen), which had already organised some successful fund-raising ventures – including a billy cart derby – for patriotic charities. The idea was reported in November 1941 by The Newcastle Sun, which followed the progress of the concept to its climax in March 1942.

A 17-year-old employee of Newcastle’s Oxford Hotel (now the Lucky Country) was urged by her boss to enter the competition. Betty Thompson was a buxom blonde beauty, but didn’t think her parents would appreciate her taking part in such a frivolous and sexy contest. Betty entered, but took the precaution of using the assumed name “Bobbie”.

The competition was divided into two sections. In one section – the “popular beach girl” division – the winner was to be the girl who raised the largest sum of money. The other section – the “beach beauty” division – was to be judged on stage in Newcastle City Hall on the night of March 26. All 75 contestants in both categories would form a “grand victory parade” and entertainment was to be provided by a musical comedy revue featuring comedienne Elsa Stenning.

The night was a huge success, according to reports. So many people wanted to attend that the crowd overflowed the city hall and according to a report in the next day’s Newcastle Morning Herald, police had to be called “to help control the crowd which attempted to storm the hall” to witness the final. Miss Joan Orchard won the popular beach girl section, single-handedly raising more than £500. Altogether, contestants raised more than £4000, making the event one of the most spectacularly successful fund-raising events Newcastle had seen. The money went to the Red Cross and other charities.

As winner of the beach beauty section, “Bobbie” Thompson could no longer keep her involvement in the contest a secret from her parents, but apparently they didn’t object too strongly. The win brought the youngster many admirers who flocked to see her at a handful of public appearances. As part of her victory, she was required to be live on stage at the Theatre Royal in Hunter Street, Newcastle, every night for a week following the big final.

Not long after, the family moved to Sydney, where I found Betty many years later. The former Miss Thompson – who had become Mrs Deller – told me she spent a short time dancing at the famous Tivoli before becoming a beautician.

Betty said her win had been very exciting. She kept the sash and cup she won, as well as a number of fan letters from infatuated Novocastrian boys. Betty has since passed away.

The beach girl contest remained a feature of Newcastle life for many years.