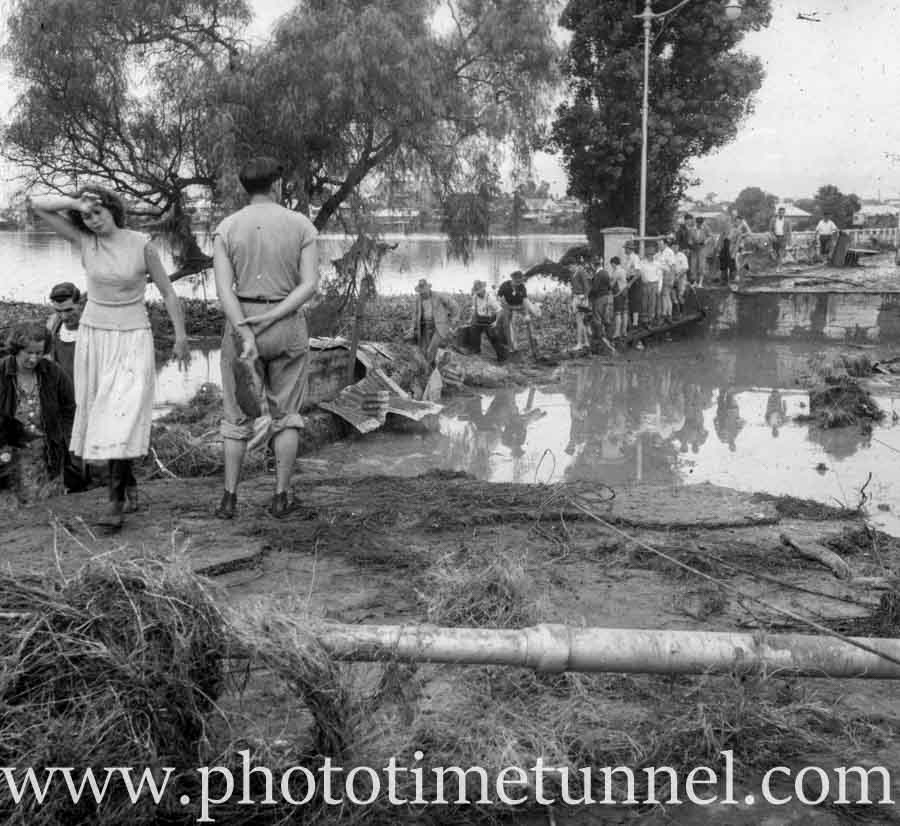 At the Long Bridge after the flood.

When dozens of witnesses saw Stan and Alma Chalmers swept, with two companions, into a boiling whirlpool of debris-filled floodwater they all agreed there was no way they could have survived.

The couple was caught up in Maitland’s extraordinarily destructive flood in 1955. They had climbed onto the roof of their house in Mount Pleasant Street, but the house was picked up by the raging torrent and smashed bodily into the Long Bridge. Those on the roof vanished into a vortex of filthy water as horrified watchers looked on.

Death notices duly appeared in the Sunday newspaper, but they were premature. The couple survived and Alma Chalmers – seven months pregnant at the time – gave birth two months later to a healthy baby girl. I interviewed Stan and Alma for The Newcastle Herald in 2005.

The Chalmers family had bought a block of land in Maitland’s Mount Pleasant Street because they thought it would be safer from floods than their old home in Smith Street, which was repeatedly flooded between 1949 and 1953. Stan Chalmers was a builder, and he made sure his new house was built a metre above its foundations.

On the morning of the flood – as the water level in the Hunter River rose – the family got a phone call from friends in nearby Telarah, offering to mind the Chalmers’ children, just in case. Stan took up the offer, even though the water wasn’t yet very deep around the house. While he was taking the children, the other residents of Mount Pleasant Street were hardly panicking, despite the dire warnings.

Alma went to some neighbours for a cup of tea but before she’d had a sip she heard three muffled explosions coming from the direction of the levee at Oakhampton, followed by the roaring noise of rushing water. “That’s when I knew we were going to be in trouble and that’s when I decided to go home,” she said.

The extra weight of her unborn baby

Neighbour Johnny Mitchell and his grandfather, Joe Bowen, were heading to their own home when the rush of the water became too strong for the old man to walk. They came into Alma’s house where they were soon joined by Stan, returning from Telarah via Sempill Street. Stan started packing up furniture and belongings as high off the floor as he could, but he was barely finished before the rapidly rising water reached the windows. Thinking fast, the group clambered out the window and swung up onto the tiled roof where they clustered on the ridge capping with their arms hooked together. Tired and struggling with the extra weight of her unborn baby, Alma had to be pushed and pulled while nearby neighbours shouted at her to take care not to harm the child.

“We were sitting on the roof when we heard the sound of a helicopter and we all thought it would come and save us,” Stan said. They could see the aircraft buzzing around down near the railway station, but at one point they saw a tremendous blue flash light up the sky and watched as the helicopter plummeted out of control.

Around them other houses were breaking up under the force of the water and washing away. Still, they hoped theirs might withstand the flood. The water kept rising until it came right over the gutters. “Then the whole house gave a bit of a shake and just took off, like a boat being launched,” Stan recalled. For a little while the electrical wires at the front of the house acted like mooring cables and the house swung around in a loop before the wires gave way and the house careered downstream.

“We hit Allan Peak’s house and smashed a corner off it. I saw furniture tumbling into the water. Then we bounced across and hit the tree that Allan and his grandfather and Kevin Ellicott were in and that’s when they climbed on the roof with us. We were still up at the top but they stayed down close to the gutter line.” When the house hit the Long Bridge, the three on the lower part of the roof were able to make a grab for the handrails, but the four at the top had no chance. “The roof collapsed inward, the house disintegrated and we were all sucked into this maelstrom under the bridge.”

I saw the faces of my three children

Stan said he was aware of very little as he was dragged by the current under the bridge. “I remember things hitting into me. I came to the surface and saw a poplar tree which I tried to grab, but I had no hope and next I knew I came up again on the other side of the bridge. At first I thought I was the only one who made it and I was yelling out. Then I saw Alma a long way ahead of me.” Alma said she distinctly remembered, as she was sucked under the water, seeing the faces of her three children. “That’s when I told myself I wasn’t going to drown. When I came to the surface I heard Stan calling out.”

As it happened, all four people made it to the other side of the bridge and they tried to stay close together on their downstream journey. Alma got very tired of trying to stay afloat and when Stan found the wooden remains of a window frame he helped his wife straddle it to keep above the water. “Old Pa Bowen found a door that he climbed onto, so he was going along pretty well,” Stan said.

It didn’t take long before the four reached the railway embankment where a fearful standing wave gave them another churn before spitting them out in the direction of Kurri Kurri. Her encounter with this wave left Alma with bad cuts on her legs, the only injuries any of the group received in the entire episode. “After the rail embankment the main stream was heading to East Maitland but somehow we floated into this area of quieter water that steadily pushed us towards Testers Hollow,” Stan said. “There was everything you could imagine in that water. Cows, horses, sheep, pigs. Every bit of flotsam had some kind of creature clinging to it. I had spiders on my head and when a big lizard tried to climb on too I nearly had a heart attack.” Alma said she caught a glimpse of the clock on St Mary’s Church as they drifted past and the time was 2.30pm.

Their journey ended when Stan, Alma and Johnny hit a little island with a hayshed on it and they managed to find shelter there. Stan struck off again to find Joe Bowen. He found him still clinging to his precious door with “a death-grip”, alive and well but in shock. Stan put him on another little island then, seeing some people moving around, went for help. When she finally got clear of the water, Alma shook out her long hair and sent lizards and bugs flying in all directions. Soon a boat came from a nearby farm and took them all to safety.

“The farmer and his wife – Mr and Mrs Hawkins – had beds ready for all of us and coppers of water boiling for us to wash,” Alma said. “And when she put me to bed we could feel my baby still moving inside me, so we knew it was all right.” But the farmer’s wife was worried Alma’s legs might turn septic from the filthy water, so next morning she sent Stan and Alma by boat to East Greta Junction where they were lent a car to drive to Maitland Hospital. “When we turned up at the hospital in this big borrowed Ford Customline everybody’s jaws nearly hit the ground. Everybody thought we were dead,” said Stan.

Indeed, neighbour Allan Peak, rescued by a surf boat from the bridge earlier that day, had reported them dead, not believing anybody could have survived the churning mess of water at the Long Bridge. “I never cried so much or saw other people cry so much as when they saw us come back from the dead,” Alma said. It was too late for the Sunday newspaper, however, which printed Stan and Alma’s names among those drowned, shocking friends and relatives across the country. Once out of hospital, Stan, Alma and their children moved in with their friends at Telarah who kindly sheltered them for many months until they were able to rebuild.

“I had two pounds in my pocket that I carried through the water and I used that as a deposit on a block of land at Telarah,” Stan said. The Chalmers were given 10 pounds compensation for the loss of their house and land, on which they still owed nearly 3000 pounds. “We still had to pay back every penny and all we could do was borrow more to build again. We had nothing left. Carpets and furniture we had were all being paid off at 10 shillings a week and the shop wouldn’t let us off paying it. They’d lost money too, they said.”

It left a bitter taste in their mouths when they saw people whose homes were unaffected by the floods queuing for relief assistance, but they got a lot of help from a scout troop in Sydney which wrote to them offering to buy them some kitchen furniture. “We had lost everything,” Alma said. Almost everything. A few months after their nightmare ride down the river their farmer’s wife friend Mrs Hawkins arrived at their door with a parcel. In one of her paddocks she’d found a package that had Alma’s name on it. It was a bundle of love letters that Stan had written to Alma during his time in the Navy during World War 2. “I wasn’t game to undo the ribbon that held them in case they fell apart, but it was a lovely thing for her to bring them to me. I’ve got them still, in my chest of treasures.”