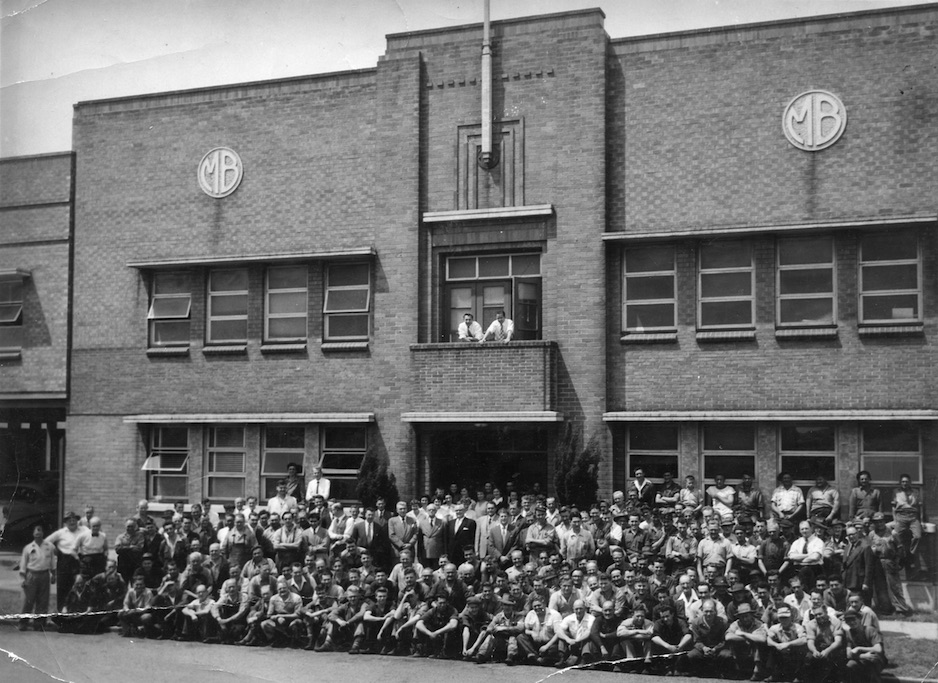 Morison and Bearby staff photo circa 1956

In 1873 Robert Morison, James Morison and Edwin Bearby bought the iron and brass foundry business of John Howdon and Son at Bullock Island (Carrington). The firm grew and thrived on port-related work, soon becoming one of the biggest and most important businesses of its type in the region.
Mr J. Saxby, who started at the factory when he was 13 and when the elder founders of the firm were still a daily presence, wrote his recollections for posterity. I have transcribed his document from longhand.

“In those days we had no blueprints. When we got a job off the boats we had to use the old castings for a pattern and we were handed the measurements on a slip of paper. Jim Cowan looked after the horses, whose names were Darky and Dolly. All carting was done by horse and dray.
“Often caught fish when the tide came up to the boiler shop about two feet deep. This was later filled with dredged sand. Hetton pit was close, and miners passed our works on a small track about two feet wide.

“Boilermakers had little shelter and often worked in the open both summer and winter. The brass shop was very small and low, about 20 feet square with the furnace in the open. The Scotman family (Bill and three sons) handled all the castings and all big castings were dressed in the open. The foundry had a low roof and all lifting was done with hand cranes.
“There was a rolling mill where Mr McDonald and his brothers made scrap metal into billets and made horseshoe iron, also rollers for the foundry.
“We had a wonderful whistle to let us know when to start work and when to knock off. It was an old pot of bell metal and they used to hit it with a piece of iron.
“Mr Bearby would often take his white coat off and work alongside his employees. You could always tell when he was about by his cigars. Arthur Bearby was foreman of the pattern shop. George Jenkins was the coppersmith and his shop was where the old iron rack used to be.
“Billy Mounter was the foreman boilermaker but sad to say he met with an accident at the works which caused his death, then after Mr Mounter came that grand old man Harry Webb, a brother-in-law of Mr Morison. E. Bearby Jnr became foreman of the moulding shop after the death of his father. The moulders had a strike in 1916 and it lasted 3½ months, the first strike ever known at the works and all for one shilling a day rise but they had to go back to work the same they came out for.

“Robert Miller was foreman of the engineering department and a grand and wonderful tradesman. Robert Morison always came to work in a sulky and pony. Mr Bearby Snr came to work on his grey horse. Mr Jones rode his horse to work for a few years; he was one of the Carrington aldermen (Carrington was then still known mostly as Bullock Island).
“The foundry used to get flooded in heavy rain and the moulders had to go home until all dried out.
“Dave Morison used to fire up the upright boilers to drive the fan for the furnaces. We had a brick stove for drying the cores and moulds, we had a carriage on rails and we had to pinch-bar it in and out from the crane. The pig iron we used those days was the best English cherry and Lithgow pig was also good. Men had to come early in the mornings before the sun came out to break it up. If you tried to break the iron when the sun was out it would bend. It was the best of iron which we don’t get now.

“We used to work 7.30am to 3pm in the winter months and in the summer months, 6am to 4pm. We had breakfast and dinner breaks and worked 6 days a week. Apprentices had to work six years before they finished their time and we had to start on 6 shillings a week for the first year. We used to make coal wagons. Billy Gilpin was head of the wagon builders. Where the brass shop is at present was the blacksmiths shop. There was five fires in all and two steam hammers. Jack Gellaty was leading blacksmith.”

For more information about Morison and Bearby, click here for the University of Newcastle’s Cultural Collection.