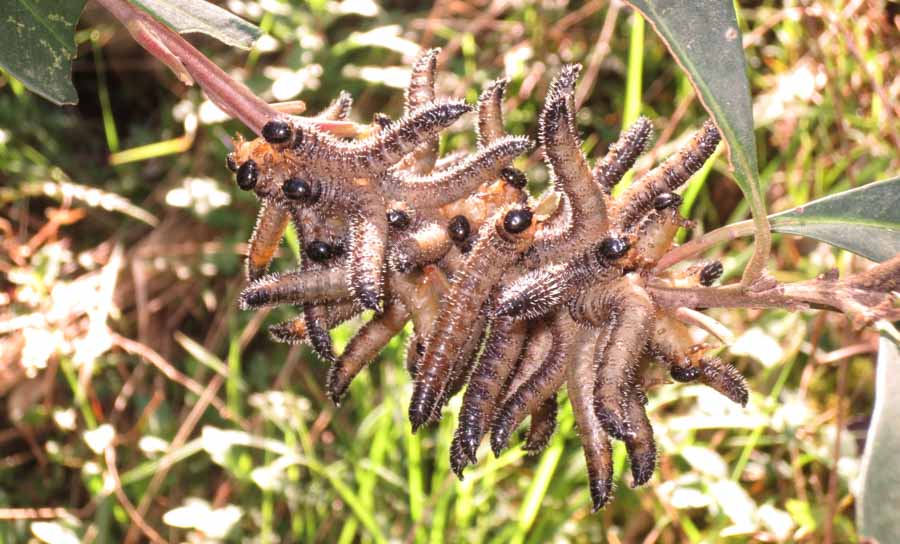 A clump of aggravated sawfly larvae.

This week both my wife and son reported that they had discovered, separately, some nasty surprises in the bush where we often walk. One was a “plant from hell” which, according to my wife, was perhaps the most dangerous-looking plant she had ever seen. The other was some caterpillars my son saw clumping on the branches of water gums.

Turns out the caterpillars looked a lot worse than they really are, and in fact they aren’t even really caterpillars, as such. But as for that plant, it turns out my wife’s instinct was sound.

The bush we are talking about is near Gloucester, NSW, and although it’s mostly benign it does contain some known nasties. Inch-long bull-ants, for example, are sometimes seen and occasionally felt. I’ve heard many rumours of brown snakes, but so far none of us has seen one. (Plenty of red-belly blacks, diamond pythons and various green tree snakes though). Spiders are always around, and some of them look terrifying, though they are themselves prey to an extraordinary variety of wasps, which love to catch and paralyse spiders as food for their young.

Which brings us back to the “caterpillars” my son reported with so much horror. What horrified him about these critters was the fact that hundreds of them were packed together on small branches of the trees, and when he moved near them they reared up, en masse, in a very creepy and apparently threatening way.

It turns out that these little monsters are the larvae of sawflies (named for the serrated appendage of the female, which cuts a slit in the bark of the trees in which she lays her eggs). The grubs, which some people apparently call “spitfires”, cluster together for protection and can ooze some irritating liquid from their tail ends if you bother them enough. All-in-all they are pretty harmless though, and I gather that they themselves fall prey in huge numbers to parasitic wasps. To learn more about sawflies, click here.

As for nasty plants, well, I’m used to them. Or so I thought. After all, the bush is full of stinging nettles, which we learn to avoid. Some people eat them – after boiling or baking – and they are supposed to be very good for you. But they don’t feel too good on your bare skin when you are walking to the river for a swim. The irritating burning sensation is troubling for a couple of hours.

Other plants look nasty, but aren’t much of a big deal, like the forest nightshade, which looks quite nightmarish when you get up close to it.

We also have our share of specimens of stinging trees, which are a few notches above the plain old stinging nettle in terms of the discomfort they cause and the duration of pain they inflict. The leaves of these trees are covered in very fine silica needles that break off on contact and inject nasty painful chemicals.

The tree from hell that Sylvia spotted turned out to be a “shiny-leafed stinger”, or “mulberry leaf stinger” (Dendrocnide photinophylla), the pain of which stinging tree researcher Dr Marina Hurley described as like “being stung by 30 wasps all at once”.

It could have been worse. The nastiest of the stinging trees is the Gympie stinger, or “suicide plant” – so named because the pain caused by contact with the toxic needles that cover every part of it may cause some to contemplate ending their lives. It is said that the pain delivered by this plant is the worst plant-related agony of its type to be found on Earth.

Apparently, the pain is extremely severe for a couple of hours after contact, but stays very bad for days before settling down to being no more than a bit awful for maybe a year or so, with the affected spot remaining tender to touch and highly sensitive to cold water. Cutting the tree down sends stuff into the air which, if you breathe it in, can affect you in a variety of bad ways, the least of which seems to be nosebleed. And let’s hope you don’t get the big weeping welts that some people suffer.

Murdoch media turned me into a royal-watcher