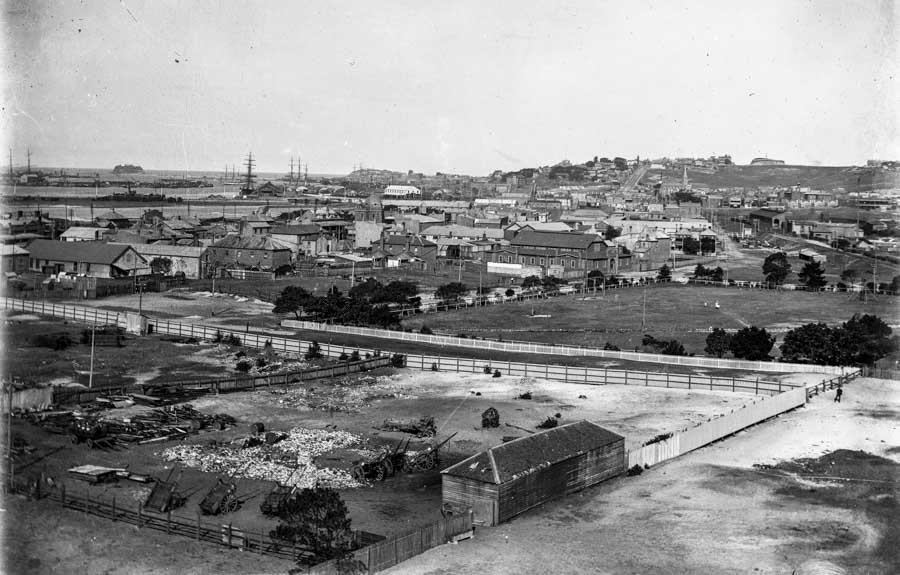 Our friend Bruce had been to a garage sale one Saturday morning where he found, sitting on a nogging in the frame of a neglected shed, a little cardboard box of glass plate negatives. They didn’t cost him much and that same night he passed them into our hands as a gift, asking only that we give him copies of whatever images we scanned from them.

When I first scanned them I could see that at least a few were from the Newcastle area, but the others seemed mysterious to me. One was clearly taken on a Pacific Island, which suggested that the contents may have come from various places. My early thoughts were that they were view of towns and villages around Australia.

A little later (while I was mowing the lawn, in fact) I was struck by the thought that perhaps some of these images might join together into a panorama. This proved in fact to be the case, and I found nine that more-or-less joined end-to-end to give a panorama of Newcastle, NSW, and its inner suburbs.

Careful study revealed they had been taken (not necessarily all on the same day, oddly enough) from the top of a former brewery building in Wood Street, Newcastle West. The building is now part of Hamilton TAFE (college of technical and further education).

From still closer study of the images, I got the impression that they may have been created around the time of the Australian Agricultural Company’s decision to subdivide some of its coal-mining holdings for residential purposes.

The first image was easy to identify, since it contained a number of easily recognisable Newcastle landmarks. In the background are Nobbys headland and The Obelisk. Also visible are the domes on the Marcus Clark store and Bank Corner, the second version of the David Cohen warehouse (which was rebuilt after the disastrous fire of 1908), St Andrews church, Cooks Hill School on Union Street, the Bullock Island bridge, the Drill Hall (built in 1910) and Birdwood Park.

The third plate looks across National Park to The Junction, with the potteries, The Junction Demonstration School and churches.

The fourth plate looks across National Park towards Merewether. Among the distant landmarks are St Augustine’s Church and the grand Hillcrest residence.

Among the distant landmarks that can be seen in the fifth plate are the racecourse and the church on the corner of Glebe and Brunker Roads, Adamstown.

Landmarks visible in the sixth plate, which takes in some of Hamilton and Broadmeadow, include the spire of St Stephen’s Church, Hamilton Boys’ School, Tudor Street, Scots Kirk, the Showground and grandstand, Dick Engineering, interesting houses at 36 and 38 Gordon Avenue and Mount Sugarloaf in the distant background.

In the seventh plate, looking towards Hamilton, can be seen Parry Street (running from bottom right), Denison Street with its stumpy little trees, Tudor Street beyond Denison Street and almost parallel, and the Hamilton mill.

The eighth plate looks towards Wickham and beyond. Among the visible landmarks are Hamilton Methodist Church, Tighes Hill and the coal train roundhouse in the right background and Dean’s pottery works to the left of the roundhouse.

Plate nine, which looks across Wickham to Carrington, shows the Store building, Wickham School, the hydraulic pumphouse and Hetton Colliery.

Below is the panorama, formed by joining the the images end-to-end. This was refined and then printed at a very large size (about 4 metres) and displayed along a wall at Newcastle Regional Museum. Later, in November 2021, our wish to have the enormous image displayed in the round was achieved, thanks to the Postcards and Panoramas exhibition at Newcastle Regional Library (see video link at the foot of this post).

In mid-2022 we located the image below. It’s scanned from a 35mm negative, which was made from a print in 1971 by the late press photographer Milton Merrilees. This image completes the panorama – except for a tiny sliver. We are still hoping the original negative will one day be found.

To view a short video of the panorama as it appeared in the postcards and panoramas exhibition at Newcastle Regional Library, click here.