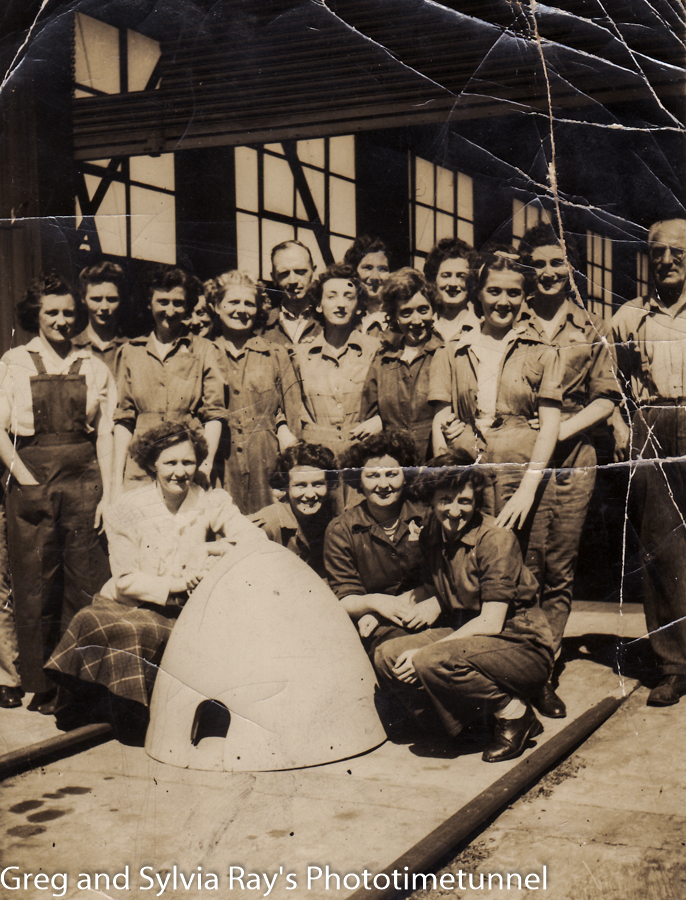 Mollie Clewett  was 21 years old and had only been married a year on November 29, 1943 when she started working as a machinist at Newcastle’s Lysaghts plant.

It was wartime, and ever since the Japanese submarine bombardment of Newcastle, people in the city were acutely conscious of how much was at stake. Thousands of Hunter men were away fighting, creating a shortage of labour for vital war industries and opening opportunities for young women like Mollie to work in jobs that would have been closed to them just a few years before.

Mollie’s husband, Dick, already worked at Lysaghts as a fitter and turner in the Owen gun shop, (making the Australian-designed Owen submachine gun) and Mollie applied for a job at the newly erected “spinner shop”. This plant was set up in 1943 to make protective streamlined cowlings for aircraft propeller hubs. These were made of spun aluminium and had to be manufactured to extremely fine tolerances. Making spinners was a brand-new enterprise for Newcastle and Mollie recalled that she and her colleagues were taught by having to recondition 60 English-made spinners for De Havilland Mosquito bombers.

The work continued as a combination of local manufacture and assembly of imported parts and by the time the plant wound up it had made about 900 spinners for Mosquitoes, Beauforts and Lincoln aircraft.

According to the book Lysaght Venture: “The smaller spinner for the Beaufort bomber was finally made entirely from parts manufactured in Australia, mainly in Newcastle, by Henry Lane Pty Ltd.”

The girls had to learn every job in the shop so that absences didn’t slow the production line. “We drilled and riveted and did the whole thing,” Mollie told me when I interviewed her in 2011.

Mollie’s usual job was assembling and fitting the baseplate that went inside the spinner and joined it to the aircraft propeller. “I had to put special locks all around the edges, then the baseplate was put up on a holder, as if it was on the plane. Then I’d have to push the spinner on and tap it in place with a rubber hammer. Then it went into the concentricity room where other girls would make sure it was perfectly balanced. After that the spinners were spraypainted and the job was finished”

All the women wore scarves to keep their hair out of the machines, but Mollie recalled one incident where a workmate got her hair caught in a drill chuck. “We shut down the machine in time but it nearly scalped her,” she said.

Mollie and her workmates remembered the day the war ended. “We climbed on the two engines at the works. Their names were Kathleen and Marjorie. We were allowed to blast their whistles then the boss gave us the afternoon off and we went to town to dance and celebrate.”

Mollie said the pay in the industries was very good. At the time she and Dick (who had moved from Goulburn in 1942) were renting a couple of rooms in a woman’s house. She liked the work and was sorry when it finished in October 1945.