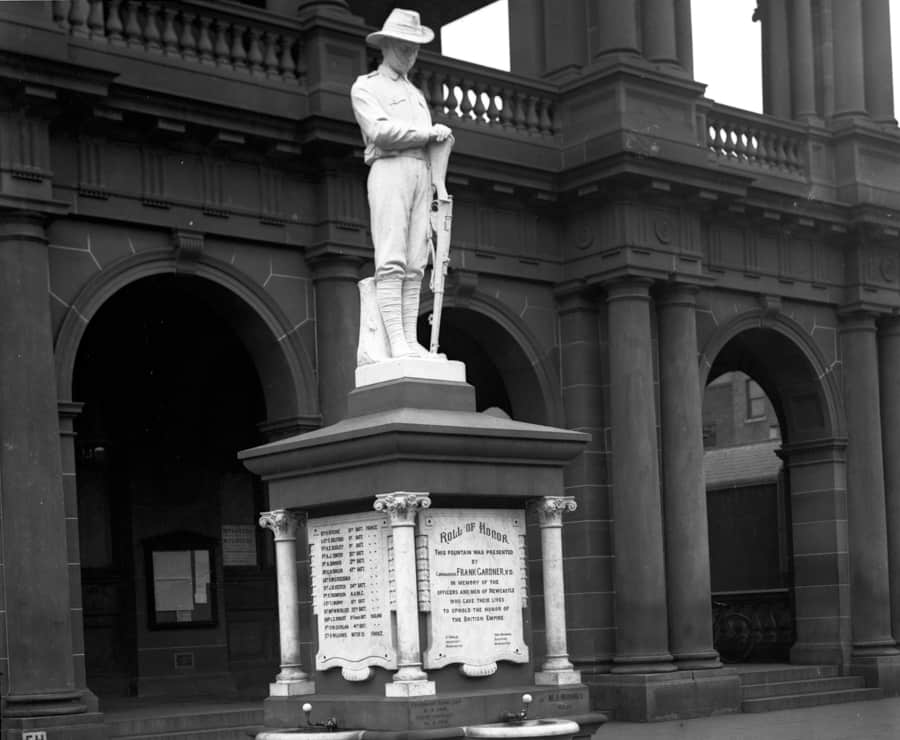 In September, 1916, as details of the horrific slaughter of Australian troops at Fleurbaix/Fromelles on the Western Front were filtering back home, preparations were underway for the unveiling of what is reputed to be Australia’s first Great War soldier statue memorial, outside Newcastle’s post office.
The Newcastle Morning Herald reported on September 11 that:

“The statue for the Gardner Memorial has arrived in Newcastle from Italy, and is at present at Brown’s Monumental Works, Newcastle West, where it will remain until the unveiling ceremony takes place. Mr Frank Gardner inspected the statue on Saturday, and expressed himself well satisfied with the workmanship. Mr Gardner has given further proof of his admiration for the Newcastle soldiers by donating to the Voluntary Workers’ Association two allotments of land at Dudley, on which to erect cottages for men who have returned disabled”.

In the 21st century the donor of this fine memorial is perhaps not so well-remembered as he deserves to be. Frank Gardner was one of Newcastle’s most remarkable citizens, a larger-than-life figure in a time when the British Empire ruled much of the world. Born in England in 1841, Gardner went to sea with the Royal Navy when he was just 14, serving at the Crimean War, the Opium War in China. After leaving the navy he fought for the Confederate Army in the American Civil War, ran guns for the South and eventually came to Australia around the 1850s as second mate on the clipper Lightning.

By 1862 Frank Gardner was in Newcastle, where he set up a bonded store which promptly burned to the ground – uninsured. His next store also burned down, perhaps prompting his involvement in re-organising and equipping Newcastle’s infant fire brigade. Gardner made money in the insurance and auction business and was from the start an extremely generous benefactor to a bewildering array of charities and causes ranging from sporting and musical organisations to homes for sailors and, particularly, Newcastle Christ Church Cathedral.
He retained a passionate interest in the military and remained active in the Naval Reserve. His Great War bequests were especially enormous. Frank Gardner paid for the famous Warriors Chapel altar in the cathedral and he supplied £250 to Newcastle Council in 1915 for the creation of a memorial to the fallen in the “Great War” then raging.
This donation was intended to be anonymous. But on July 26, 1915, The Herald reported that the identity of the donor had been revealed at the insistence of the council, which wrote: “The council very highly appreciates your generous action to the city you have been so long and so intimately connected with, and this feeling is intensified by the fact that your gift will tend to remind the citizens of those who may fall doing their duty upholding the British Empire in the present disastrous war”.

The foundation stone was laid by Mayor Kilgour in early April 1916, less than a year after the landing at Gallipoli, and the memorial was unveiled later that year on September 16. On the first anniversary of the Anzac landing on April 25, 1916, marchers led by men wounded at Gallipoli saluted the incomplete pedestal on their way to church services.
The Herald reported the ceremony that accompanied the first Anzac Day commemoration in Newcastle:

From early morning crowds thronged into the city from the suburbs and from the adjacent centres. Business was practically suspended during the forenoon, for major attention was devoted to the observances arranged by the committee, headed by the Mayor, and the Returned Soldiers’ Association. But though crowds thronged the city streets, there was no appearance of carnival, rather was there an appropriate air of quiet reverence, though the tinge of pride in the achievements of the Australians and New Zealanders was not absent.

A great many of the shops and other business places, as well as vehicles, were draped in black and purple, and there was also a free display of bunting, all flying at half-mast, and in which the public offices and the ships in port participated.
The procession was formed up at the junction of Porcher Street and Hunter Street West, and proceeding through the city, was composed of the Naval Band, Naval Contingent, with gun, Returned Soldiers. Veterans, Naval Reserves, 35th Battalion with band, 36th Battalion and band, 16th Infantry Band, and Military Cadets. It was a lengthy procession, and the marching of the sailors and soldiers excited admiration. The returned soldiers were greeted with lusty cheering. which was redoubled in honour of a number not sufficiently recovered to be able to walk, and a couple of whom were blind, who were conveyed in motor cars.

The two battalions – the 35th and 36th – in training at Broadmeadow were also greeted with encouraging cheers. All the various units of both battalions were in the parade. As the procession passed the Gardner memorial to fallen soldiers in front of the post office – (beside which were Alderman M. J. Moroney, Mayor of Newcastle, Commander Frank Gardner, the donor, senior military officers, and relatives of deceased soldiers) – was impressively saluted. As the procession left Hunter-street and proceeded up Watt street, contingents of men fell out, and were marched to their respective churches, whilst the remainder proceeded to the Cathedral. The soldiers attended the memorial services in large numbers, and so did the civilians. After the church services the procession was reformed in Hunter Street, and assembling in the neighbourhood of the Gardner memorial awaited the striking of midday. At that hour a gun was fired from Fort Scratchley, and immediately the band of the 36th Battalion played the National Anthem, all traffic was suspended, and 60 seconds silence was observed.
During the forenoon proceedings a large number of wreaths were placed on the Gardner memorial, over which was spread the Union Jack and the Australian ensign. At the conclusion of the formal commemoration short recruiting speeches were made by Sergeant Melville and Mr D. Watkins, MHR, and a dozen recruits responded to the appeal for men.

By June 1916 the newspaper was able to publish a sketch of the proposed monument, along with details of its construction. It was reported that the monument was designed by Commander Gardner himself, and that the statue – of white marble – was being made in Italy. Such an order during wartime, involving a long sea journey for the finished statue, was surely remarkable in its own right.

The Herald reported the unveiling of the statue:

Midsummer weather prevailed on Saturday afternoon, when an historic series of ceremonies was witnessed in front of the Newcastle Post office building, by a crowd numbering several thousands. In looking at the vast sea of human forms, standing closely packed in the roadway in Bolton and Hunter streets, the impression arose that meteorological warmth was outshone by the warmth of loyalty, for patriotism was the keynote of the occasion.
So soon as the Mayor caused the removal of the flag covering the marble, and the fine memorial was displayed, the Municipal Band gave Boys of the Dardanelles. The returned soldiers advanced to the base of the statue and saluted.

For more information about Frank Gardner, this site is worth visiting: http://indicatorloops.com/gardner.htm

Our book is available here: https://www.phototimetunnel.com/product/book-07-hunter-region-great-war