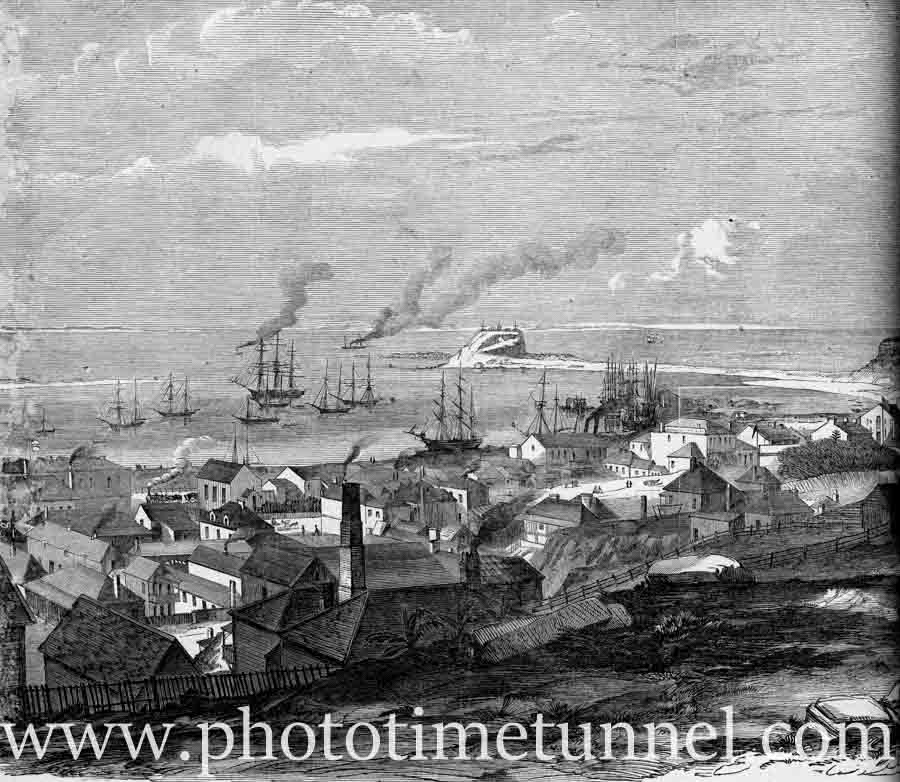 Newcastle in the 1870s, from The Town and Country Journal

Honestly, I had to laugh out loud. What started out as a more-or-less po-faced description in an 1872 newspaper of the fledgling town of Newcastle, NSW, turned into a hilarious slag at the apparent incompetence of the settlement’s council – its municipal “corporation”.

The paper is The Town and Country Journal, dated February 10, 1872. The article features a lovely woodcut of Newcastle, overlooking the harbour and Nobbys, and most of its column-length is occupied by an account of the history of the Australian Agricultural Company, which ran the city’s coal monopoly for the benefit of British shareholders. But after a long-winded ramble through the company’s records, it then gives this delightful description of entering Newcastle from the sea aboard the paddlesteamer Maitland.

The Hunter River enters the ocean about 70 miles North of Sydney, the south bank exhibiting the bedrock of sandstone to the river edge, the widespread alluvial of the river floods being spread out towards the north. The town or city therefore has been erected on the elevated bluff to the southward, and jutting out, projecting into the sea and nearly surrounding it.

Newcastle is perhaps the most airy and the coolest town in the colony. There are few more striking sights in New South Wales than Newcastle from the deck of the Maitland as she rounds Nobbys light at 5 o’clock in the morning, with a full moon sitting behind the rising smoke of the distant town, and full sun rising out of the bosom of the broad Pacific, tipping and colouring the houses, rocks and shipping in the port.

Several hard facts are made patent to several senses

But the writer breaks this enchanting spell, noting that:

Near inspection, however, dispels much of the colour and several hard facts are made patent to several senses.

What a polite way of saying that, up close the town doesn’t look, sound, feel or smell too good!

The Corporation of Newcastle is the oldest Corporation on the Hunter, and almost the oldest in New South Wales; if it were only for the fact of seniority, much might be expected of it. There are several fine corporations in Newcastle. Milthorpe’s for instance is one, but the leading and presiding body – the body municipal – is a glorious Corporation and probably unrivalled in Australia for the ingenuity it displays in discovering how not to do it, and how to do without it.

The blessings the ratepayers of Newcastle enjoy

Seems like the author of these pars didn’t think much of Newcastle’s civic leaders. Why? The writer explains:

To make roads and metal streets for storm water to carry away; to make footpaths that break the legs and endanger the limbs of the people; to construct pitfalls alongside gloomy streets for the reception of strangers; to build walls that fall at periodical intervals across the street; to spend the rates in law; to do at a venture that which is little wanted, and to leave undone at their leisure, that which is much required, and to construct costly works of little use, are some of the blessings the ratepayers of Newcastle enjoy under the government of a Corporation that needs no professional assistance, for its knowledge is intuitive, and its science past finding out.

Fortunately for the citizens of Newcastle in 2019 things have changed. Who today would criticise the modern-day council for “doing at a venture that which is little wanted” or for “leaving undone . . . that which is much required”?

To Morpeth by steamer