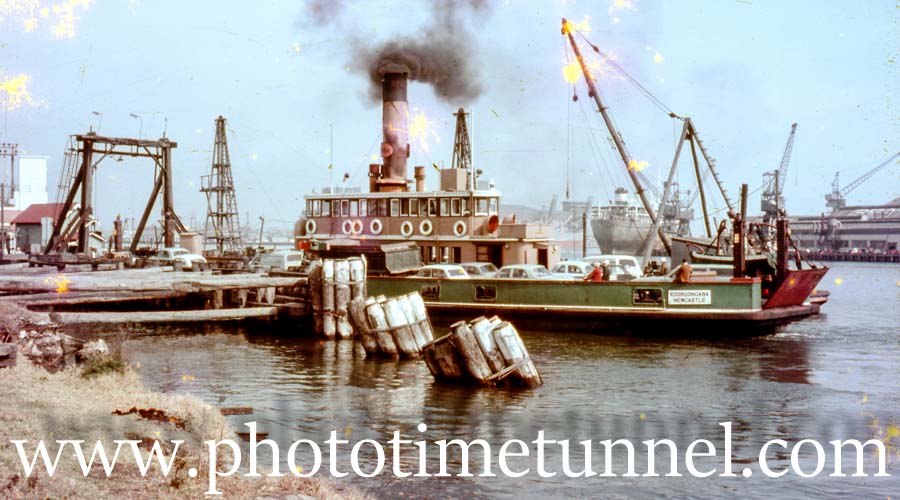 Crossing Newcastle Harbour has for many years been both a challenge for travellers and commuters and an opportunity for the operators of ferries and punts. A great variety of ferries came and went from Newcastle over the decades, with some used chiefly as industrial transport and others available for general passengers.

Vehicular ferries (always known in Newcastle as punts) filled a vital role, and until the advent of Stockton Bridge in 1971, they often had their work cut out keeping up with demand. Among the famous and long-serving punts was the Mildred, the first vessel launched at Newcastle’s Walsh Island dockyard – in 1914 – and named after Mildred Griffith, wife of the dockyard superintendent. The Mildred spent some time working as a Hawkesbury River punt during World War II, was retired in 1945 and sold to private buyers.

The Kooroongaba was another punt built at Walsh Island. It had been working in Sydney but was not needed there after the Harbour Bridge was built. It started operating in Newcastle in 1932 and was the last car ferry built in NSW.

The Lurgurena was a UK-built punt, bought for use on the Derwent River crossing in Tasmania until a bridge was completed there in 1944. The Tasmanian government invited the public to name the vessel when it first arrived, and a cash prize was awarded for the suggestion “Rena”. This seemed fitting, since “Rena” was said to be an Aboriginal word for kangaroo, and Kangaroo was the name of the ferry the new vessel was replacing. The name, however, was already in use on another craft, so the Tasmanians chose “Lurgurena” instead – apparently the female variant of Rena in the same Aboriginal language. When the new Derwent bridge made the vessel redundant, the punt was bought by NSW for the Newcastle to Stockton run, arriving in the city on Christmas Eve, 1945.

The last, and biggest, Newcastle punt was the former Sydney showboat Koondooloo, bought for the run in 1950. An interesting account of the Koondooloo’s journey from Scotland to Australia can be read here:

All the punts were steam-driven, and their operation was notoriously smoky. Delays were also a problem, since by 1970 the service was carrying more than 4000 vehicles a day, on average. Not only that, river silting could disrupt the service, as it did after the 1955 flood, when the punts stopped for three months, forcing motorists to travel to Hexham.

The NSW government was keen to rid itself of the expense of running the punts, and it also wanted to attract new industries to its Kooragang Island land reclamation project. A bridge was the obvious solution. Kooragang had already been linked to Mayfield by the Tourle Street bridge, which opened on February 20, 1965. A northern bridge was the missing link, and the government finished the job with the formal opening of the Stockton bridge on November 1, 1971.

The high-level bridge was a major undertaking. At the time it was the second-longest road bridge in NSW (only Sydney Harbour Bridge was longer) and its 3770 feet required 22,700 cubic yards of concrete and more than 3000 tons of steel. On the day the bridge opened, the smoky old Koondooloo made a farewell trip, passing underneath the bridge that was putting it out of business.

Newcastle’s old punts came to a sad end after the government sold them in November 1971. They were bought by Stuart Allen White of Goldfields Metal Traders. He also bought the old showboat Sydney Queen (formerly the Kalang) and had it towed up to Newcastle to join the Kooroongaba, Lurgurena and Koondooloo, which he reportedly planned to sell in the Philippines.

The US-built wartime tug Polaris (from the Philippines) left Newcastle Harbour with all three boats in tow on New Year’s Day, 1972, with much criticism of the allegedly inadequate hawsers that connected the convoy.

Even with help from two harbour tugs, a string of mishaps bemused spectators. Broken lines were the order of the day, and the Kooroongaba was apparently damaged on rocks on the way out. Last in line, that boat sank suddenly as the convoy approached Crowdy Head in the early hours of January 3. On January 7, Polaris went into Trial Bay and moored the ferries, apparently hoping to get better tow ropes. The weather changed on Sunday, January 9, causing the Koondooloo to snap her moorings and run ashore. At 12:30pm on January 12,  the Sydney Queen broke her moorings and went aground not far from the Koondooloo, and on January 15, the Lurgurena joined the other two on the beach.

Stuart White went bankrupt, set fire to the boats to “deter vandals” and left the district. The ill-fated ferries remained on the beach, attracting crowds of interested tourists. Parts of their skeletons can still be seen in the sand from time to time.

A very comprehensive account of Newcastle’s vehicular ferries – from their earliest days to their sad demise, can be found on Bill Bottomley’s wonderful website. here.

Barrington and Gloucester Tops in 1925