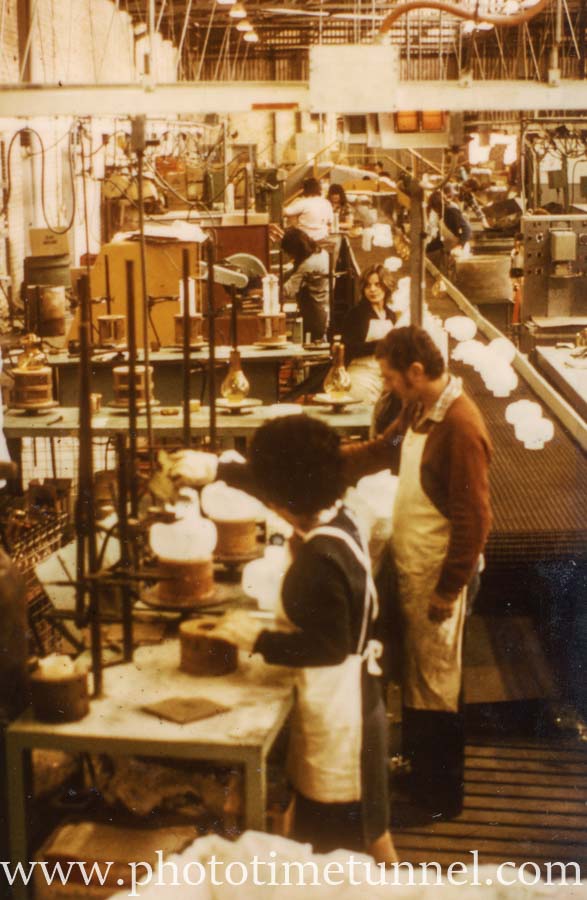 Newcastle’s sadly missed Leonora glassworks was founded by three Czech immigrants – Joe and Henry Vecera and Joe Tvrdik – who came to Australia before World War II as highly qualified glass-workers. When war broke out they were employed at the ELMA lampworks making light globes, radio valves and parts for bomb-sights. After the war they sensed an opportunity and opened their own factory in a two-storey brick former machinery shop on the grounds of the Old Lambton Colliery.
The small factory opened on August 15, 1947 and at first it made mostly tableware, although its first big order was for 100,000 glass chimneys for kerosene refrigerators. On July 3, 1957, the factory was destroyed by fire and the owners quickly relocated to Douglas Street, Wallsend, taking just three weeks to get back into production. In 1960 Leonora was taken over by the multinational firm Philips, and the focus of the business soon became light-fittings.

In the 1970s the factory employed almost 200 people and turned over millions of dollars, exporting products around the world. Competition from cheap-labour countries pressed in on Leonora, however, and Philips walked away just before Christmas 1982.
A handful of employees mounted a brave attempt to start their own small factory in Clyde Street, Hamilton, but despite their enthusiasm and a certain amount of government support their efforts failed after a couple of years.
Former plant manager Ted Miller wrote an article in The Newcastle Herald lamenting the closure:
“No longer will thousands of tourists and schoolchildren view groups of talented young craftsmen wave gobs of molten glass around on the end of steel blowpipes while, with apparent ease, they rotated the pipes with their left hands. It was a picture of smooth motion and manual dexterity worthy of a juggler! Like young bare-chested Vulcans they had plunged the end of their blowpipes into baths of liquid golden glass, and gathered the desired quantity with the same ease as eating honey with chopsticks,” Mr Miller wrote. “The combined effect of all these pipes being held down, out and up with short puffs from the man’s mouth at a judged tempo, was of a muted jazz band in a crazy jam session.
“Leonora’s closure amid the present depressed climate may not attract much attention but the irrevocable finality of this end to a proud chapter of the glass industry in Australia warrants some mark of respect. It takes 10 to 15 years to train a good glassblower but there will be no trainer available in future.”

One of Leonora’s famous glassblowers was Julio Santos, whose artistic creations are highly sought-after. Mr Santos continued to work in glass, decades after Leonora’s demise.

Glassblowing, though perhaps the best-known aspect of Leonora’s work, was only part of the exacting trade. Jim McMahon started at the factory in 1959 at the age of 15 and worked there until it closed and he moved with some former colleagues to the ill-fated Australian Commercial Glassblowers Pty Ltd. Jim was trained as a finisher, responsible for “cracking off” the annealed glass vessels and then grinding away the rough and sharp protrusions on a large horizontally rotating steel wheel bathed in water and carborundum powder.
“I’ve still got the scars on my hands and arms from the job,” Jim said. And as well as those mementoes, he also sees many pieces of glass in homes and businesses that bear the characteristic traces of Leonora style.

The topless lady and the plane crash