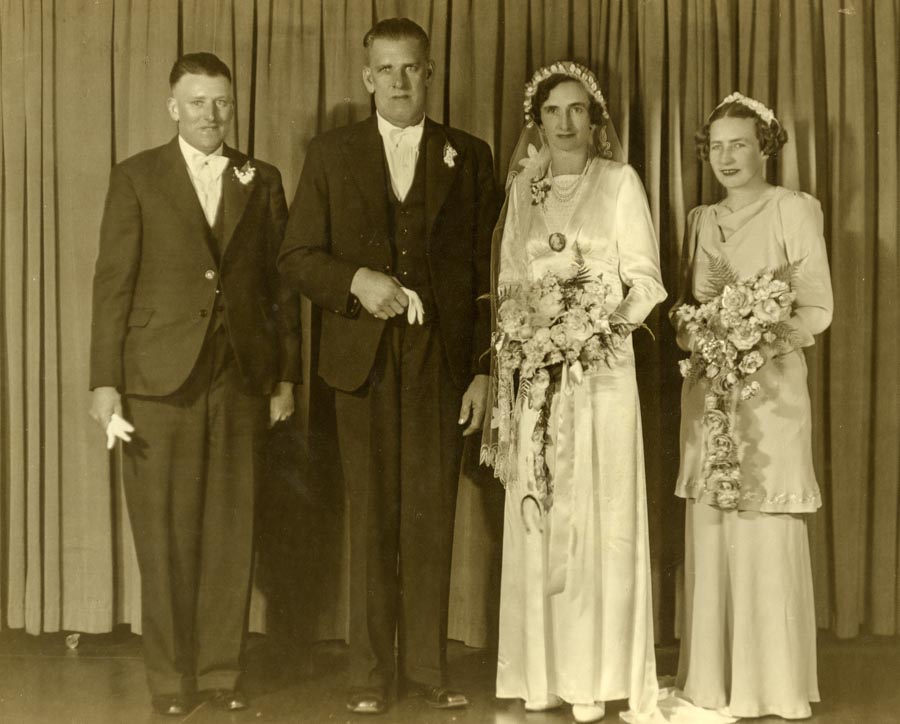 It’s interesting to see how much newspapers have changed in Australia. And interesting too, to reflect on how much is lost when small papers close. From the point of view of historical or family researchers, old newspapers are a tremendous storehouse of information, from important stories to bits of trivia that help flesh out pictures of people in the receding branches of family trees.

While access to many old papers is difficult, Australia’s amazing Trove resource offers much more than many people might imagine, as I discovered this week.

It started when it suddenly occurred to me that I could find out more about the death of my paternal grandmother’s father, George Whittaker, by checking to see if his fatal accident was reported in the newspaper. So, I went to Trove and looked up The Newcastle Morning Herald and, lo and behold, there was the melancholy report:

George Whittaker, 48, of Nelson Street, Mayfield, was fatally injured when he was jammed between the automatic couplings of two trucks which were being shunted at Teralba last night.

Whittaker, who was a railway guard, was rescued by several other railway employees, but when officers from Lake Macquarie ambulance arrived he was found to have sustained a fracture of the pelvis and spinal injuries. There was reason to believe that the spine had been fractured. He was rushed to the general hospital and admitted, but died at about 11 o’clock.

He’d been a railway guard for 10 years, having moved with his family from Narrandera (where he’d been a cabinet-maker) when work dried up in The Great Depression. His death plunged his family into abject poverty overnight.

My next search was for my maternal grandmother, and I found this surprisingly detailed account of her wedding, which added a lot of meaning to the wedding photo I already had:

The bride, who was given away by Mr Oscar Haviland, was attractively frocked in ivory crepe satin cut on Grecian lines. A graceful train was cut into the skirt and the corsage had its vest of Valenciennes lace finished with a spray of orange blossom. She wore a cameo brooch, almost 100 years old, lent by the bridegroom’s mother. The beautiful veil, lent by Mrs S. Fenton. was held by a coronet of small lilies. The bridal bouquet was of white camellia, stock, sweetpeas and carnations.

Miss Helen Witton, of Sydney, niece of the bride, was bridesmaid. Her becoming gown in duck-egg green toning was made in tunic style, the tunic banded with silver. She wore a silver headdress and carried a bouquet of pink camellia, sweet-peas and carnations.

The reception was held at the home of the bride’s mother, who featured a white georgette front trimmed with black and silver buttons on- her black silk marocain frock. The bride’s sister, Mrs Witton, wearing navy costume with eau de nil blouse, received the guests.

Anybody who goes rattling around in old family closets must consider the possibility that a skeleton or two might come tumbling out into the light. My paternal grandfather’s father provided a couple, including a very nasty one indeed. I didn’t know much about Ernest Henry Ray senior, except that he was a West Wallsend coalminer who had gone to The Great War aged 37 and served in a tunneling company. I knew that his wife had left him not long after his return and that his son – my grandfather, Ernest Henry junior – had apparently been sent off to a boys’ home at Mittagong, returning when he was 18 to work, marry and raise a family in Newcastle.

From news reports it seems he was a pub brawler before the war:

Ernest Ray pleaded guilty to having, at West Wallsend, on the 6th October, maliciously damaged six glasses, valued at 5d, the property of Thomas Watson. Prosecutor is the licensee of the Northumberland Hotel, West Wallsend. He produced the glasses which Ray had smashed by throwing at him. Defendant was fined 2s, and ordered to pay 2s damages, in default 14 days’ imprisonment, with hard labour.

Ernest Ray was also charged with having unlawfully assaulted Thomas Watson, at West Wallsend, on the 6th October. He pleaded not guilty. Prosecutor deposed that defendant had thrown a glass of beer in his face, and had thrown other glasses at him. One struck him in the right eye. Ray deposed that he paid for three or four drinks. A fly got into his glass, and he asked prosecutor to empty it out, and he would pay him. Watson refused to do so, and defendant threw the beer over him. Defendant was fined £3, or one month’s imprisonment with hard labour. Sub-Inspector McVane conducted the prosecution in each case.

Being away at the war didn’t improve him, apparently. While working as a gardener in Newcastle in December 1931, not long after his son’s wedding, he sexually assaulted a 13-year-old girl.

Ernest Henry Ray, 53, gardener, who was found guilty of having committed an offence on a girl under 16 at Hamilton in December, 1931, was sentenced to three years’ imprisonment.

His Honor said that a report submitted with regard to Ray’s alleged war injury was unsatisfactory. Mr Braye (for Ray) said that Ray had a wound in the head which, he had been informed, was caused by shrapnel.

His Honor: I must sentence you for a very serious offence, but representations may be made to me at any time as to any circumstances that might tend considerably to reduce the gravamen of the charge. For a man of your age it is a disgusting crime. I intend to treat it in a way that will teach men like you that young girls must be protected. If you had an ounce of manhood in you, you could not have been guilty of such a crime. I am not certain that the sentence I propose to inflict is severe enough. You are sentenced to three years’ hard labour. If you can show, as I hope for the sake of the reputation of humanity, some medical evidence to indicate that you have less power of resistance than a normal man, I am prepared to consider it.

I don’t know whether he managed to have his sentence reduced. I hope he didn’t. It’s very unpleasant to discover such a thing about an ancestor. But it was obviously infinitely more unpleasant for his victim and her family, for whom I feel profound sympathy. It seems to me that my great-grandfather’s wife had good reason to have left him.

Thankfully, most family references to be found in Trove are benign: prizes won at shows, performances at school concerts, family notices of various kinds. For anybody wanting to add some detail to their knowledge of their forebears, Trove offers a lot of potential. Just beware of the skeletons . . .

Bushland find a missing link for a vintage car project