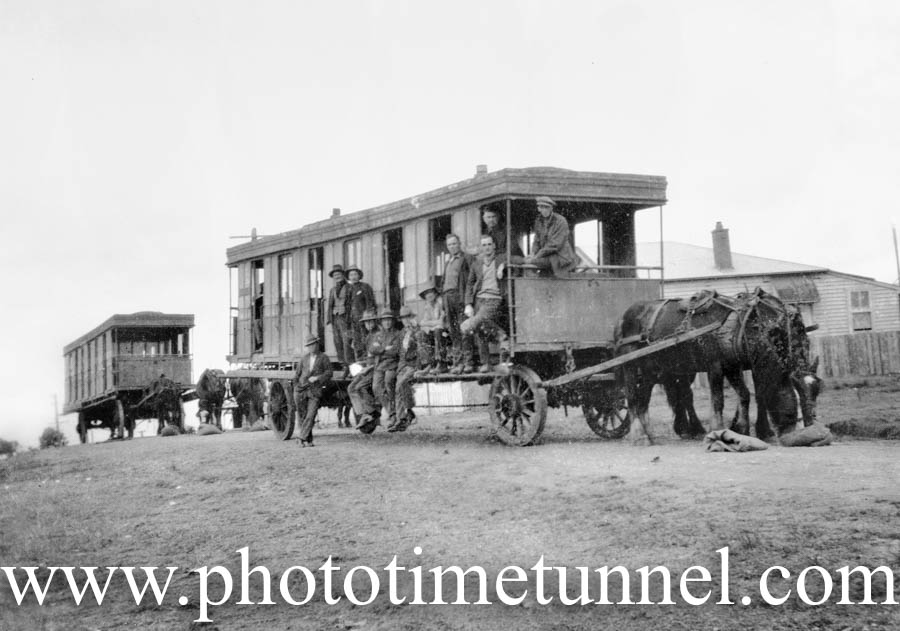 Old Waratah tramcars being towed to the bush as accommodation for single men in the Great Depression.

DURING the Great Depression hundreds of Hunter people lived in makeshift humpies cobbled together from whatever materials their owners could scrounge. Some of the camps were Nobbys Camp near Horseshoe Beach, “Texas” in Carrington, “Hollywood” (also known as “Doggyville”) at Jesmond, “Coral Trees” in Stockton and Platt’s Estate and “Tram Car” at Waratah.

According to researcher and author Dulcie Hartley, writing in her book The Hungry Thirties, Tram Car camp housed 17 men in four tram cars.

The pictures below show the birth of Tram Car camp. These photographs were among a collection of pictures gathered by the late Ken Magor. They were taken by former Newcastle Sun journalist C.K. (Charlie) Thompson, a well-known Waratah identity, author and amateur photographer, and were accompanied by a letter giving Mr Magor the background to the pictures.“It was during the 1929-32 depression and before all the Newcastle district councils were amalgamated,” Mr Thompson wrote. “I’m pretty sure that Sid Webb was Mayor of Waratah at the time. Waratah Council secured several old steam tram cars from the dept and hauled them to the bush at Waratah, gutted them and furnished them as homes for single male destitutes. The work was done by members of the Waratah-Mayfield Unemployed Association, and all the blokes in the snapshots were members of that association.”

Mr Thompson’s photos show the tramcars being hauled by teams of horses along roads and overland towards their destination, unemployed men (some with little children) posing with the cars and a car being unloaded from a low cart.

Charlie Thompson was born in about 1904 in East Maitland and enjoyed a long career in Newcastle journalism. He made his mark as a court reporter, using his experiences as the basis for many books and short stories. He was interested in acting and the entertainment industry and had a close association with the famous “Uncle Rex” Sinclair, for whom he edited an amateur theatrical magazine titled Sinclair’s Sparklers.

He wrote pulp novels during the 1940s but is perhaps best remembered for his series of children’s books about native animals. With titles such as King of the Ranges, Wombat, Tiger Cat and Maggie the Magnificent, these books showcased the author’s love of the bush and its creatures.

A story about the tramcars and Tramcar camp appears in our book, Travelling Through Time.

A post about another Depression settlement, alongside the Hunter River, can be found here.

Some odd pieces of photographic history