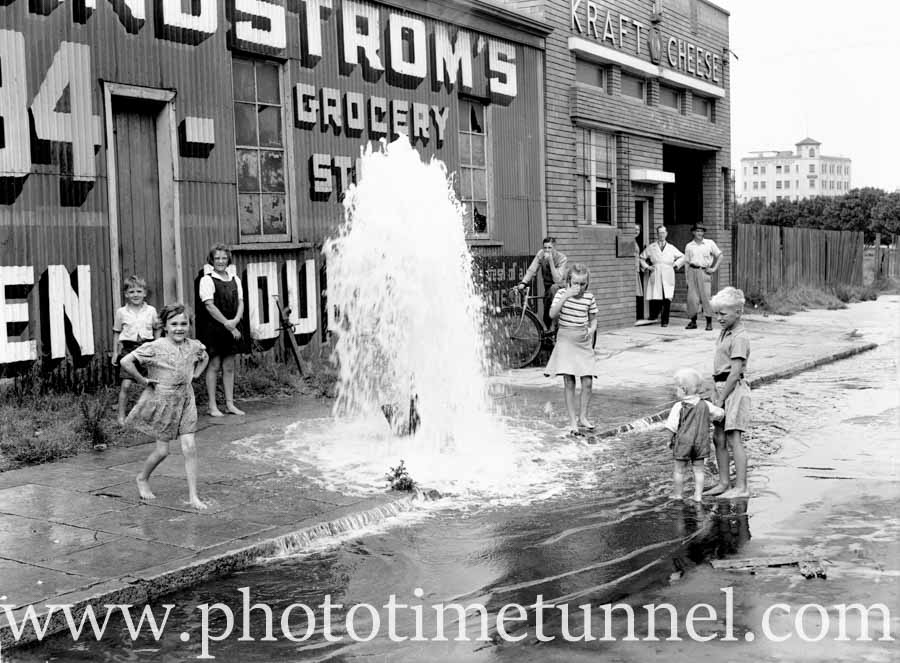 A broken water main on the corner of King and Darby Streets, Newcastle, NSW, January 26, 1945.

Believe it or not, this photograph was taken at the corner of King and Darby Streets, Newcastle, on Australia Day, 1945. A lug on a King Street hydrant had snapped off and for about 15 minutes some local children took advantage of the cooling spray. The photo is somewhat disorienting, since the buildings have long gone and the land they stood on is now part of Civic Park. Even the Salvation Army People’s Palace in the background has gone, making way for the Conservatorium of Music.

The photograph was taken for the press, presumably by a passing photographer who caught the event during the short time it was occurring. The way the photo was used in the next day’s paper is instructive as to how newspapers tended to use pictures in the 1940s. The lovely wide photo was cropped tightly, losing much of its charm.

When the full photo appeared in our 2010 book, Newcastle, The Missing Years, we were contacted by Beryl Sutton, from Sydney, who told us a friend in Queensland had seen the book and told Beryl that she was in it. Beryl described the photo as it appeared in the newspaper, long ago, not realising the published picture was a mere sliver of the entire photo. When we sent her a print, she was able to identify some of the other people in the picture.

The girl in the striped top (with hand to face) is Beryl Sutton. Her brother Robert is in the foreground, holding the hand of little brother Kevin (who now has seven grandchildren). The girl with hands on hips is Beryl Kibble, the girl in the tunic is Josie Young, and the boy nearest her is her brother Bobby.

The photo appears in our book, Newcastle, the Missing Years, and again – with the extra information – in the sequel, Recovered Memories.

Tintypes: oddities in the family album