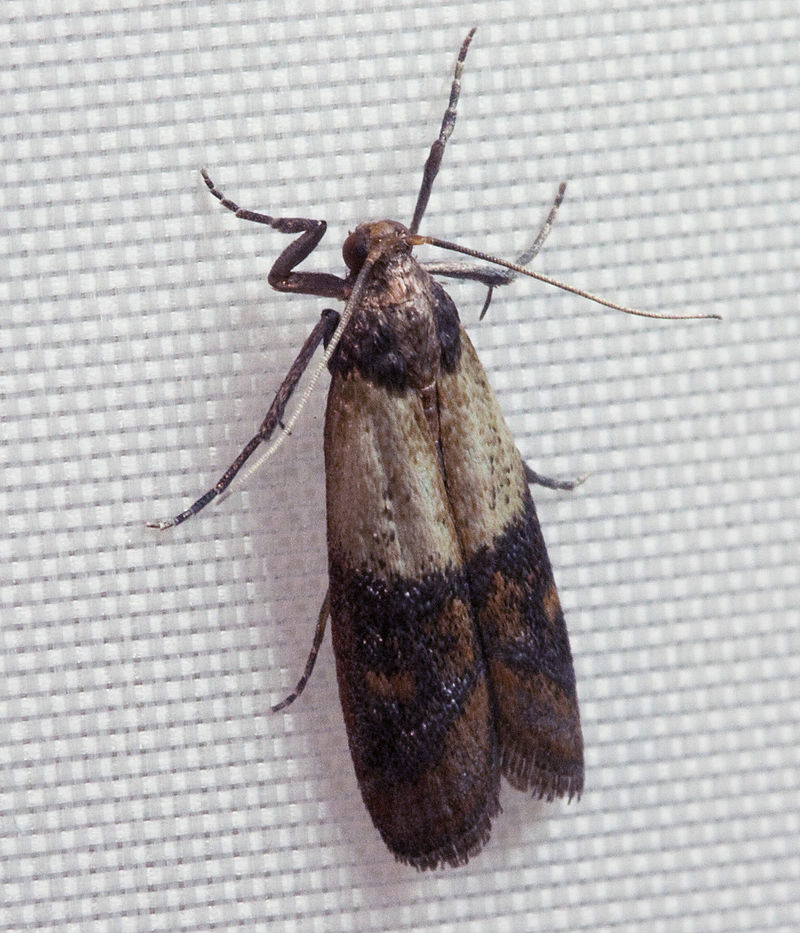 Pantry moths never seemed to appear in my mother’s kitchen, years ago, like they do in our kitchen today. Sure, you saw weevils very occasionally, but the regular infestations of pantry moths that we experience these days are not a thing I recall from my childhood.

I’m presuming you know about pantry moths because they seem a common feature in many households. They are small, nondescript-looking moths of a dull brownish-grey colour that fly out of the pantry when you open the door. Left to their own devices they will mate and lay eggs in whatever packets of food they can get into. The eggs hatch into tiny grubs which crawl around until they are ready to weave little cocoons in whatever nooks and crannies they fancy. They grow inside the cocoons, turn into moths and their life-cycle continues.

The first time I noticed them in a big way was when I spotted little yellowy grubs crawling across the ceiling. No sooner would I climb up and wipe one off than another would appear, and then another, and another. Soon I was regularly vacuuming the kitchen ceiling and fretting about where these things were coming from.

At first I thought maybe something had died in the ceiling cavity and that maggots were crawling through the wire holes of light-fittings into the house. So I climbed into the ceiling and found nothing to report.

Eventually it dawned on me, following much observation, that these little critters were the larval form of the annoying moths that seemed to constantly flit out of the food cupboards. A thorough search located infestations in some elderly packages of cereal food, and I found cocoons under the cardboard flaps of several boxes and cartons.

We had a huge clean-out and I expected that the problem would be solved. Imagine my surprise when the moths came back in very short order.

My next discovery was that, contrary to my original belief, the moths weren’t migrating from our house and garden into the pantry: it was the other way around. Time and again I found moths entombed in sealed packages of many types of cereal foods. Clearly, they were coming home from the supermarkets in these sealed packets.

Turns out that pantry moths, which are also known as Indian-meal moths or, if you prefer the formal Latin name – Plodia interpunctella – are among the most annoying and destructive food pests in the world.

The larvae, also known as wax worms, do the real damage, chomping on the grains on which their eggs were laid.

It seems that many packages of grain products you buy in the supermarket come with a pre-loaded supply of moth eggs, guaranteed to hatch in your pantry into very hungry caterpillars of a not-so-cute variety, and also probably pupae – equally guaranteed to hatch into sex-mad moths which will immediately start bonking in your food.

They seem remarkably equipped with some kind of escape tool kit which enables them to chew through certain types of unopened packages. But of course if you open the packet to start using the product inside, you make their escape job a lot easier.

My observation suggests that many of these critters are present in food packages from all parts of the world, so I’m not sure whether that should have been a quarantine issue at any point. (It’s obviously way too late by now.)

Once out of their packets they seek the company of other pantry moths, exuding chemicals called pheromones to attract one another. Once they hook up they spend their time mating, after which the female will go back to your pantry to lay her eggs in the place she knows the next generation of grubs will find good food.

They smell the sexy stuff, fly into the tents and get stuck on the flypaper, presumably dying slow and miserable deaths. I can guarantee the traps work, since in our house it only takes a month or two after setting for them to be full of dead moths.

Can you get rid of pantry moths? Some home-maker magazines recommend massive cupboard cleanouts and disinfection whenever the moths show up, but I don’t believe that’s really the answer. Obviously you have to throw away the visibly infested foodstuffs, but you must realise by now that many items in your cupboard probably have live eggs and pupae in them, just waiting to hatch or otherwise to be eaten by somebody like you.

I was told that a better way may be to freeze packets of grain-based product for a few days as soon as you get them home from the supermarket. We tried this and can confirm that it really works.

Frankly, I think that the importers ought to be responsible for freezing the food products before the packages even go on their shelves. Of course, that would cost money and effort and consequently eat into profit, so I suppose there is little incentive for them to do it.

And of course, freezing the goods for a few days before sale would hit supermarket profits in another way. Householders wouldn’t be constantly having to throw away and replace infested packages of food, so total sales volumes would drop.

And the market for pantry moth traps would dry up overnight.

Held to ransom by the 15 per cent