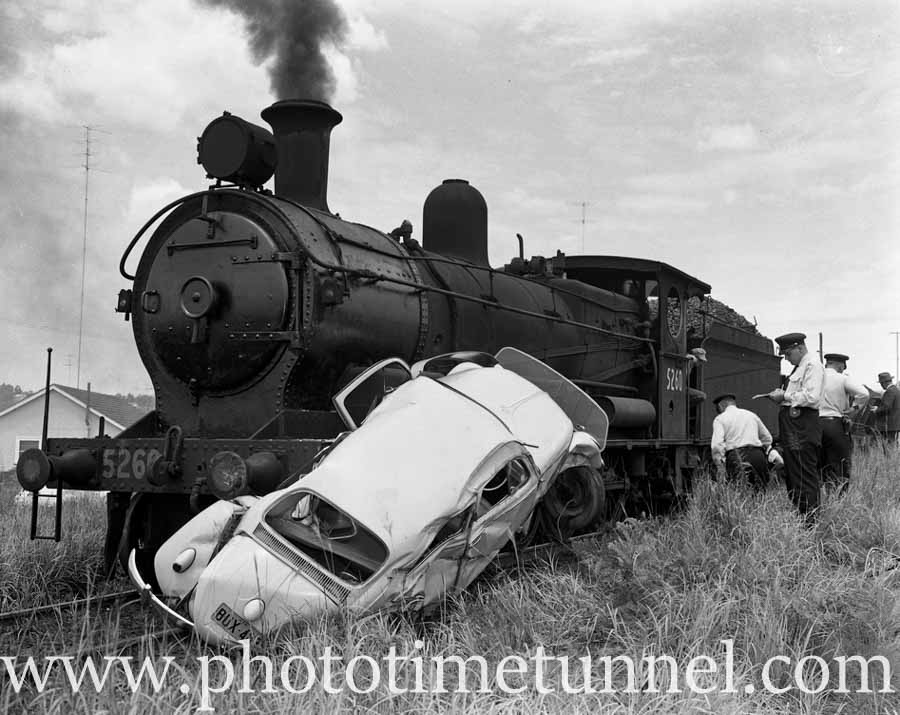 As a career fireman, transport collector Ken Magor naturally accumulated many photographs of accidents and disasters. Here are some of them, along with interesting stories that came to light after the photos were published.

After this photo appeared in our book Destination Newcastle, I received a letter from Laurie Bowman, of Charlestown, who told how he had been working that day as an electrician at the BHP. He had just finished a day shift and, as usual, bought a copy of the Newcastle Sun. The first story that caught his eye was an account of an accident involving a car and a train at Adamstown. The injured driver was named as Kathleen May Bowman – which was the name of Laurie’s wife.

Laurie’s initial panic was calmed a little when he remembered that his wife didn’t drive. He had seen his wife at home that morning, heavily pregnant with the couple’s first child. The very next day Laurie took his wife to the Mater Hospital at Waratah where she gave birth to their daughter, Susan.

It turned out that the Kathleen injured in the car accident worked at the cafe outside the Mater and was well-known to staff there. In fact, she had been taken to the hospital after the accident, and while one Kathleen May Bowman was in the maternity ward, the other was in the surgical department receiving care. “The result of this is that the two Kathleens’ mail was being misdirected, and Car Accident Kathy was receiving congratulations on the birth while Birthing Kathy was receiving get-well cards. This story has been told many times in our family and was re-awakened on seeing the photo in your book,” Laurie wrote.

When I published the above photograph in The Newcastle Herald I wasn’t sure of the location. But readers quickly identified it as the corner of Maitland Road and Carrington Street, Mayfield East.

Ron Maguire remembered the accident clearly. He was 13 at the time and was playing in Dangar Park when the truck heading from Tighes Hill was doing a U-turn at Carrington Street. There was a loud noise and Ron saw that the truck had clipped a shop-awning corner post and then crashed into a power pole. Its load of timber shifted and crushed the driver in the cab, killing him.

According to The Newcastle Sun article on the Trove website, the driver was Wilfred Avery, of Bulahdelah. His passenger, Joseph Mason, was injured in the accident. Timber was scattered all over the road and Avery’s body was only released from the mangled cab thanks to the electricity repair crew who had oxy cutting gear at hand.

Other readers had no information about the accident, but recalled the owners of the shop  as Ivy and Herbert McDowell.

Arthur Outtrim saw a photo of a bus crash in our book Recovered Memories and told us he witnessed the event, at the corner of Braye and Roe streets, Mayfield, on April 29, 1941. Arthur wrote: “I lived a couple of doors away and was having breakfast at the time before walking to Waratah Primary School (no school buses in those days).”

A Trove search shows that the house was occupied by Mr W.J. Kachel, his wife and two children Grahame, 11, (in photo) and Joy, 13. The bus had been on its way between Newcastle and the BHP steelworks at about 7.30am when it hit a utility and careered into the house. Mrs Kachel fainted and was treated for shock by ambulance officers. Nobody was badly hurt.

Arthur was especially interested in the postman on his bike in the group at the front of the house. “He was the highly respected and widely known Pat (Shea) the Postman. In those days the postmen pushed those heavy PMG bikes doing morning and afternoon deliveries as well as Saturday mornings. During wartime very many homes on the delivery route would have wives and mothers waiting for letters from loved ones on service overseas. The women would wait out the front for Pat to come along and from 100 yards away he would wave a letter. Not only would he deliver, he would stop and have a kind word.”

The Rose Stereograph Company: a snapshot