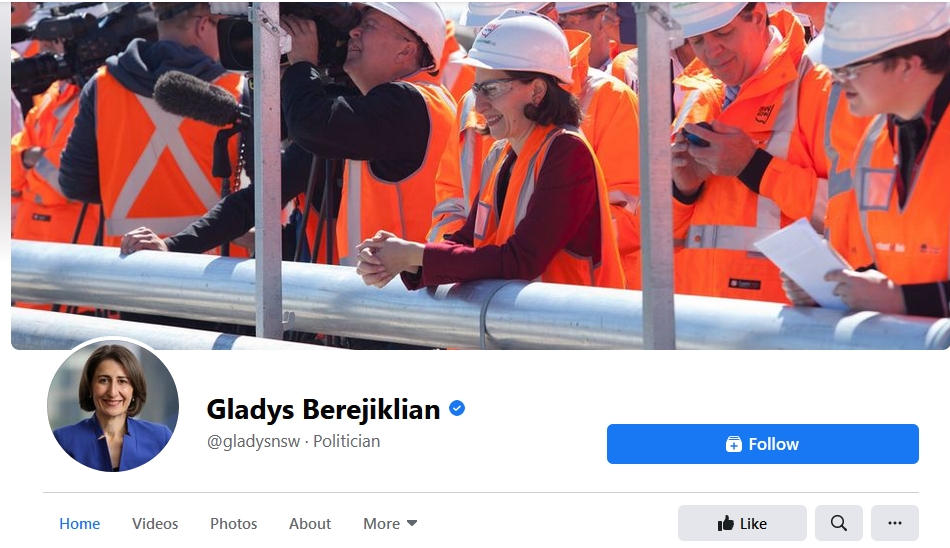 “Turning a blind eye” is what NSW Premier Gladys Berejiklian is in trouble for, apparently. She was in a close personal relationship with one of those shonky characters who infest the profession of politics in huge numbers, using their contacts to line their pockets, often at the expense of the public.

She knew that her boyfriend, disgraced Liberal MP Daryl Maguire, was a shonk. She had sacked him a couple of years ago, after all, for being exactly that. But since then our Glad was recorded on the phone to lover-boy, telling him that she didn’t need to know all the gory details of his shonkiness.

It seems she only gave him his marching orders (if that’s even true) after she became aware that she was going to have to front an inquiry into his dodgy deeds at which the relationship was going to become an issue.

So she’s in trouble for turning a blind eye.

But let’s get real for a minute about this “turning a blind eye” caper. I’m cranky at Gladys for the same thing, but not so much because she chose to ignore the fact that her intimate friend is an out-and-out shyster. I’m more shitty at Glad for turning a blind eye to a whole heap of other things.

Bled to death in emergency room

Did you hear, for example, that a 66-year-old woman bled to death in Gulgong Hospital’s emergency department? There was no doctor present at the hospital, and the woman was being “treated” by a doctor many kilometres away over a video link.

There was no doctor at the hospital because Gladys Berejiklian’s NSW Liberal/Coalition Government is presiding over a potentially dangerous downgrading of health services in rural and regional areas of the state. In June, Gulgong’s doctor was told his contract with the hospital wasn’t going to be renewed. And the non-profit organisation that has been providing doctors to hospitals at Bourke, Walgett, Lightning Ridge, Brewarrina, Coonamble and Collarenebri has also been told to go whistle dixie, since there are dollars to be saved by getting rid of doctors and replacing them with remote video links.

For years the government has crapped on about how doctors won’t go to rural and regional areas, but here’s a case where there are doctors on hand, and the government doesn’t want to hire them. So the best medical advice for residents or visitors in huge areas of NSW is don’t get sick on the days when there are no doctors in the hospitals, and if you are a candidate for heart attack or stroke then make sure you have your attack during business hours.

Where is Gladys, her health minister, or anybody at all from the NSW Parliament while this is happening? Turning a blind eye, perhaps.

Not good at building trains

In recent weeks Gladys famously proclaimed that NSW is “not good at building trains”, stunning those with knowledge of the history of manufacturing in the Premier State. Gladys was explaining why the state is better off shipping jobs and expertise to China and elsewhere, and enjoying the benefits of importing asbestos-laden ferries that don’t fit under bridges on the rivers they are bought to operate on, and buying foreign-built trains that don’t fit the state’s tracks or tunnels.

It takes a special kind of blind eye to come up with a whopper like that one, especially during a global pandemic when even the blind-as-a-bat prime minister of Australia admits the nation needs to get back its lost manufacturing mojo.

I suppose a lot of people would argue that it isn’t the premier’s fault that the state’s important public services are being ground into the dirt, and that jobs and expertise are exported every time the government prefers a foreign supplier to a local one. Some might say that’s not really a blind eye, but a conscious decision to save every last penny.

Well, if that’s true then telling Loverboy Maguire that she’d rather not hear the details of his shonky deals doesn’t really cut the mustard, does it?

If you were premier of NSW, and diligent about protecting the public good, then you’d want to make sure your dodgy bedmate wasn’t getting his fingers in the till somehow, wouldn’t you?

Premier Gladys leaves me cold. She’s not the worst, but she’s a hell of a long way from the best, and if her chief virtue is her ability to turn a blind eye, then she can have whatever’s coming to her.

A dip in the shark tank