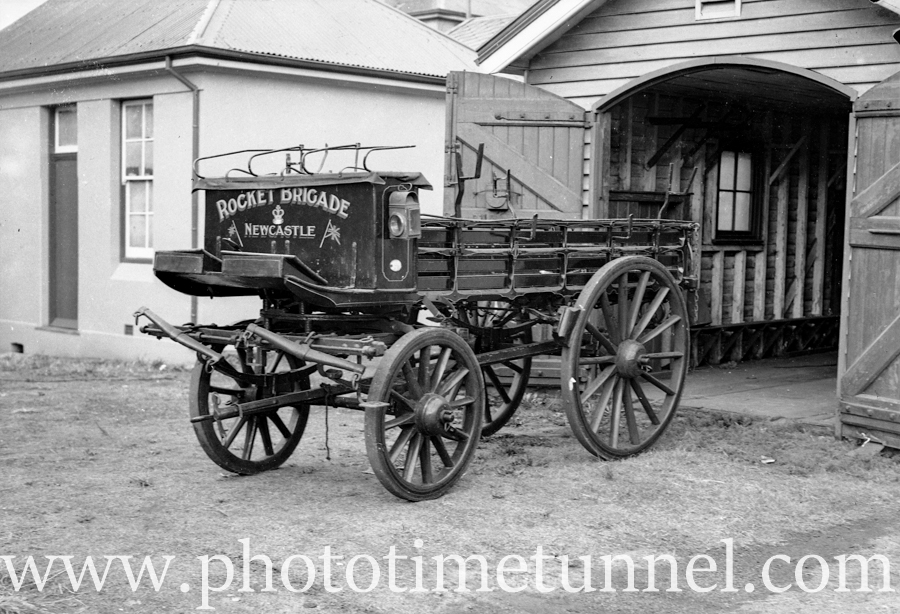 George William Manby was one of those people who just can’t stop inventing things. When he was just a kid, back in the 1770s, he made his own little rocket and used it to fire a line over a church near his home. I’m not sure what the church authorities had to say, but Manby never lost his enthusiasm for rockets.

According to the book Bar Safe, by Newcastle author Terry Callen, (it’s the sequel to his better-known Bar Dangerous), Manby was working as a barracks master near Yarmouth in 1807 when a gunboat called the Snipe ran aground. Dozens of people were drowned even though the ship foundered only 100 metres from shore, prompting Manby to recall his childhood adventure.

After a bit of experimenting he came up with a system that could fling a 24-pound shot (with a 20mm line attached) nearly 400 metres. Next time he was near a shipwreck Manby fired his apparatus and rescued the crew of the Elizabeth, winning the praise of the British government and a £6000 grant to start making more rocket launchers for installation around the coast. The basic idea was to fire a line aboard the grounded ship, then help the crew and passengers ashore using some sort of flying fox arrangement.

One of Manby’s rescue rocket devices was brought to Newcastle in the 1860s – to be replaced by some later improved designs by other inventors. Newcastle’s rocket brigade rescued plenty of people over the years.

An early beneficiary of Manby’s device in Newcastle was the schooner Lismore, which went ashore at Stockton during the fearful “Cawarra Gale” of July 1866. The Lismore was one of a number of vessels that tried to enter the port of Newcastle during the gale and it became one of the many casualties – the worst of which was the Cawarra (still the worst maritime tragedy in Newcastle’s history). According to press reports the Lismore had left Newcastle for Sydney with a load of coal for the city’s gas company. The current and waves were too strong for the schooner which was gradually push onto and over the dreaded Oyster Bank and forced ashore at Stockton. Other vessels had already washed ashore there, and many spectators and would-be helpers were there, including the rocket crew. Deeply laden, she grounded some way offshore, but the rocket crew got a line aboard and all the crew were saved. The wreck was sold not long afterward. A newspaper correspondent noted critically that: “in every case of the ill-fated vessels mentioned rounding Nobbys, the signal was hoisted at the signal station for the life-boat, but it was not sent out”.

One of its famous rescues was in 1914 when the collier Wallarah was wrecked at Catherine Hill Bay. The brigade of 14 men travelled across 26 miles of rough country in a cart drawn by four draught horses to rescue most of the ship’s crew.

Terry Callen writes that they left Newcastle at 11pm and didn’t get back until 5pm next day. The only food they had in that time was a breakfast they got, courtesy of the Wallarah colliery manager. Naturally their employers docked them all a day’s pay. After all, they had their seven pence a day rocket brigade retainer . . .

The rocket brigade’s last hurrah came on May 26, 1974, when the Norwegian bulk carrier Sygna went ashore on Stockton Beach. The rocket crew fired a line onto the grounded ship, and Newcastle Herald photographer Ken Robson took his famous photo of a motley crew of volunteers, rescuers and pressmen hauling the line taut. The photograph went around the world, a sort of last hurrah for George Manby’s strangely clever invention. Conditions weren’t ideal that day on Stockton, and a RAAF helicopter finished the rescue task.

What happened to Manby? Well, his friendly obsession with rescues and safety never left him, it seems. To the extent that he can be considered famous, it is for his invention of a fire extinguisher, a copper cylinder full of compressed air that could propel jets of water or potassium carbonate solutions at fires. He called it the “extincteur” and patented it in 1813.

Apparently he also invented some kind of set-up for catching people as they leapt from burning buildings, a technique for rescuing people who fell through ice into freezing water and an “unsinkable” lifeboat. The lifeboat did not catch on, since Manby himself had to be rescued from it as it sank beneath him.

Manby was a great pal of Lord Nelson, and late in his life he turned his home into a virtual Nelson museum. He wrote a memoir in 1851, modestly titled: A Summary of Services Rendered to the State, in Saving the Lives of Its Sailors from Shipwreck.

The water of remembrance